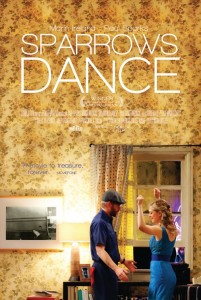 It can’t get any simpler than this.  Girl meets boy.  Boy meets girl.  They fall in love and live happily ever after.  Pretty cut and dry, pretty generic and probably wouldn’t even peak the interest of the least discerning of filmgoers.   The plot of Noah Buschel’s Sparrows Dance could be described just as simply.   However, there is more to this film then a sweet romance between two complete strangers.  In it an agoraphobic woman allows a plumber, Wes, into her apartment to fix her toilet.  While talking they find they have mutual interests and soon they become romantically involved.   While she very much wants to be with Wes she knows that her affliction will be very hard to overcome and that it could take away what they have together.

Sparrows Dance is very much like a one set, two-character play.    The opening third of the film introduces us to the Woman in Apartment, that’s how she’s credited.   Buschel doesn’t rush anything and just follows her around her apartment as she goes through her routine and isolated existence.  He doesn’t show his hand and allows the clues to fill the viewer in that she is an agoraphobic.   When she meets Wes we already know all we need to understand that this has the potential of being a very short affair.  Meeting Wes brings her out of her shell and as they grow more comfortable the more relaxed she becomes. But will it be enough to help her with her affliction?

Marin Ireland is very good as the Woman.   After viewing the film some quick reading on agoraphobia was in order and in hindsight she did a great job of portraying the anxiety an agoraphobic may face on a daily basis.  When in her element she can be a normal, articulate, outgoing person but when taken out of her comfort zone the nervous ticks and withdrawal and defensiveness occurs.  Ireland does a fine job of portraying both sides of the Woman.  Paul Sparks is also quite good as Wes.  While his part is not as showy as Ireland’s it is still an integral part to the story.   The two of them have a solid chemistry that is sweet and gentle and keeps the viewer engaged as they hope for the best for these two.

Noah Buschel and his cinematographer Ryan Samul shot the film in a very experimental fashion.  They seldom ever went with traditional framing or compositions for any given scene.  Blocking is off in one shot, dialogue occurs off screen in another, it’s as though they were intentionally putting the viewer in her shoes forcing them to feel the isolation and disconnection even though someone else is in the room.  Buschel has written a fairly unsophisticated screenplay that is brought to life by his two leads.   On page it’s good but when performed it’s better.

This gentle romance gives hope to the hopeless romantics that there’s someone out there for everyone.  Often times they’ll be in the last place you’d ever expect.  It’s also affirming by showing obstacles can be over come with the right support and motivation.  It’s a short, sweet and minimalistic film that is worth a look.