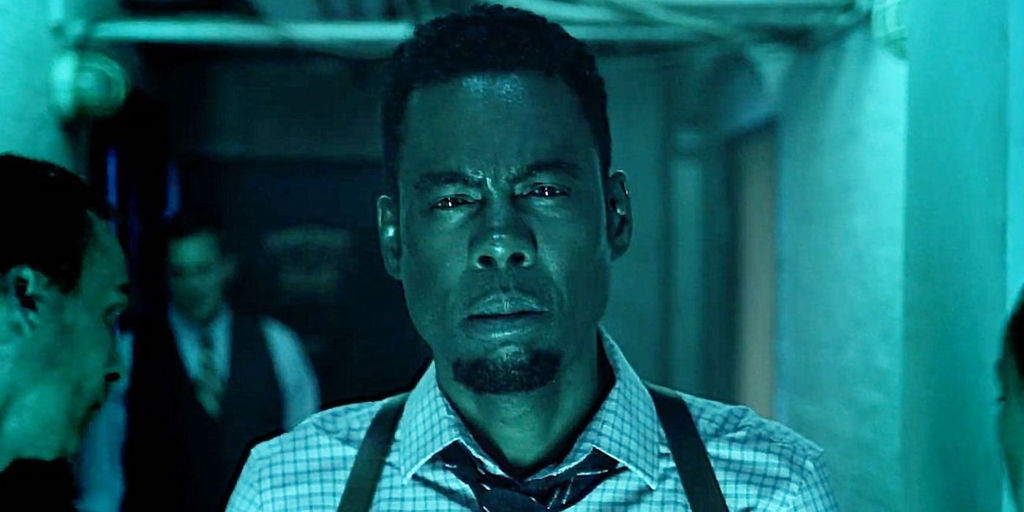 This is supposed to be a review about Spiral, the latest iteration of the Saw franchise, and I’ll get to that, but the more important item with this movie is that it’s the first thing I’ve seen in the theater in a year and three months, since seeing The Invisible Man while in New Zealand last February.

My wife and I have been fully vaccinated for over a month now, and with movies heading back to theaters, we decided it was time to get back into the multiplex. While I only had a slightly more than mild interest in the movie I had chosen to see, I knew that it would be a memorable experience regardless of how the film turned out simply because it had been so long since we had been at the cinema. Eschewing any semblance of my pandemic diet, I got my usual popcorn, candy, and Icee (Coke flavor, of course) and entered an auditorium that was completely empty on a Saturday afternoon.

I’m not ashamed to admit that, when the trailers began and the lights dimmed, I began getting choked up, as if being reunited with a friend from whom I had been separated from for some time. It’s corny; I know, but I thought I’d share anyway because it was a surprisingly emotional moment and one that will stick with me far longer than the movie I’m about to discuss.

As someone who moderately enjoyed most of the entries in the Saw series, I was very curious to see what Chris Rock envisioned when he came up with his own spin on Jigsaw and his wicked traps, but at the end of the day, Spiral feels like just another Saw movie, albeit with a couple more famous people involved and some timely social-justice themes.

Taking place in the same drab fictional city of the original films, Spiral opens with a police officer becoming the first victim of a new Jigsaw copycat, one who is specifically targeting crooked cops in what tries to be a pointed attempt at social commentary.

Rock plays detective Banks, the son of a retired and highly decorated captain, played by Samuel L. Jackson. Due to Banks having turned in a crooked cop earlier in his career, he’s labeled a snitch and a rat and draws the ire of his fellow officers, so there’s plenty of tension when the new Jigsaw appears to be sending him messages directly.

At its core, Spiral plays out like a mixture of Saw 1, with its ’90s-influenced, serial-killer-movie aesthetic and the later entries in the series, which have more elaborate and gruesome traps, though slightly toned down in comparison.

Darren Lynn Bousman, who previously helmed Saw II, III, and IV, returns to the series and brings back the more frantic camera style – a welcome, if not divisive, return to form that both makes it feel like it’s part of the series and makes it seem like a title produced at least a decade ago, which I don’t consider to be a bad thing.

One new addition to the series is a more robust narrative, with characters who are significantly more complex, and there’s a heavier emphasis on the police work rather than the victims attempting to survive the traps. This proves to be something of a double-edged sword. A deeper story is always welcome, but Sprial’s script is simply not up to snuff. Rock’s turn in a dramatic role is difficult to parse, especially because so many of the jokes written into the script either failed to land or weren’t intended as jokes. The snappy cop zingers are stale, and the grizzled cop banter is predictable and lame.

While it seemed like Rock’s vision of a Saw movie was going to elevate the stagnant franchise to a new, exciting level, the end result is just too similar to what we’ve seen eight times before. There’s some interesting stuff here, but nothing is as gnarly as one might expect.

The gore is surprisingly downplayed, and the procedural elements are dull and predictable. I wish the best for the series and I hope this isn’t the final nail in the series’ coffin, but perhaps expectations were simply too lofty for this one. Hey, at least it got me back into the theater, so I’m extremely thankful for that.