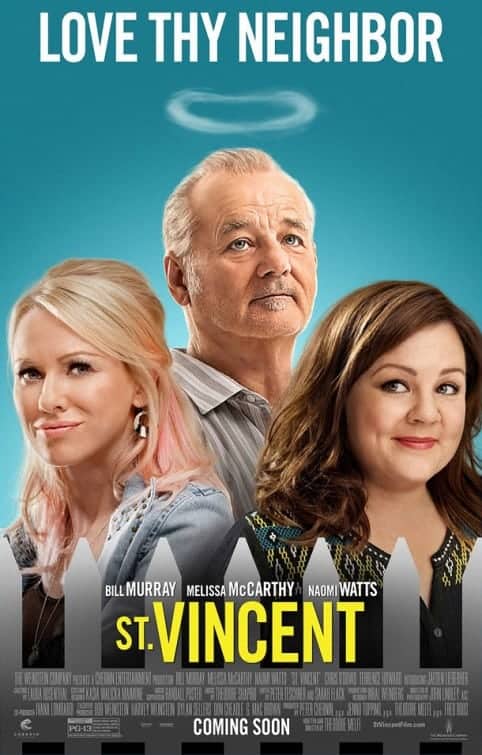 Theodore Melfi’s feature directorial debut looks like a fairly conventional piece of cinema. There are many conceits that may seem all too familiar to even the least discerning of audiences. On the surface, St. Vincent looks like a piece of feel-good cinema that could have easily been dismissed as nothing more than a TV movie of the week. Despite the material’s familiarity, Melfi manages to put together an entertaining feel-good comedy that features a solid cast who elevate the film altogether.

Under less than cordial circumstances, Maggie (Melissa McCarthy) and her son, Oliver (Jaeden Lieberher), meet their cantankerous neighbor Vincent (Bill Murray). Vincent isn’t very nice and doesn’t really come off as being much of a people person. Before Vincent even meets the neighbors, we see him in bed with a stripper who he can’t even pay. He’s certainly not the kind of person you would want to leave your kids with, but Oliver and Vincent are thrown together, thus beginning their journey.

If anyone else were cast in the film, it would likely have been dismissed like a cheesy TV special. Bill Murray truly shines in this film. Outside of a Wes Anderson film, Murray probably hasn’t portrayed such a rich, layered character since Bob Harris in Sofia Coppola’s Lost in Translation. Performance wise, his only flaw would have to be his Brooklyn accent, which disappears from time to time. Vincent is a fresh, original character, and it seems no one but Bill Murray could have brought him to life.

Not to be outdone is his co-star Jaeden Lieberher, who brilliantly plays Oliver. Lieberher makes a great feature film debut. Murray and Lieberher have great chemistry together, and their relationship is touching. It’s as though they’ve brought out the best in each other. The film also features a solid supporting cast. McCarthy is quite good as Oliver’s mother; Chris O’Dowd is amusing as a Catholic priest; and Naomi Watts is pretty funny as Vincent’s pregnant, Russian stripper girlfriend, Daka.

Melfi not only makes his feature film directorial debut with this film but also makes his writing debut. The screenplay, despite its air of familiarity, has some sharp dialogue and an engaging story with rich characters. The film could have easily been played as broad comedy, but it smartly earns the laughs through funny but relatable situations. It does get a bit maudlin during the last 10 to 15 minutes, but it’s quite forgivable thanks to our appreciation of the characters and the performances.

It’s the performances that’ll be most remembered, as well as the character of Vincent himself. True, this story is not entirely original, but it was successfully put together into a cohesive and entertaining film. There are moments where it does seem a bit trite and a bit melodramatic but, again, the performances make them palatable. As a feel-good movie, it serves its purpose and does it well, and sometimes that’s all you really need.