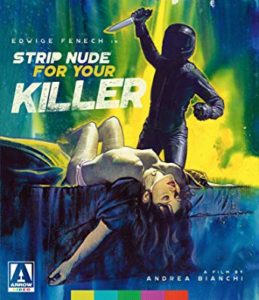 This product was provided by Arrow for the purpose of this review. All opinions are our own. Score reflects the product as a whole and not only the film.

As the 1970s wore on, the the giallo boom hit a fever pitch; filmmakers were scrambling to make something that set them apart from the seemingly never-ending onslaught of lurid murder mysteries. During this time the genre splintered into two extremes: more violence or more sex. In the case of Andrea Bianchi’s 1975 thriller Strip Nude for Your Killer, it was the latter.

After the opening scene, in which we witness two men covering up a botched abortion that leaves a young woman dead, we follow around Nino (Nino Castelnuovo), a pervy photographer whose sexist antics know no bounds. He revels in his misogyny so much that it would seem he’s trying to win an award for the biggest dirtbag in all of Italy.

He follows a young woman around a posh-looking resort, taking pictures of her physique with reckless abandon. To the surprise of everyone except the director, who must think women actually respond positively to this level of invasiveness, she ends up becoming his next model, sleeping with him first of course.

Unfortunately for Nino and everyone he’s involved with, a killer begins brutally slaying everyone around him, and now he must find the murderer’s identity before the police set their sights on him as the perpetrator. Aiding him in this investigation is his new girlfriend, Magda, played by the incomparable bombshell Edwige Fenech, one of the most recognizable women in Italian genre cinema.

Filled with near-constant and unnecessary nudity and a heavy dose of violence (though light on the gore compared to some of its brethren), Strip Nude For Your Killer doubles down on some of the more unsavory aspects of the giallo, while skimping on the elements that make it so great:  the visuals, narrative and score. It’s a passable, entertaining affair, with some solid performances, but it’s clear this is a film putting all its eggs in one basket – that basket being copious amounts of random nudity.

Arrow Video has performed a new 2K restoration from the original camera negative, but this is a bit of a mixed bag. The transfer looks good for the most part, but there are still a few moments of degradation, including a few wandering hairs that made their way onto the screen.

Interestingly, in addition to the English and Italian versions of the film, Arrow included the alternate blue-tint version, which was shown in some theaters. This has an altered opening sequence in which there’s a heavy blue tint over the video.

There’s a commentary track, a new video essay from Kat Ellinger (I love when they include these), a ton of new interviews, trailers, and an image gallery. The package contains a reversible cover, and the first printing includes a booklet with stills, an essay and technical specifications about the restoration.

As usual, Arrow knocked it out of the park with this release, but the film itself is a bit average aside from the presence of Edwige Fenech. Though certainly not the most empty of the gialli, it’s a forgettable endeavor that I won’t soon remember.