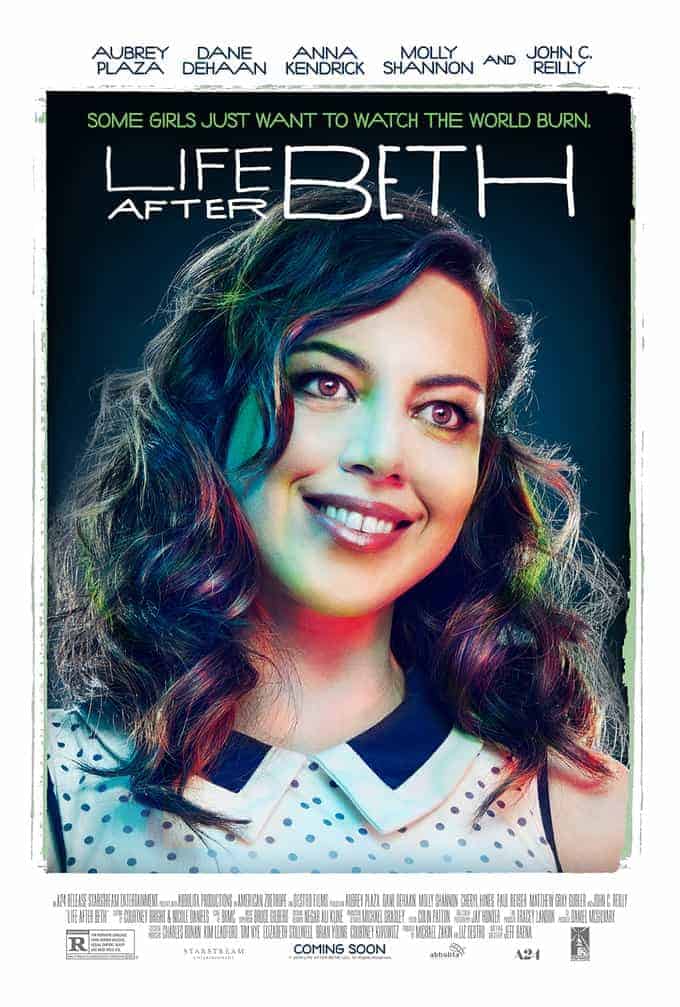 Jeff Baena’s Life After Beth brings a refreshing, and somewhat new take on the zombie comedy, but it never fully achieves the comedic gold it’s setting out to accomplish.  At times it proves to be very funny, but the inconsistent tone and shaky message prevent it from being something truly unique.

Dane DeHann stars as Zach, a grieving boyfriend who recently lost the love of his life, Beth, played by Aubrey Plaza, to a snake bite.  Zach is very close to Beth’s parents, played by Molly Shannon and John C. Riley, but suddenly they stop returning his calls and answering their door.  As Zach later finds out, the reason for this is because Beth has come back from the dead.  After reuniting with her he vows to say and do all the things he regretted not doing when she was alive.

While on the surface, this is a fairly straight forward zomedy in the same vein as My Boyfriend’s Back, however it’s really about the moments in a relationship that one should never take for granted.  It took Beth dying for Zach to realize that there was so much he wanted to tell her and so many experiences he missed out on while she was alive.  While this is certainly a noble message, the way in which it was delivered seems slightly manipulative and wrong.  Zach doesn’t tell Beth she died or that they were on the verge of breaking up beforehand.  Granted, this was at the request of her parents, but it still doesn’t feel right.

Aubrey Plaza’s performance makes up for many of the plot’s shortcomings however, with a stellar performance as Beth.  When she initially comes back from the dead, she’s seemingly normal, but as the days progress, so does her zombification.  Plaza handles this metamorphosis to great effect, and shows that she can be more than just a sarcastic pessimist like her character on Parks and Recreation.

DeHann delivered an expectedly great performance as well.  He nails the grieving boyfriend role, and his reactions to Beth’s various transformations is funny and how I would imagine one would react in that situation.

One of the surprise roles comes from Matthew Gray Gubler who plays Zach’s older brother.  He brings some extra comic relief to the story, acting as a gun-toting survivalist security guard, who, like most older brothers, is a complete dick.

Life After Beth is an enjoyable zombie flick that is generally funny, but not nearly as funny as it wants to be.  In a market overflowing with generic zombie movies however, this is certainly one that sets itself apart from the rest.