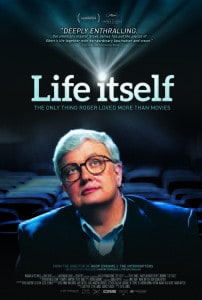 Steve James’ Life Itself is an impossible film to criticize in an objective way.  It’s a poignant, funny, and heartbreaking documentary about one of the most influential film critics ever, and someone that I’ve looked up to my whole life.  Thankfully, the film itself is actually quite well made, something we’ve come to expect from the director of Hoop Dreams.

Life Itself chronicles the life of prolific film critic Roger Ebert.  Although it’s structured like any typical talking head doc, there’s enough variety with the interviews, photographs, and clips to keep everything fresh and interesting throughout.

The most fascinating part about the film is that production was happening before Ebert’s passing last year, so there’s a lot of footage and interview content with Ebert himself.  This only adds to the undercurrent of sadness I felt throughout the film, even during the many upbeat moments.

James interviews many of Ebert’s friends, family, and colleagues, including some very powerful interviews with Gene Siskel’s wife, and Martin Scorsese.  Scorsese tells the story of how Ebert helped him beat his drug addiction and get back on the horse with directing, and it proves to be one of the most powerful moments in the film.  This is just one example of how far reaching Ebert’s words were within the world of film.

The documentary doesn’t shy away from pointing out the man’s flaws either, discussing his alcohol abuse and sometimes abrasive personality.  It doesn’t put him on a pedestal and it presents all the information very matter of factly.  Ebert himself stated he didn’t want anything left out of the film and it seemed important to him that people recognized he has flaws just like everyone else.

On a personal note, I was fortunate enough to see this film in a theater full of other critics, which enhanced the film in a way I didn’t expect.  There was a sense of camaraderie felt throughout the screening, almost as if the film was reminding us why we do what we do.  We love movies.  We love watching them and writing about them, and sharing them with others.  Beyond the bylines and pageviews we all just want to talk about a medium that has the power to be so impactful on our lives.

3 Responses to “LIFE ITSELF Review”