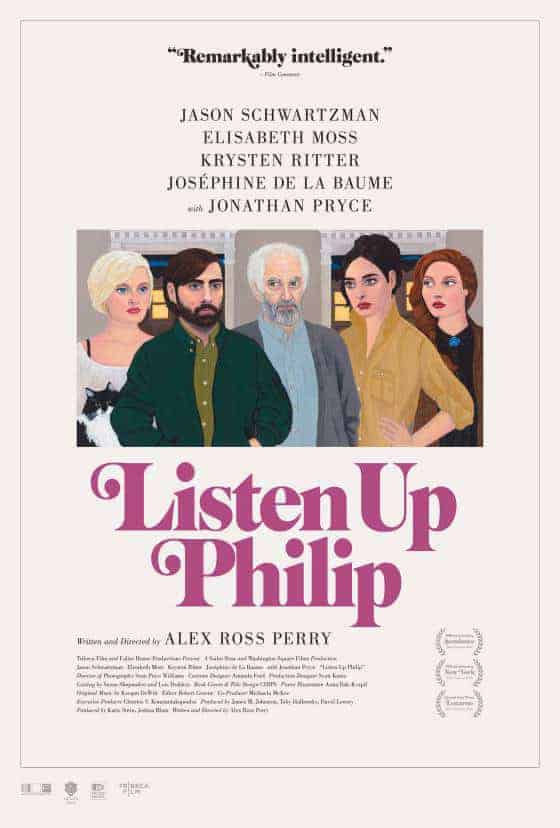 One of the most intriguing aspects to Alex Ross Perry’s Listen Up Philip will most assuredly be looked at as the biggest point of contention in the film. Although its central character, Philip (Jason Schwartzman), is featured prominently within the first and last acts, the middle of the movie detaches itself from him, resulting in an interesting narrative structure that will fascinate some and leave others disenchanted.

The film revolves around a self-involved writer who, upon the release of his second novel, finds himself lost within the world, alienating himself from everyone around him. Schwartzman plays the role well, almost as if it was designed specifically for him. Part Max Fischer from Rushmore and part Jonathan Ames from Bored to Death, Philip is a completely unlikable character whose self-loathing and blasé attitude poison all those around him.

Philip develops a friendship with a fellow writer Ike Zimmerman (Jonathan Pryce), whose personality mirrors that of his own. Philip looks up to Ike, and the two seem to become friends at just the right moment. Philip seeks validation and is delighted to hear that Ike, his idol, likes his new book. Ike is a lonely old man who seeks solace in grooming Philip in his own image. The two seem to feed off of each other’s misery, but the relationship could be described as toxic at best.

Elisabeth Moss plays Philip’s girlfriend, Ashley, who is becoming more and more disconnected from the relationship. Her career as a photographer begins to flourish, and she begins to resent Philip for not showing her enough support and not being a very good partner.

When looking at the structure of the film, Alex Ross Perry drew inspiration from The Recognitions by William Gaddis, which abandons the main protagonist halfway through and draws focus to the people who are affected by his life. This is the same thing that happens in Listen Up Philip. Although it seems jarring at first, it’s definitely a unique experiment that mostly worked to the film’s benefit. By spending more time with Ashley and Ike, we get to see how Philip has impacted their lives for better or worse and how they carry on with him out of the picture. The only downside of this structure was that I was so enamored with Philip I just wanted him back on the screen.

The film is told through narration, as if we’re watching an adaptation of a novel, which I normally find problematic, but it worked very well in this scenario. The dialogue is brilliant – fast, smart and incredibly funny. It seems that all these characters were written to have absolutely no filter. They are all so brutally honest with each other it makes for some very entertaining and awkward conversations.

Listen Up Philip is another hit from Alex Ross Perry, who is quickly becoming one of my favorite indie directors working today. His characters are complex, and I absolutely love his visual and dialogue choices. This isn’t necessarily a film for everyone, but after sitting with it for several days, I realize that it struck a chord with me, much like The Color Wheel before it.