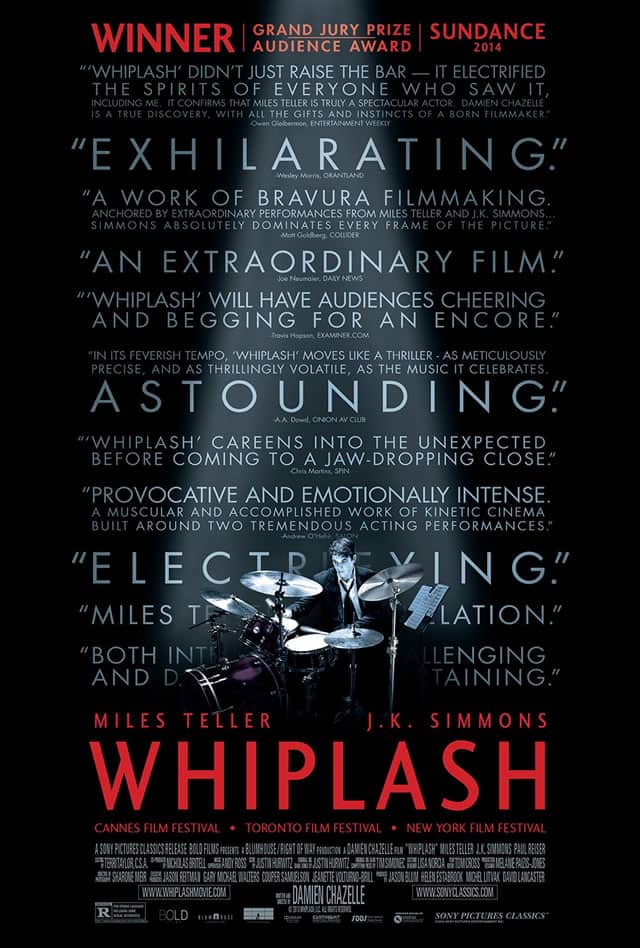 Of all the films that could be chosen to kick off the 2014 Sundance Film Festival, Damien Chazelle’s Whiplash seems like the perfect choice to start it with a bang.  This loud, intense film provides not only a captivating story, but also gives the viewer a complete sensory overload with its boisterous performances and amazingly percussive sound design.

The film stars Miles Teller as Andrew, a promising young student at a prestigious music conservatory in Manhattan.  Although Andrew is young, he’s brought under the wing of Terence Fletcher (J.K. Simmons), a brilliant yet abusive teacher.

Whiplash sets itself up as a typical performance-themed drama.  We have the young prodigious student striving to become the best, the neglected love interest, and the need to overcome seemingly insurmountable obstacles.  Fortunately, although it may have all these elements, the way in which the film presents them is far from the norm.  It doesn’t shy away from being as bold and complex as the music the characters are performing, and it doesn’t mind shocking the audience either.

There are two main elements that excel in Whiplash– the performances and the sound.  Miles Teller take another step towards a bona fide superstar in his role as Andrew.  Teller brings so much compassion and emotion to the role that he seamlessly embodies the character.  I don’t know if he was a drummer before this film, learned in preparation, or there was just some movie magic at work, but he nailed it.

J.K. Simmons as Mr. Fletcher is his strongest role to date, and a reminder of how amazing he can be.  The fact that this character can be funny, empathetic, quiet, then in a complete rage all in the matter of seconds is an impressive thing to pull off.

The sound design in Whiplash is the second element that makes this film stand out as a top contender of 2014.  In a film so focused on the music, one would expect that to be decent, and it is.  What might not be expected is that everything else, from the tightening of the snare, to the sticks lightly making contact with each other is impeccably done.  There’s just an astounding amount of detail spent on amplifying the most minute of sounds.

Whiplash will certainly be regarded as not only one of the best films of Sundance 2014, but could easily make it on a number of year-end top tens.  Having already been picked up for distribution, this is certainly one for look out for for 2014 and highly recommended viewing.