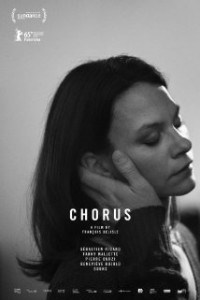 Chorus is a unique film in its composition and story. It is a quiet and unassuming film that surveys a couple’s reaction to the finding of their son – Hugo – whose body is discovered 10 years after he went missing.

The film opens with a man confessing to Hugo’s disappearance. He is calm as he recounts the events surrounding Hugo’s final hours; it is a chilling display.

The perspective then switches to that of Hugo’s parents, Irene (Fanny Mallette) and Christophe (Sébastien Ricard), who appear to be a couple that is separated or possibly divorced. She is in Montreal, and he has been in Mexico since their son’s disappearance. When Irene is told that Hugo’s body has been found, she calls Christophe, who agrees to fly to Montreal to be there for her during this tragic time, ultimately having sexual relations as either some form of shared grief or release of emotions they are both struggling to understand.

There is little to this French-Canadian film, but the gist of the story is that it is one of two people living with the disappearance and then discovery of their son’s body. They have reacted in different ways. Christophe left the site of their son’s demise a decade earlier and moved all the way to Mexico in what was probably a way of escaping what happened to Hugo. He is seen having sexual relations with a woman in Mexico, apparently having no thought for his son or for Irene.  Or perhaps just moving forward is his way of coping.

Irene has stayed in Montreal where it all happened 10 years ago, and she has never forgotten or gotten over Hugo’s disappearance. At one point, Irene says, “Time does not heal.” She has her outlet singing in a small choral group, but the pain of losing Hugo stays with her always. The estranged couple comforts one another in their own way, and the two coming together was both heart wrenching and heartwarming to watch.

By and large, the film may be a bit too sparse to sink one’s teeth into, but it’s a fine film, with understated black-and-white cinematography and beautiful performances from Mallette and Ricard. I recommend it for anyone who likes incredibly simple films that do not rely on plot as much as they do emotion and character development.