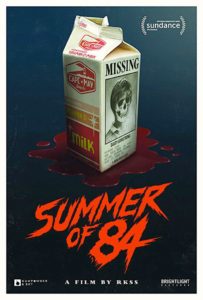 This is a repost of our review from Sundance 2018. Summer of ’84 opens Friday.

In their second feature after the wonderful Turbo Kid, filmmaking collective RKSS (Anouk Whissell, François Simard and Yoann-Karl Whissell) take us back to the ‘80s and hits our nostalgia bone hard with Summer of ’84, an homage to genre films from the best decade.

Summer of ’84 wears its influences on its sleeve, something that becomes evident within the first ten minutes of the film, when we’re introduced to our main cast of characters. Davey is a 15-year-old kid eager to begin his summer playing manhunt with his buddies and reading about the latest conspiracy theories and alien sightings.

When news breaks that there’s a serial killer on the loose near his town, Davey is only mildly interested until he begins witnessing some strange behavior by his neighbor, Mackey, who happens to be a police officer. Now Davey and his friends must uncover the truth about their neighbor before the killer claims another victim.

Though Summer of ’84 has a noticeable Amblin vibe and plays with similar themes, the filmmakers are quick to distinguish themselves from the family-friendly side of things by having the boys truly be adolescent teens, with dirty mouths and dirtier minds. The dialogue is more akin to Stand By Me than The Goonies. This banter works for the most part, but not all the jokes land, and at times it begins to feel like it’s happening far to frequently.

Also a notable departure from something Spielberg may have cooked up is the level of violence contained within the narrative. While it’s a far cry from what we got with Turbo Kid, and I was kind of shocked at how restrained it is, there are a few moments, notably in the final act, that ramp up the horror aspects of the film. The finale is also not indicative of one of those movies, something it seems that RKSS did deliberately to subvert all expectations.

Rich Sommer’s portrayal of the suspected killer, Wayne Mackey, is spot on; his nice-guy persona lends itself perfectly to someone who may or may not be a sadistic serial killer. Simply due to the logic of the film, you’re always pretty sure he’s the guy, but Sommer’s performance is consistently making you doubt yourself. 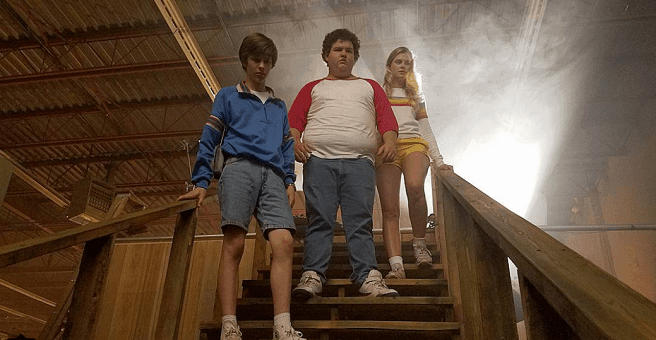 The plot is laid out very similarly to Joe Dante’s masterpiece (at least in my opinion), The ’Burbs, with Davey and the gang spying on the neighbor, collecting evidence and desperately trying to get others to believe them. There’s even one specific shot lifted directly from The ’Burbs though I don’t know if it was intentional. Bonus points if you can tell me which one.

RKSS incorporated a surprising amount of depth within their characters, giving us slight glimpses into the home lives of each of the kids, subtly developing each of them without having it feel too expository or tacked on. This further advances our rapport with these kids and almost begs for a sequel so we can spend more time with them.

Although it doesn’t hit the same peaks that Turbo Kid did, Summer of ’84 is a fun throwback film for those wanting some solid ’80s nostalgia who also maybe want something more adult than Stranger Things.