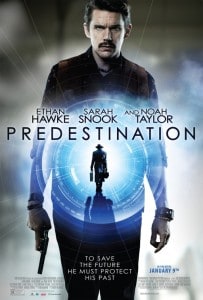 Predestination is the latest adaptation from famed science fiction author Robert Heinlein who penned such classics as Starship Troopers and The Puppet Masters.  Directed by Michael and Peter Spierig, this mind bending time travel film features some very unique concepts, however many of the twists are too easily predicted despite some genuinely crazy things taking place.  That being said, this does provide a very fresh spin on the quickly becoming overplayed time travel movie.

Predestination begins with it feeling like Looper, with Ethan Hawke describing that he works for an agency who travels through time to prevent big crimes from taking place.  We find out that he’s on the hunt for a man known as “The Fizzle Bomber” who has been blowing up buildings all across the city.  After failing several times, he decides to give it one more go and winds up meeting a young man at a bar who he begins a conversation with.

As the man begins to tell his story we shift perspectives and follow them from a child all the way through adulthood and begin to learn why this person is vital to Hawke’s mission.

To divulge anymore plot details would be heading into spoiler territory, as this is a movie that’s best to go in completely cold.  As I said, many of the big twists are easily predicted if you’re paying attention, which renders the big reveals less shocking but still crazy nonetheless.

Having not read the original short story this is based on, I can’t comment on how faithful the film is to the source material, however according to the directors at the Q and A after the screening they kept everything in from the original and simply expanded on certain character details to flesh it out for a feature length film.  Unfortunately, this causes the film to feel splintered, with one part being a tragic story of a girl’s life, and another part being a time travel adventure.  It’s not to say that both parts weren’t compelling in their own right, but every time we head back to the girl’s story the movie loses momentum.

Visually, the film looks great, capitalizing on the various time periods we enter.  The time travel effect is simple, like Looper, but very effective.  The makeup effects are also incredibly well done, making a fairly convincing transformation occur without the aid of prosthetics or digital effects.  There was some compositing or digital enhancements during a couple crucial scenes, but those looked pretty good as well.

While Ethan Hawke is consistently good in whatever kind of role he’s given, Sarah Snook brings the most to this film mostly due to what her character goes through.  Her performance is powerful and heartbreaking, and she handles this emotionally complex character with ease and grace.

Predestination is a solid time travel movie that isn’t without flaws, but it’s still a thought provoking and crazy ride.  Although it dragged at certain points and could have been tighter, it’s still fun to wrap your head around what you just saw after the end credits roll.

One Response to “PREDESTINATION Review”