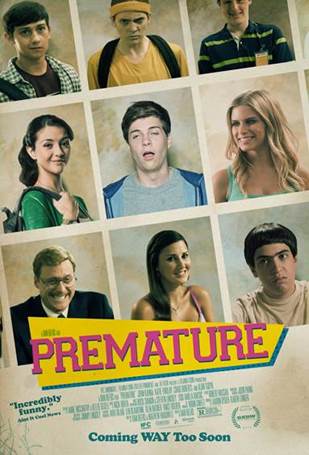 What if instead of a light, family-friendly comedy, Harold Ramis’ beloved Groundhog Day was a raunchy teen sex comedy?  That’s what director Dan Beers must have been thinking about when setting out to create Premature.  The film takes the living the same day over and over mechanic and transplants it into an R-rated sex fest filled with dirty jokes and bodily fluids.  For what it is, is mostly works and is at times laugh out loud funny, but the gimmick wears out its welcome and the humor loses steam as it progresses.

Premature begins with star John Karna as Rob, a dorky virgin who wakes up in a pool of his own fluids after a rather torrid and unusual sex dream.  His big college interview is today, so he gets dressed up and bikes to school after meeting up with his foul-mouthed buddy played by Craig Roberts.

After an embarrassing and hellish day, he winds up at the home of Angela (Carlson Young), one of the easiest and most attractive girls in school, for a late night tutoring session.  Things heat up, but as soon as Angela touches Rob he has an orgasm and immediately wakes up to his mother walking in on him, just like before.  Things repeat over and over until Rob realizes that there’s a reason behind it all.  Now Rob must right this cosmic wrong or else be trapped in the same miserable day forever.

The film starts off very funny, even for a teen sex comedy, which I tend to avoid as a general rule.  The dialogue is sharp and all the actors give great performances.  John Karna acts like a younger version SNL’s Taran Killam and plays the unlucky dork role perfectly.  His timing and facial expressions are hilarious and he carrying most of the film’s comedic weight on his shoulders.

Alan Tudyk as Rob’s Georgetown interviewer also gives a great performance, although his overly emotional character grew tiresome by the end of the film.  The first time the two meet is absolutely hilarious however, and one of the most awkward interview scenes I’ve witnessed in a movie.

Rob’s two besties throughout his little journey of self-discovery are played by the wonderful Craig Roberts and Katie Findlay.  Roberts is a good comedic actor and was fantastic in Submarine, but the sex-crazed and borderline racist character he plays does little for the film.  Findlay plays the girl next-door type that you know Rob simply has to end up with.  She plays this part well and makes us really want these two to get together.

Unfortunately, after the fourth or fifth trip back to the same day, Premature’s momentum grinds to a halt.  The jokes tend to become more sparse and the silly love story begins to creep in.  The laughs feel cheaper, relying on shots of Rob getting kicked in the nuts or jerking off in the principal’s office.

This is a film that is perfectly suited for a casual VOD rental on a Sunday afternoon.  It may borrow a little too heavily from Groundhog Day and the lowbrow humor loses its luster by the second act, but there are still some solid laughs and a few very fun performances.