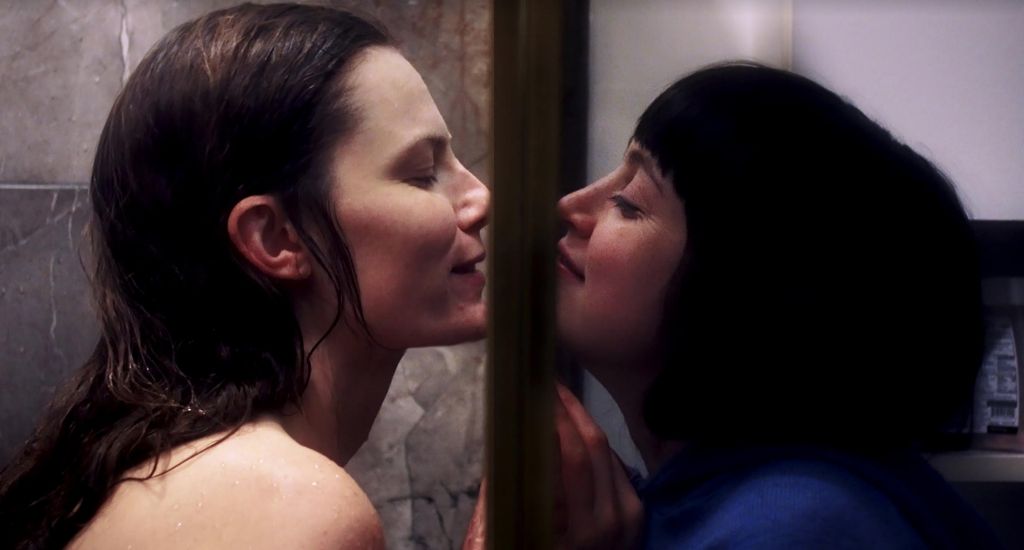 Being the spouse of a sleeptalker (and to the person editing this review right now, love you!), I often find it fascinating what goes on in individuals’ minds during sleep. I’ve had full-blown conversations with her, only to discover she’s been unconscious the whole time, which I guess explains the often bizarre series of interactions we’ll later have.

Director Caleb Michael Johnson used his own partner’s sleepwalking and talking as inspiration for The Carnivores, an exploration into a relationship during a turbulent event that incorporates these nocturnal adventures. Lindsay Burdge and Tallie Medel play Bret and Alice, a couple struggling through an expensive series of treatments for Bret’s dog, Harvie, a process that’s putting a strain on their relationship as Bret focuses all her attention on him rather than on Alice.

As Bret continues to emotionally and physically neglect her partner, Alice begins sleepwalking at night, waking up in random places outdoors, sometimes with Harvie. She’s keeping track of her sleep and her sex life in a journal, both of which have been sparse to say the least.

Her subconscious resentment for Harvie grows as her lack of sleep begins affecting her daily life and leads to increasingly bizarre sleepwalking events. She becomes obsessed with meat, fixated on it in her dreams and allowing it to bleed into her waking life as well.

Johnson adeptly dives into how our emotional state can manifest itself within our unconscious thoughts, showing us how Alice’s jealousy of Harvie consumes her, first by simply wanting to get rid of him and then causing her to adopt animalistic traits in order to win this perceived competition for Bret’s affection. It’s all well represented both visually and from a character perspective, with Medel once again proving her range and thoughtfully portraying someone who both sympathizes with her partner’s emotional state while simultaneously exhibiting a selfish, almost destructive reaction to the situation.

Meanwhile, Bret neglects to even recognize that Alice is losing it, putting 100 percent of her focus on Harvie, spending every moment with him and then totally losing it when he ends up missing. She barely even questions her after Alice seems to know where Harvie went missing, and despite Alice trying to hide her sleepwalking, I think most devoted couples would  recognize it when something’s up with their significant others.

It’s hard to lose a pet. I’ve been there myself, but the last thing the grieving should do is alienate and neglect their loved ones, the people who will be their support system when the inevitable does occur. Burdge has a knack for playing roles that involve her character slowly cracking, and while we don’t see Bret completely break from reality, she comes dangerously close and Burdge unsurprisingly excels in her performance.

Clocking in at a brisk 77 minutes, the film could have done with a bit of a bigger arc for both Bret and Alice; the climax wasn’t quite as bombastic as the lead-up would indicate, but the ending really worked thanks to its two strong lead performances. Johnson’s second feature (after the wonderful Joy Kevin) has a deeper complexity than his first and provides a thought-provoking story about love and obsession.