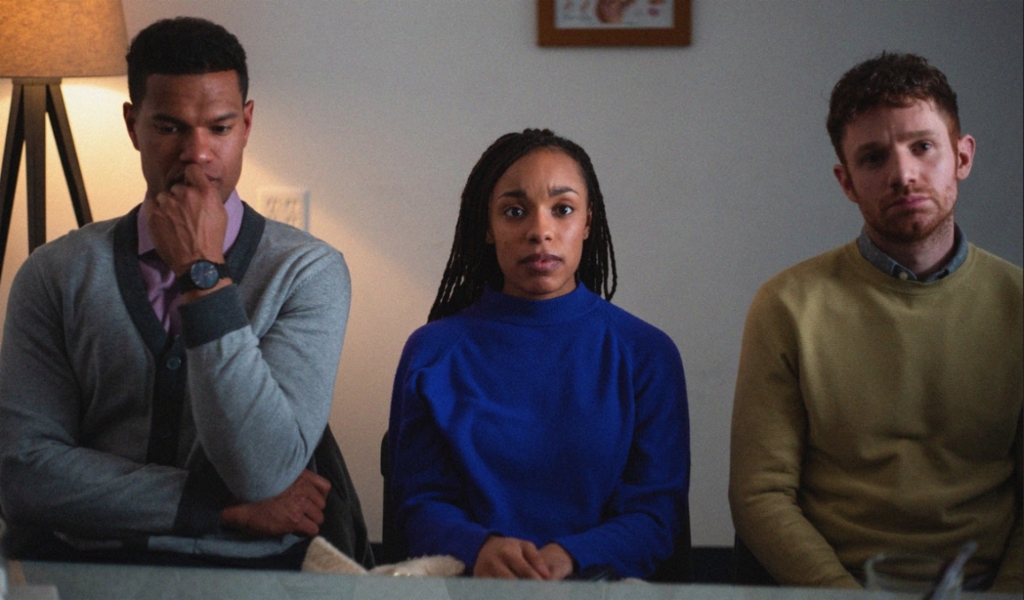 This is a repost of our review from SXSW 2020. The Surrogate opens on VOD platforms Friday.

The concept of surrogacy can be a tricky thing to navigate for couples looking to it as an option for having their own children, but Jeremy Hersh’s thoughtfully written drama, The Surrogate, explores an additional complexity in an arrangement already rife with potential conflict.

Presented through a natural veneer focused on realism, the film stars Jasmine Batchelor as Jess, a young woman who has agreed to be a surrogate for her two best friends, Josh (Chris Perfetti) and Aaron (Sullivan Jones). Jess’ exuberant, infectious and sometimes overwhelming amount of positive energy appears to be unflappable, even after being told that their baby will most likely require special needs due to a genetic disorder.

Shaken by the news, Josh and Aaron begin doing research and visiting a local youth center that specializes in children with this disorder, Down Syndrome, at Jess’ urging. She attempts to make friends with some of the other parents and to prepare her friends the best she can for parenting a special-needs child, but it quickly becomes clear they don’t share her optimism.

After they break the news to Jess that they want her to have an abortion, she initially says she will honor their decision; after all this ultimately won’t really be her child…she’s just “the vessel.” Jess begins having second thoughts, however, despite the rift it creates between her and Josh and Aaron. It creates yet another rift with her parents, who believe she should honor the wishes of the would-be parents.

Hersch’s story is not one with a clearly defined right and wrong, nor does it hypothesize on which decision is the morally correct one. This is a complicated scenario, and Hersch navigates through it in a concise manner, never having the film choose a side and leaving it to the audience to ruminate on the topic, drawing its own conclusions. Of course, as a viewer it’s easy to say how you would react in the same scenario, but it’s impossible to fully understand the emotional toll this would have unless you’ve experienced it yourself.

The film begins to drag in the second act as Jess b grapples with her decision to terminate the pregnancy, but Batchelor’s stand-out performance aids in weathering the lack of progression that occurs. After the two distinct viewpoints are established, the film’s purpose pivots to following Jess through this ordeal as she realizes she has a much bigger attachment to this baby than she initially thought, but this is perhaps where the realism gets in the way of presenting an entertaining piece of media.

Despite this however, The Surrogate picks back up in its final moments, leading to a risky conclusion that some may find frustrating but fits perfectly within the rest of the overall tone: that is —to raise questions and not answers, resulting in a thought-provoking, well-performed, and well-written indie drama that’s well worth a look.