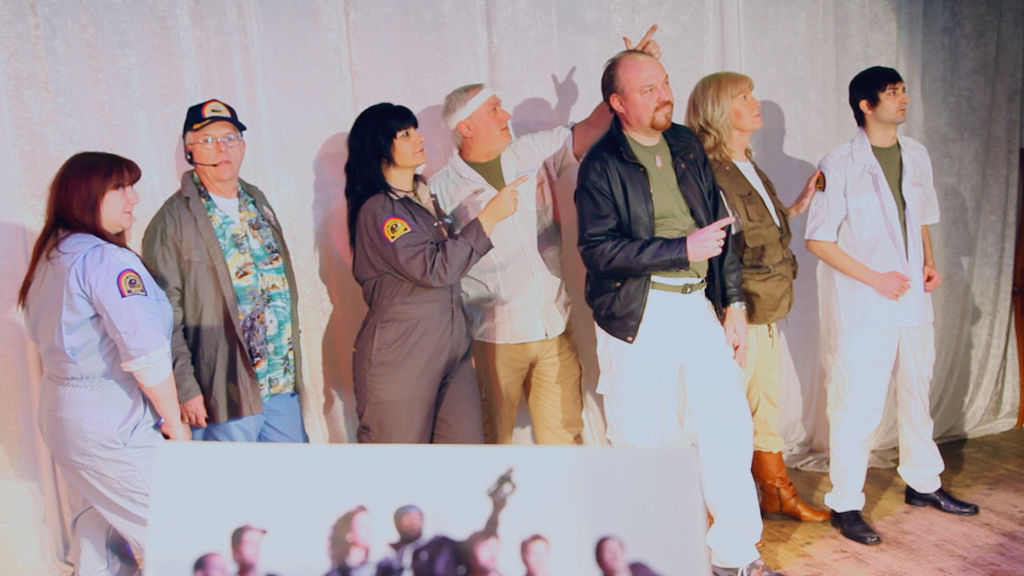 What happens when you combine a fleet of public transportation employees, a stage, a classic sci-fi horror film directed by Ridley Scott, and an endless spark of creative ingenuity? You get the West End production of “Alien…on Stage,” an amateur, from-scratch stage adaptation put on by a cast and crew of Dorset natives that has more heart and inventiveness than production budget.

In Lucy Harvey and Danielle Kummer’s in-depth chronicle of the surprise cult hit, we are brought along for the journey from the innocent suggestion of staging an adaptation of one of the most beloved science-fiction films of all time and the snowballing popularity it received when it somehow found itself debuting on London’s West End to a sold-out theater of whooping and cheering patrons.

The film’s arc is very straightforward, and it doesn’t take long to see where the charm to this story lies. Like the lo-fi constraints of the “sweded” films, such as Michel Gondry’s Be Kind Rewind, the hapless, colorful collective of bus drivers are abundantly aware of what they can and can’t pull off within their amateur means and work with creative abandon to shrink down Scott’s and Alien art director Michael Seymour’s monumental vision to a size that can fit on their humble community theater stage in Dorset.

The cast and crew constantly experience doubts as their makeshift sets get assembled, their bulky xenomorph suit is slapped together, and their cast of amateur actors stumble awkwardly through Dan O’Bannon’s iconic dialogue, but nevertheless, the indomitable  spirit is on display front and center in Harvey and Kummer’s fawning portrait of their production.  It is near impossible not to get charmed by their inspirations, laugh along with their fumbles, and appreciate their effort in making it all work as best they can.

The cast and crew provide a delightful presence in Alien on Stage based on how utterly ordinary they are and how deeply they throw themselves behind this community theater project. Some stand out (Dave, the overly stressed director; Jason, the monotone Dallas; the small crew of nonprofessional technicians and special effects creators who constantly rack their brains on how to innovate without the production budget of Twentieth Century Fox), but the film shines mostly as a collective portrait.

The frankness and honesty they display as their presumed faithful adaptation dips into farcical territory due to their inexperience followed by the mounting enthusiasm they feel as they find an audience is immensely entertaining. The film holds no illusions of grandeur or misunderstood artistic vision in their community theater circle like we see in the farcical comedic stylings of Waiting for Guffman. This crew of bus drivers and non professionals are overtly genuine, and the effect is infectiously endearing.

Whether or not they were “successful” in adapting Alien to the stage is irrelevant to the film’s campy indulgence in the process of its creation and the mundanity of its scope. In the realm of fandom when we routinely cheer on the efforts of dedicated, creative individuals, such as films like Raiders!: The Story of the Greatest Fan Film Ever Made attest to, the supposed accuracy is never the point.

Alien on Stage is not the level of faithfulness as we have seen with the recent trend in film-to-musical adaptations, such as Evil Dead, Beetlejuice and Spongebob, but the creative spirit, lo-fi imagination and willingness to laugh at themselves and recognize the oddity they are producing remains enchanting. Whether you are a fan of the “so bad it’s good” style of comedy or just like to marvel at charming amateurs trying their damndest, Alien on Stage is a lovely and entertaining film that could put a smile on even the most hard-hearted theater critic’s face.