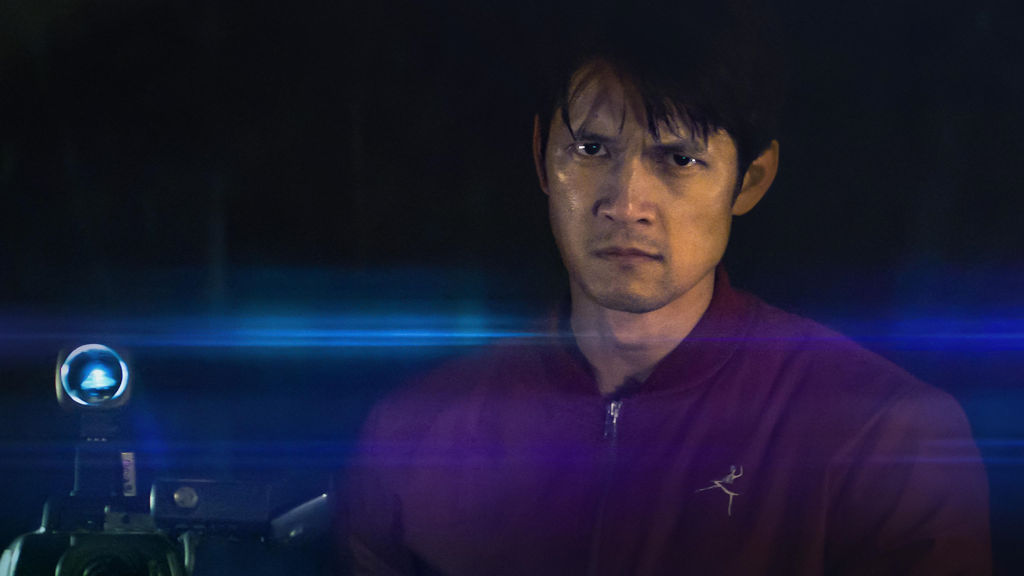 There is an enthralling line of dark-web, creepypasta intrigue running through Jacob Gentry’s Broadcast Signal Intrusion. which starts his sleek conspiracy thriller off on some strong footing. Set in the late ’90s, when the broadcast airwaves were unruly and full of potential terror, the film sees hapless video archivist James (Harry Shum Jr.) accidentally intercept a “pirate broadcast” of a haunting, mannequin-like woman babbling incoherently under heavy modulation and sending chills down the spine of anyone unfortunate to watch it.

What starts as curiosity over its mysterious origins soon balloons into an all-out obsession for the determined James who becomes obsessed with finding out who hacked the broadcast, how it connects to a series of missing persons, and what the coded messages hidden in the video ultimately mean. Starting down the path of technohorror, Broadcast Signal Intrusion takes a sudden turn into conspiracy-thriller territory, and the momentum injected into its premise slowly but surely evaporates.

Gentry’s film starts with this loaded premise of lofty potential and, unfortunately, stumbles when it tries to solve its own convoluted conspiracy. Chasing the mysterious videos and their deep-web, terrifying aesthetics down the proverbial rabbithole leaves the film feeling like it failed to see the great thing that was sitting in front of them. The film takes its inspiration from real cases of unsolved broadcast hijacking, such as the infamous Max Headroom incident in Chicago and tries to meld the idea with the creepypasta ethos of those sinister videos permeating the dark corners of the web and then couch it in the media-centric mystery of Videodrome.

The film messily tries to make these separate ends meet in the descending narrative of James and his burgeoning obsession with the creepy broadcasts and the network of “signal pirates” apparently looking to prevent him from finding out, and the effect is rather disappointing. The film placates its expanding list of plot points by adding a needless sidekick for James (Kelley Mack), a network of shadowy figures masterminding these videos, and a traumatic backstory for James, but the purpose for these details feels missing from their implementation. Seeing the throughline from where his investigation started and where it winds up proves difficult, as Gentry and scriptwriters Phil Drinkwater and Tim Woodall lose sight of their own intriguing elements.

While Broadcast Signal Intrusion has atmosphere to spare in its terror-inducing videos and its cold, sinister palette that’s rife with subterfuge, the film is more invested in trying to make sense of its tangled plot than do much with its look and mood.

The initial intrigue over James’ search wanes as Gentry overstuffs his film with exposition that does more harm than good to the film’s overall effect. Part of what makes signal intrusions like the Max Headroom incident endure and fascinate still to this day is their inherent unknowability and forcing us to view a technology we are all generally comfortable with from a new, sinister perspective, and Broadcast Signal Intrusion does not seem to understand that. It takes that initial goodwill toward its premise and clouds its horror with unnecessary detail that confuses rather than explains.

While Harry Shum Jr. and his quiet, charismatic obsession make for a suitable anchor down this rabbithole of a film, the film never reaches its true potential. The chilling atmosphere and haunting premise is squandered on a rather standard conspiracy thriller that only rarely feels coherent.

Broadcast Signal Intrusion can best be described as a season of the cult television series Channel Zero truncated into an hour and a half, and for many, that is worth checking out to at least scratch that creepypasta itch. But, in effect, the film is lopsided and cannot sustain the initial interest promised in the premise. There is a good film here, but like most broadcast signal intrusions, it is covered in the haze of static and white noise.

Click here to check out all of our SXSW 2021 coverage!