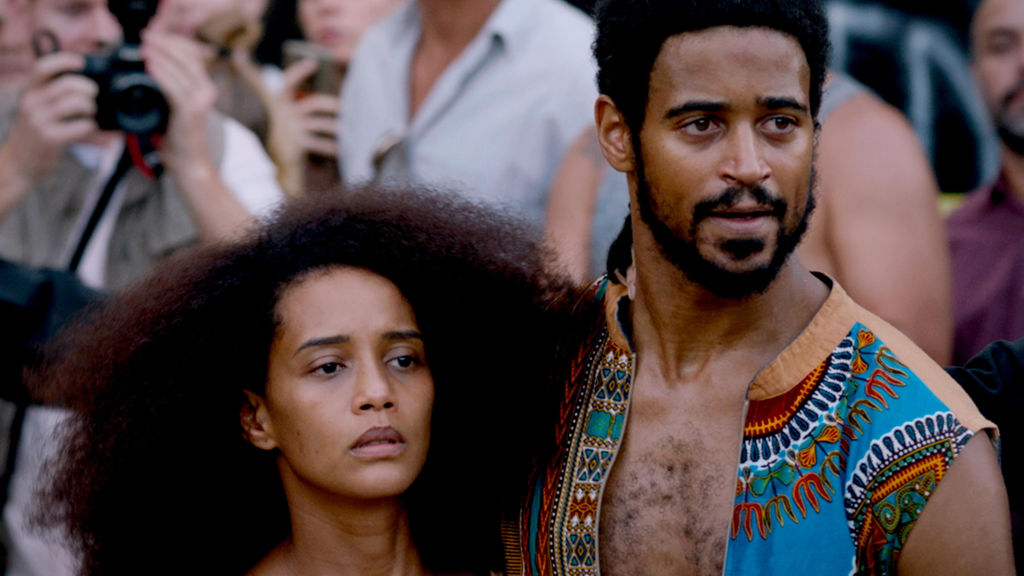 Sometimes nuance and subtext are the strongest methods in reaching an audience, allowing them to organically discover the meaning behind specific themes and attributes of a film. Other times, using a proverbial sledgehammer to bash the viewer over the dome is the best way to get the point across, and that’s exactly what Lázaro Ramos does in his sci-fi-adjacent title Executive Order.

Set in the not-too-distant future, the film centers on a series of events before and after the Brazillian government undergoes a series of radical changes in which the government rolls back its more progressive equality standards and attempts to nudge “melanized” citizens to move to Africa. This “incentive” obviously rubs Braziliansof color the wrong way and, although some go for the plan, most protest this oppressive and overtly racist program.

Very quickly, however, after only a meager number of people agree  to leave voluntarily, the government unsurprisingly enacts a law that forces any darker skinned individual to leave the country. This transforms Brazil into a dystopian warzone overnight, erupting the cities and favelas into turmoil and violence.

Alfred Enoch and Taís Araújo star as Antonio and Capitu, an upper-class couple living in Rio de Janeiro. Antonio works as a lawyer fighting for reparations for the descendents of former slaves, and Capitu works as a doctor. They live in a comfortable gated apartment building, which ends up shielding Antonio and his cousin, Andre (Seu Jorge) after the hammer falls. Capitu, sadly, is not as lucky and must escape from her work building during the roundups. She ends up in the hideout of a group of people who found shelter from the police.

Reminiscent of last year’s incredible Bacurau, Ramos’s film injects dark satire into a fictional event that these days seems devastatingly more possible than ever before, in my lifetime at least.  Unfortunately, the glaring logic problems with Executive Order cannot be ignored. It’s a film that clearly doesn’t want you to think about how all this would work on a political or economical level. Like, all these African countries are just cool with taking in potentially millions of displaced Brazillians? This disregard for showing how the moving parts or end result of all this would play out, coupled with the overt themes of systemic racism, yield a  fascinating yet entirely too surface level to feel like it’s really trying to say anything profound.

The bulk of the run time is spent with Antonio and Andre stuck in their apartment and Capitu trying to keep herself and the people she’s hiding with calm and sane. This causes the pacing to lose a significant amount of steam, leading to a few more plot reveals that ultimately add little to the overall narrative.

Executive Order is a film that contains some good ideas, solid performances and some entertaining moments, but the disjointed nature of the script causes the overall experience to feel lacking, especially coming so soon after a film like Bacurau handled similar subject matter in a similar fashion but in a far more substantial manner.