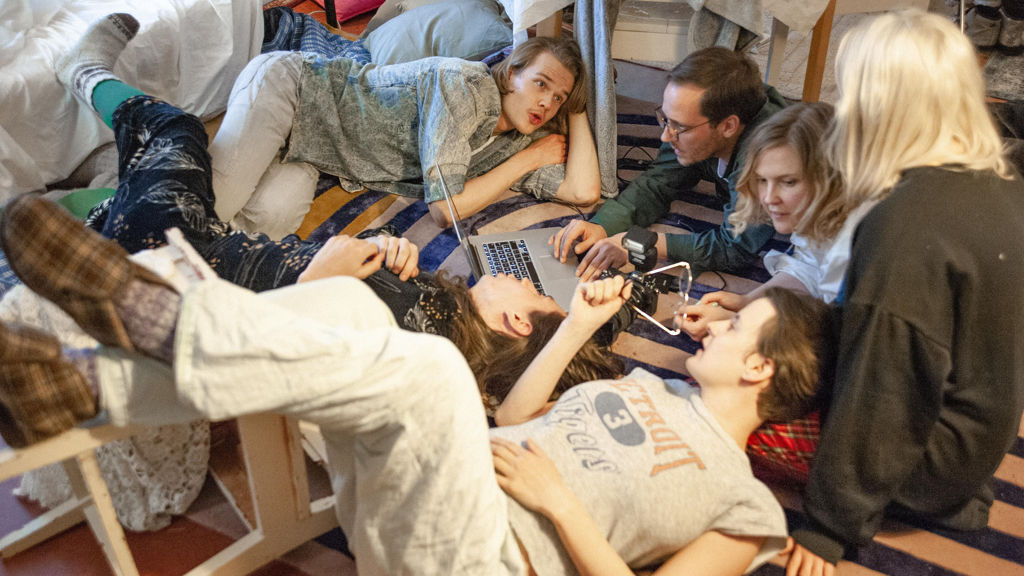 The intimacy of the “influencer relationship” has always been suspect. How does one sift through the disingenuity of the online space to find any real affection when there are Instagram power couples who spend more time orchestrating their romantic selfies and composing their ‘relatable,’ trendy captions than they probably do together?

Hauru stars as commercial film director Hana, a discontented creative floundering in her own male-dominated industry. Having lost out on a lucrative job directing a vampire film to her professional rival, Kristian, and his star romantic partner, Shirley, she drowns her sorrows with her sister and her cabal of bohemian academics who spend their time philosophizing on the dynamism of sex, the fragility of ego, the fluditiy of gender roles, and how easily these things can be staged when pushed into the content-obsessed world of social media.

Seeing an opportunity for a multimedia project in their extended bull session about Instagram and romance, Hana concocts a fake relationship between herself and crew member Ekku and builds it entirely in the online space. What begins as a riff on how easily intimacy can be faked for a follower count slowly snowballs into a blending of fantasy and reality as Ekku, Hana and the crew lose sight of the initial thesis of their project and become lost in their facade.

The film rides this developing concept with equal parts absurd irreverence and salient insight as it shifts constantly between the layers of its artifice to great comedic effect, commenting heavily on keeping up appearances on social media, objectification, conventional gender roles, and the film industry while it bleeds between its own production and the romance that they are playing up on social media.

The film carries itself with a pithy cynicism and a wry sense of observational comedy as it skewers its chosen targets with its inventive charms and layers upon layers of hypnotic artifice. Falling down the rabbithole of Hauru’s faked romantic meta-comedy, Fucking with Nobody scratches at plenty of uncomfortable truths regarding our social mediasphere and probes it with cheeky precision.

Besides its sharp satire, Fucking with Nobody equally feels like a treatise on eroticism and intimacy in between its many belly laughs. Visually sumptuous when it prys itself away from the lens of a phone camera, this film is haptically affecting in its intimacy (staged for an Instagram post or otherwise) as Hana, Ekku and anybody else become caught up in their falsified romance. It’s the type of film that is waiting to be cracked open by a feminist-media scholar and have its themes laid bare for all intrigued by it.

It’s a heady, inventive film that rewards viewers as we ride through its bizarre rhythms and see the heart of its irreverent satire. While the frankness in its observations regarding social media and love may play redundant to some, Fucking with Nobody mines enough incendiary comedy from the premise to be well worth hopping through its multiple layers of artifice.