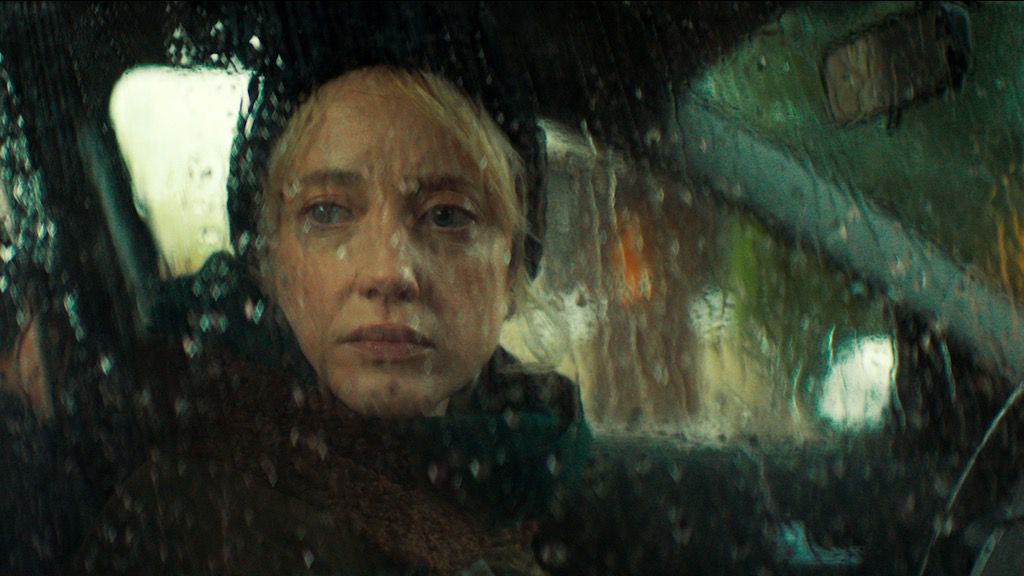 If anything, the taut psychological thriller Here Before serves as yet another feather in the cap of Andrea Riseborough and her ability to elevate most anything with her presence alone. Playing a grieving mother teetering on the precipice of madness when her perceptions of reality and memory are challenged, Stacey Gregg’s solid, if uneven, thriller is supported on the back of Riseborough’s devastating and nuanced performance as Laura. Displaying such a racked and palpable range of emotions as her sensibilities and certainties gradually erode over the tightly compacted runtime, Riseborough’s performance in Here Before becomes much of the reason to seek out what is ostensibly a muted and slim thriller.

Gregg’s film follows Laura arriving in a new suburban inlet in Northern Ireland hoping to get a fresh start on things after a recent tragedy. As hopeful as she and her husband Brendan (Jonjo O’Neil) are for the change of scenery, tensions and uncertainties begin arising when Laura starts getting uncomfortably close with precocious grade-schooler Megan (Niamh Dornan), the daughter of their new neighbors.

Coyly, Megan  begins acting overly familiar with Laura, referring to things the pair have done in the past, dropping suspicious anecdotes, and attempting to spend as much time as possible with Laura. Unnerved by Megan’s actions, Laura’s burgeoning obsession to uncover how she knows such intimate details and why she is acting the way she does sends her down a path of twists and turns that, again, are mostly useful to highlight Riseborough’s talents as an actress.

Gregg’s film is decidedly minimalist and operates under scant detail, placing much of its stock into the slow, sinister atmosphere it builds around Riseborough’s character. The plot itself is fairly straightforward and is only granted an eerie effect due to her unembellished style and willingness to let her film come to rest on its own creepy implications. While at times her visual style can be striking with the deliberately muted cinematography and moody palette giving a sense of gravitas to suburban mundanity, but more often than not the film rings hollow in its presentation.

The surprising revelations over its central doubt plaguing Laura perk the film up in its final act, Here Before is stuck in a state of being inert for the majority of its brief, succinct runtime. Gregg makes efforts to experiment with her visual style by offering oblique, unnerving sequences and experimenting with nonlinearity to break up the overwhelming monotony of her vision, but these sequences feel misplaced and speak more to a debuting director trying things out than actually gelling with the film’s overarching sensibility. Here Before is banking on its audience’s patience and for its ultimate payoff to justify the slow digression, and I am not entirely sure its reveal will satisfy as much as Gregg hopes.

Regardless, for better or worse, Here Before is kept afloat by Riseborough’s strong, centering performance and the film’s commitment to its restrained visual style. Gregg shows a lot of promise in her control over the film’s elements and for the way she can approach its central concept and wring so much tension and intrigue from it. While we might not all be interested in yet another minimalist thriller about grief, Here Before has enough going for it to stick out in the crowd of similarly styled films.