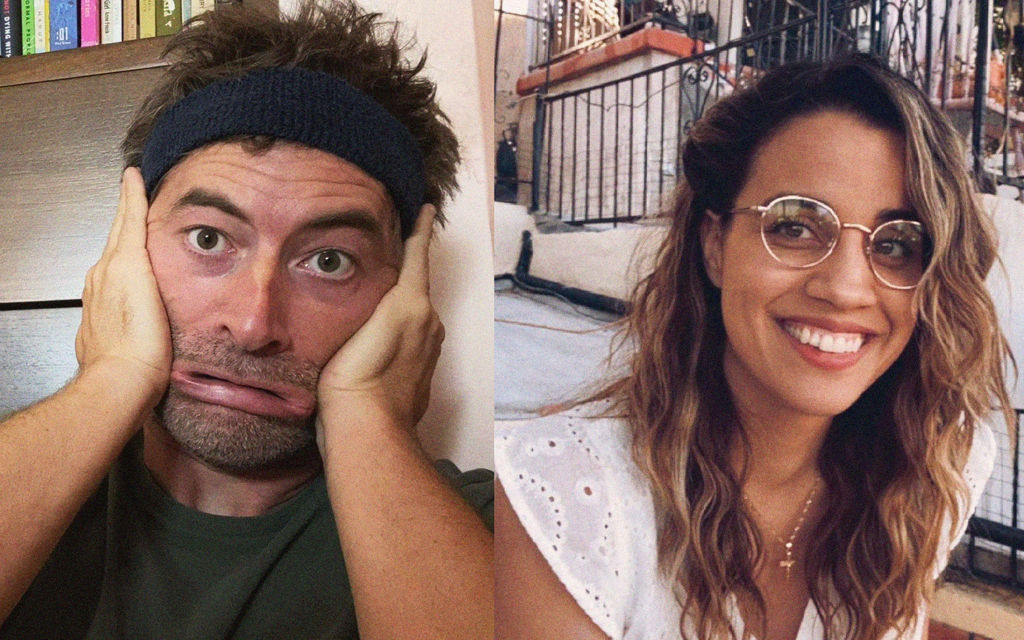 After spending a year squandering our time in our homes in a perpetual state of unease and stagnation under quarantine lockdown, you’d imagine that a film structured exclusively with Zoom conversations would be the least appealing proposition. While we can appreciate the ingenuity on display, which sees filmmakers cleverly working under and circumventing the restrictions of COVID safety protocols, the ‘quarantine film’ will forever be a hard sell for it hitting a little too close to home and its complete lacking sense of escapism from our unignorable present.

Whether or not we think we do not want to watch something so “real” as to remind us of our unfortunate, day-to-day monotony, occasionally some form of pandemic filmmaking can break through our defenses and charm us with its clever framing of quarantine life and its inspired workaround of household lockdown. This is a rather long lede-in to say Natalie Morales’ Language Lessons is such a quarantine film, one that is so fresh and endearing that I can imagine it staying relevant long past the conditions of the year in which it was produced.

The premise, like most quarantine films, is fairly straightforward. The affluent Adam (Mark Duplass) is gifted some Spanish-language-immersion lessons by his husband, Will (Desean Terry), to reclaim his severely atrophied language skills he once had in childhood. The film is completely composed of correspondence between Adam and his Spanish instructor, Cariño (Natalie Morales), either through scheduled Zoom conversations or video messages bounced between the two, as they gradually come to know one another in their evolving student-teacher dynamic. After a sudden tragedy upsets this solid dynamic and threatens their burgeoning friendship with a sudden dose of intimacy and dependency, the film explores the notion of boundaries in a world where online relationships are the new norm and how we navigate closeness over Zoom.

The film begins with Cariño and Adam testing the waters of their sudden relationship in what has the makings of an awkward meet-cute comedy. Duplass’ understated charms as the sappy everyman hoping to find any levity to their conversations are allowed to shine bright, playing off Morales’ tender but stern instructor role. The two share a palpable, touching chemistry despite the persistent intermediary of the Zoom call as they define and work through the boundaries of their budding friendship through cloying ice-breaking jokes and less-than-stellar sSpanish skills from Duplass. From the onset, Language Lessons has the makings of a light, airy comedy about the pitfalls and challenges of online camaraderie, but through Morales and Duplass’ collaborated script, their film blindsides you with emotional gutchecks.

This occurs not only in the form of the inciting tragic incident, which turns their teacher-student relationship on its head by the second lesson, but through the pair’s consistent testing of the waters through pointed, frank Zoom calls that can flip its tone from jovial to terse suddenly. Duplass and Morales, as the only onscreen presence in the entirety of the film, carry these moving, emotional speedbumps with self-assurance and an enrapturing rapport.

Morales’ direction and staging choices are limited, due to the restrictions of the chosen interface, but the film has a surprising variety of sets given the whole film is from the perspective of a webcam. She makes economic use of Adam’s gaudy mansion and Cariños Costa Rican townhouse, giving the film opportunity to utilize its limited scope and offer a poignant contrast between the two characters and the difficulty in them finding themselves on the same page. From personal viewing experience, Language Lessons is likely one of the few quarantine films that can say it conquered the limits of its stay-at-home premise and built a sprawling interiority based on the strength of its cast.

We may not be fully ready to accept quarantine films as the subgenre it has become over the past year, but thanks to films like Language Lessons, we can see that the Zoom call structure has potential for honest, effective drama and comedy, even when restricted to a desktop.