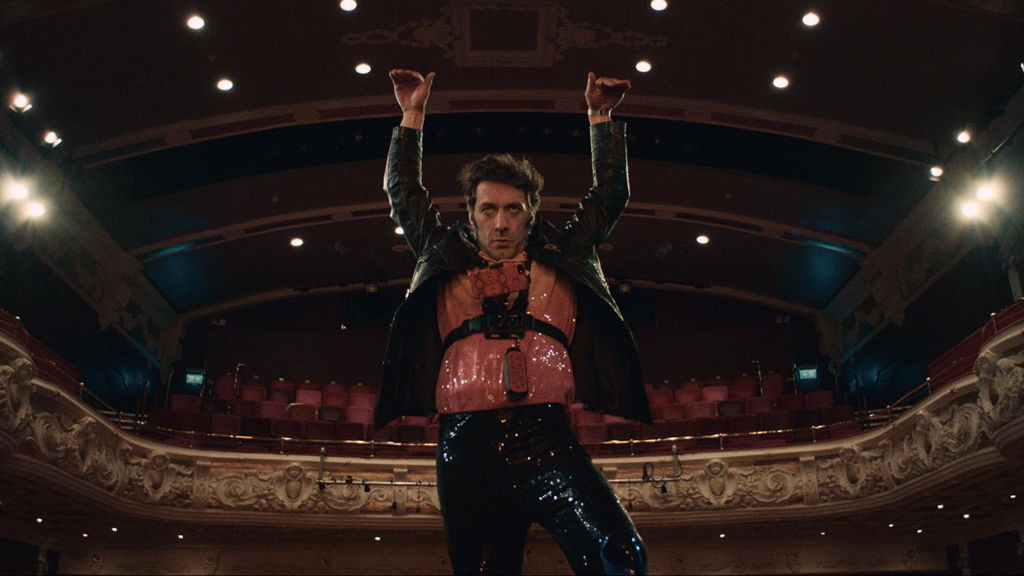 Nick Gillespie’s ultra-violent satire is like if Joel Schumacher’s controversial Falling Down was updated for the generation that was raised on British talent shows like X-Factor and Britain’s Got Talent. Centering on one eccentric idealist who is pushed over the proverbial edge by his pursuit of stardom, Paul Dood’s Deadly Lunch Break is a gory comedy of errors wherein the titular Paul Dood bumbles his way through a hapless rampage, taking comedic revenge on all who rudely stood in his way of achieving his lifelong dream of fame and fortune. Unlike most revenge-centric films, the darkly comedic overtones of Paul Dood stop the audience from reckoning with the sudden, shocking flurries of violence and gore on display, and this fundamental tonal imbalance weighs heavily on Gillespie’s film.

Paul Dood himself (as played with magnificent range by Tom Meeten) is inherently a sympathetic figure. A middle-aged social-media clout chaser who considers himself a classic “entertainer,” Paul is encouraged by his loving mother (June Watson) to endlessly pursue his far-fetched dreams of superstardom.

A regular streamer on the “Trend Ladder” social media platform, which is similar to Facebook or Instagram live but with an incorporated ranking board, he practices his awkward song-and-dance routines to an audience of nobody but cherishes every slight interaction he can get. Paul stakes his hopes of instant-celebrity on a talent show associated with Trend Ladder, which is hosted by a Ryan Seacrest-like figure named Jack Tap (Kevin Bishop) whose dialogue mostly consists of clichéd, conceited and vain statements.

However, Paul’s journey to superstardom is stymied by a series of unreasonably uncooperative and increasingly bizarre strangers who delay his audition and supposedly cost him his one and only chance at fame. Snapping irrevocably, Paul Dood resolves to have his revenge and stream it all online during one excessively bloody lunch break, picking off those rude individuals who wronged him one by one in a series of horrifically violent mishaps. The shift from wry, awkward cringe-comedy to sudden horror-comedy as Dood’s nemeses are dispatched within creatively gruesome ways is unsettling to say the least.

Outside of the usually clever dialogue exchanged between the well rounded and memorable characters, most of the comedy in Paul Dood is predicated on unanticipated, excessive gore, and the meshing of tones does not always work in the filmmakers favor. Paul himself remains a likeable anchor to the film due to his Mr. Bean-esque bumbling and Meeten’s charming presence, but the callousness with which the film tries to mix in these elements of violence don’t always work. The sudden bursts of gore are creative and silly for the most part (a memorable scene involving a steamroller and a corrupt priest can attest to that), but the film frequently feels like it has the single punchline of abrupt smatterings of viscera, making Dood’s rampage feel repetitive.

Outside of the physical comedy, Paul Dood tends to go too broad with what it is attempting to skewer, much to the film’s detriment. While the predatory aspects of social media are placed firmly in its sights, resting on the margins of its satire are half-baked shots at the culture of circadian live-streaming, celebrity worship and the culture of feigned British manners.

By the climax of the film, when his rampage has run its course and a string of bodies lays in his blundering wake, the film struggles to say much about the targets it has been skewering. Much like the audience, it is much more comfortable watching Paul Dood “get us in the mood” with his charm and humor instead of arriving at a salient point, and if the film that housed him wasn’t so determined to foreground a message in the first half, the experience would have been much more enjoyable.

Yet Paul Dood is an odd comedy that is original enough to keep one invested through its titular character’s violent escapades. Unlike Falling Down, it can find the humor in this eccentric’s impotent rage and indignation and mine it for some decent jokes or at least jokes that aren’t so often repeated. There is a detectable kernel of sincerity within Paul Dood’s ultraviolent posturing, and if you can see through its missteps, there is a lot of black comedy fun to be had.