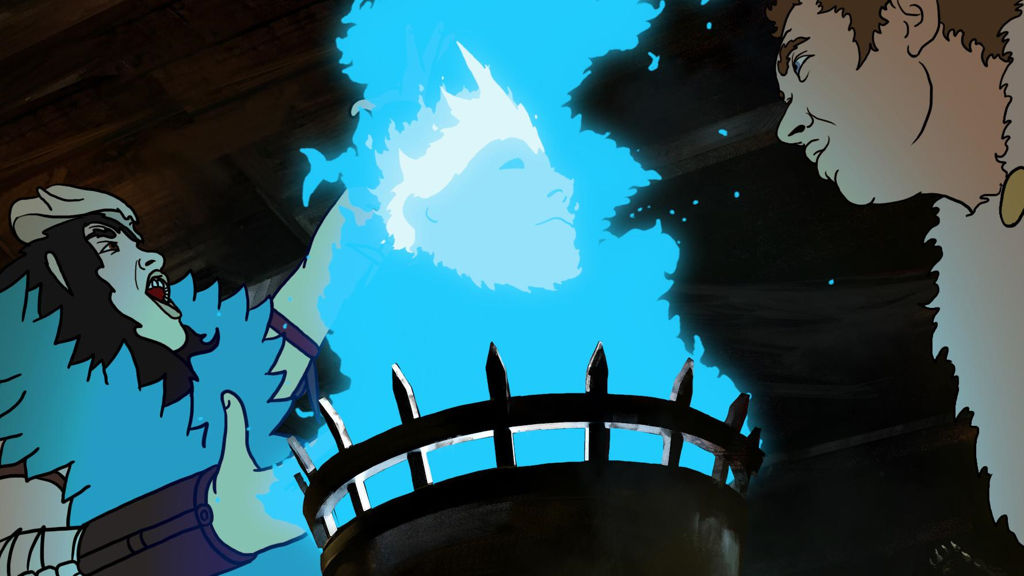 The Spine of Night is the type of film that proudly wears its obvious inspirations on its sleeve and plays out like a pastiche for an audience that is very much in the know for what it is going for. Philip Gelatt and Morgan Galen King’s independent animated fantasy, built initially off the back of – and substantially expanded from – King’s previously produced short, Exordium, is a lush amalgamation of elements undoubtedly pulled from the directors’ shared enthusiasm for dark fantasy and gritty, adult animation.

Meticulously rotoscoped in clear homage to the dour fantasy films of Ralph Bakshi; bloody, visceral and bleak, recalling the grimdark worldscapes of Richard K. Morgan, touting a willingness to toe the line of good taste a la the edgy vision of Heavy Metal magazine, The Spine of Night contains palpable, endearing enthusiasm behind its striking imagination and uniquely off-putting visual design that all but guarantees it a place on the midnight-movie docket for years to come.

Like most dark-fantasy epics that seek to immerse you into a fully realized world of mysticism and legend, it takes some time getting onto its wavelength, and Spine of Night does not exactly offer a hand to ease you into it. The film concerns the century-spanning malevolent influence of an all-powerful substance, known only as “the Bloom,” a potentially cosmic fauna that has the power to unlock unfathomable, godlike power.

Watched over by an Ancient Guardian (Richard Grant), the last of the plant is sought by Tzod (Lucy Lawless), a swamp witch who once wielded its power and wishes to take up the mantle of protecting it for future generations. Together, they share a hyper-violent tale about the tragedies and heinous acts of war and greed influenced by the Bloom, weaving a grandiose tapestry of savagery and tyranny spanning centuries.

Plotwise, The Spine of Night is decidedly rough around the edges. The framing device of Tzod and The Guardian works well enough, as does the first “segment,” featuring Tzod being captured by a vindictive Lord Pyrantin (Patton Oswalt) and partnering with “Ashur” scholar Ghal-sur (Jordan Douglas Smith), who soon becomes possessed by the powers of the Bloom in the scripts first of many displays of cruelty. As Tzod and the Guardian continue their rolling chronicle, however, and the narrative changes hands multiple times to lesser defined protagonists in the film’s almost anthology presentation, the narrative arc becomes decidedly less defined and engaging.

The Spine of Night introduces an engaging sense of lore, but the more it tries to define and explain itself, the more convoluted and unclear its mythology seems in the grander scheme. Yet, this is a recurrent pitfall within the fantasy genre and for its brief runtime, Gelatt and King do what they can to establish a sprawling fantastical world that, ultimately, serves to elevate the film’s best quality: its animation. The rotoscoping and character design come across as stunning, especially when their bright-colored models and tremulous motion clash with the luscious, detail-heavy painted backgrounds.

But where The Spine of Nigh truly comes into its own is when it gives into its violent impulses and indulges in stylistic ultraviolence. The frequent scenes of visceral gore fix well into Gelatt and King’s cruel vision and are some of the most paradoxically appealing e in the entire film. The scenes of unbridled, vicious, medieval combat that punctuate the film both provide an affective spectacle and textured feel to their ferocious worldscape.
The Spine of Night is a film of such clear appeal that its audience is already assured. Bloody, adult-centric animation that takes both its audience and its sweeping fantasy world with the utmost sincerity and can deliver you into its brutal worldview is an achievement we should be championing whenever it works out – as it certainly does here.