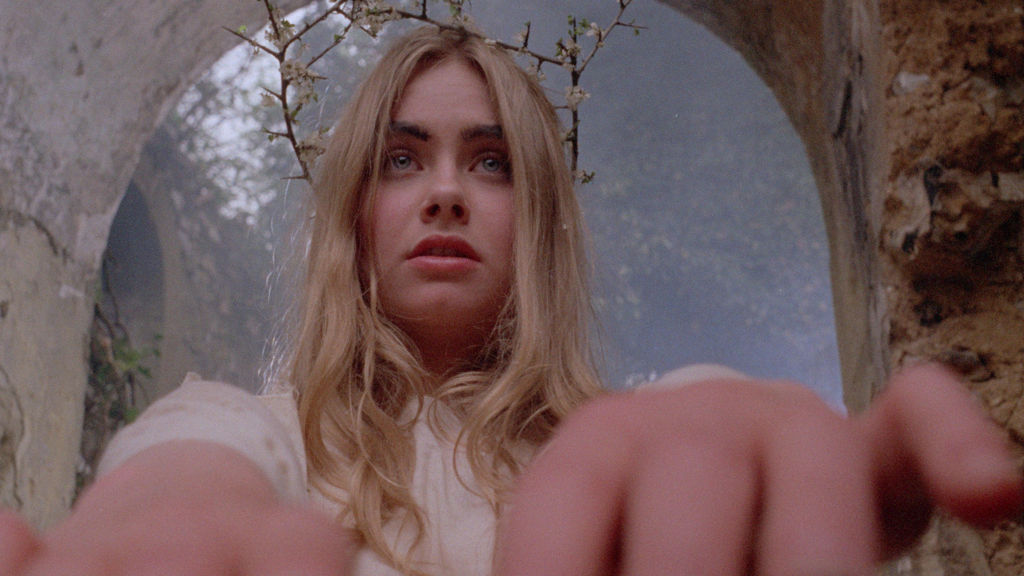 A recent trend in the realm of horror documentaries has seen directors preferring to “go long” on their subjects, resulting in extended, daunting runtimes. Recent examples, such as Never Sleep Again: The Elm Street Legacy (3 hours, 59 mins.), In Search of Darkness (4 hours, 24 mins.), and the mammoth Crystal Lake Memories: The Complete History of Friday the 13th (6 hours, 40 mins.) have come to realize that the horror community wants their fandom indulged to the nth degree and value thorough, deep and excessive detail in the films that speak to their interests. Luckily for them (and anybody with a passing interest in genre study), the definitive documentary on the loosely defined subgenre of folk-horror has arrived and is ready to scratch that pastoral horror itch you harbor.

Kier-La Janisse’s Woodlands Dark and Days Bewitched is like a doctoral thesis on the genre that effectively leaves no moss-covered stone unturned as it lays out the rich, complicated history of the oft-misunderstood genre to educational and entertaining effects. Charting the genre’s history in informed, academic terms, the film delights in overwhelming you with film titles and experts prepared to give you an all-encompassing crash course in horror history.

Starting from the retroactive coining of the term and the christening of the genre with films like Witchfinder General, The Blood on Satan’s Claw and The Wicker Man, the film casts a wide net in its subsequent chapters. Moving from the enduring influence the genre’s signifiers had on British horror from the ’60s to the present, the film proceeds to probe the pagan and witchcraft elements of folk-horror, before crossing the pond to place the spotlight on American folk horror, and then looking at the genre globally.

In between these heavily detailed and enjoyably informative segments of the standardized film-clip, talking-head format, Woodlands indulges in a multimedia angle through beautifully animated paper-collage segments produced by Guy Maddin that play over poetry and folk songs. The effect is sumptuous and wisely implemented to break up the dryness of what is a daunting three-hour cinema and media-studies lecture. The information, of course, is utterly fascinating, and the experts – ranging from academics, historians, directors, critics and anybody who was there back when folk-horror first blew up –  ensure no angle is left unexplored.

The prospect might seem intimidating to many who may not be too invested in the genre of folk-horror to begin with. That is the beauty of Woodlands and director Janisse’s clear enthusiasm and admiration for her subject matter. In combing through the history of a genre with such a fine-tooth comb, it is hard not to wind up respecting the impressive undertaking and appreciating the filmmakers’ and interviewees’ love of this under-discussed genre.

It is one of those rare documentaries that convinces you that its broad, thorough format is utterly necessary. Or at the very least it will convince you to seek out some folk-horror titles that you may have never known existed without the point in the right direction through the abundant catalog of titles it mentions and breaks down.

Impeccably researched to a fault and with more detail than you may know what to do with after it is over, Woodlands ensures that no other film on the subject matter actually needs to be produced. What is left to say in the wake of Woodlands? What ground is left to cover that these three hours did not inevitably get in all its scholarly excess? For horror and genre films alike, Woodlands is a definitive work that must be sought out and marveled over.