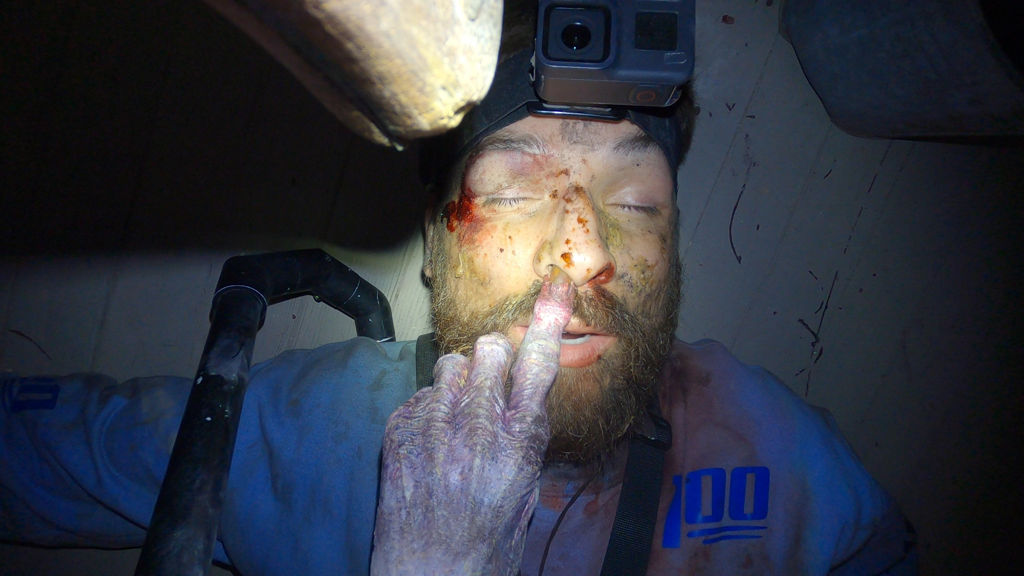 How many misty-eyed, insincere apology videos from famous YouTubers who attempt to assure us they “never intended to offend anyone” with their latest headline grabbing video controversies must we sit through (sometime multiple apologies from the same influencer) before we start wondering what it would take to really teach them a lesson for their outrageous behavior? That’s the inquiry that lays at the heart of writing-directing duo Joseph and Vanessa Winter’s Deadstream, a farcical sendup lampooning of the YouTube/Twitch online personality and the lack of accountability surrounding the attempts some make to go viral.

Deadstream centers around a disgraced livestreamer, Shawn Ruddy (Joseph Winter), whose latest in a long series of online controversies cost him everything he loves (i.e., his monetization, his viewer count and his corporate sponsors). Drug through the aesthetics of found-footage horror and Twitch livestreaming, the Winters’ overt satire orbiting the utter lack of empathy the career seems to breed is laser focused with its message, at the occasional expense of both its potential for laughs and horror.

A spiritual and ideological amalgamation of what makes the likes of David Dobrik, Logan Paul and JayStation (if you don’t recognize these names, I envy you) detestable to anyone but their core fanbases, Shawn hosts a channel hilariously entitled “Wrath of Shawn,” where he performs outrageous and contentious stunts as the platform universally rewards shocking content with clicks and engagement. He’s the type of content creator to perform the “run from the cops” challenge or the “smuggled across the border” challenge if you know that corner of YouTube.

As parodies go, the film is pinpoint with the utterly believable Shawn, nailing the obvious friendly facade of the soulless content creator and parasitic overtones to his engagement with his following with biting precision. For his part, Winter’s performance is pitch perfect in how it skewers the onscreen persona of many famous YouTubers who project kid-friendly pleasantness in front of thinly veiled heartlessness and hyperfixation on content and view counts. He’s the type to stop in the midst of what he believes to be a genuine haunting in order to shout out his sponsor and request that you “smash the like button.”

After his latest stunt backfires, he attempts to win his fanbase back with a livestream challenge, where he will spend the night in “Death Manor,” the most haunted house in all of the nation, according to his tertiary skimming of Wikipedia. Utilizing a network of cameras set up around the manor, as well as multiple body cameras, Deadstream melds the uncomfortable intimacies of the found-footage mechanic with the Twitch livestream experience to great effect so that it is never clear what is overwhelming the audience: the kinetic, unrefined cinematography or the bloated ego of the streamer constantly arguing with the chat and overreacting for the sake of his views.

The properties of found-footage are frequently used to great effect by the Wintersand are often given an extra enjoyable layer of gimmick due to the premise as a livestream satire. There’s a memorable sequence wherein Shawn checks his own livestream for ghostly apparitions he can’t see; his interaction with his chat solves the logical problem of why so many people in found-footage horror films feel the need to constantly talk to themselves; and the usually revealing layer of closeness that comes when the main character is also the cameraman is stymied by Shawn’s attempts to maintain his YouTuber persona.

From this point, the film follows a familiar path for the found-footage mechanic that is centered around media production or YouTube (i.e., Grave Encounters or Gonjiam: Haunted Asylum), in which the amateur self-documentarians wind up disturbing the malevolent force with their repellant presence and the rest of the film is torn between the impulse to survive and the impulse to get good footage. Where Deadstream departs from this mold slightly is the liberal inspiration it takes from the slapstick-heavy horror comedies of Sam Raimi, as its third act devolves into bloody clownishness and broad physical comedy.

The copious gore effects are noticeably rough around the edges and Winter’s performance is left with little place to go, and the messy crescendo in the third act winds up diluting much of the foundational satire’s impact. The excessive lowbrow, splatter-comedy touches feel incongruous with the film’s pointed takedown of YouTuber culture, and the attempts to connect this theme back to the exaggerated register (like Shawn at one point attempting to understand his poltergeist as “an influencer, just like me”) fall flat awaiting a bloated and misfired conclusion.

The Winters’ feature debut is an ambitious entry into the found-footage style that falters slightly under the weight of its excesses. Maybe in sending up the larger-than-life insufferability of the controversial YouTuber, they felt the only path was a go-big-or-go-home approach in tone and horror. Yet, when the target of your parody is rendered so unbelievably familiar and carefully constructed in his excesses, Deadstream errs in its attempts to match it with its own.