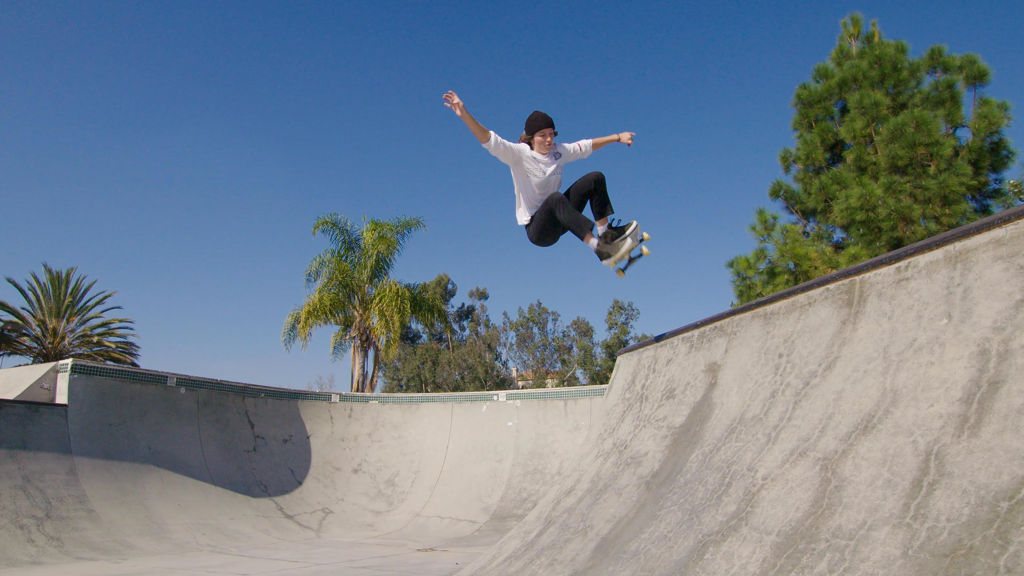 The world of professional skateboarding during its ascendance into mainstream popularity inarguably has the aura of an insulated “boys club,” born out of and maintained within California. For those not entrenched in the skating community, the likelihood of their familiarity with any non-male pro skaters would be dependent on whether or not they took up a roster spot in one of the dozens of Tony Hawk video games.

With the inclusion of professional skateboarding as part of the Tokyo 2020 Olympics as the first truly international stage for the extreme sport and its highest point of cultural exposure, it only makes sense that a correcting of the record regarding the ongoing discrepancy of women’s representation within said sport was well overdue.

Director Jessica Edwards Skate Dreams is, per the film’s proclamation, the very first feature-length documentary about the women’s skateboarding community and aims to be a comprehensive account of how it has grown exponentially within the past couple of decades through the efforts of key community members and the invaluable tools of social media.

Structuring itself around profiles of several key figures within women’s skateboarding and then creating a web of contacts and influences around them to demonstrate how organically the sport took hold, the film’s insightful narrativization works overtime to dismantle any lingering stigmas around gender and extreme sports while wisely constructing a legible timeline.

Casting the Women’s Skateboarding event at the Tokyo Olympics as the culmination of years of exposure the profiled members of the community have been working toward, Edwards provides a truncated and vivid throughline while never losing sight of how much work still needs to be done. Taking the likes of famous skateboarders Mimi Knoop, Cara-beth Burnside, Nicole Hause and Nora Vasconcellos as some of the anchoring subjects, the film’s intersecting profiles of these women and how they came to meet one another give a forceful impression of how a marginalized community tends to expand naturally around its members.

While the film begins with Knoop and her professional career in the early 2000s, the gradual way Edwards introduces the other subjects branching off from Knoop, first as side characters in the subject’s orbit and then fully immersed in the camera’s focus, ensures the film remains lively and engaging as it charts the sport’s shifting demographics. The curation is particularly well done, and for their part, the selected subjects are informative. Through the co-operation of archivist Lisa Whitaker (who essentially was the only journalist documenting the female skateboarding world in its infancy), Skate Dreams is also spoiled with footage of its many skating participants.

Wisely, the California-centric and predominately white story of women’s skateboarding is broken up by smaller narratives featuring skaters of color (such as Cambodian-born skate instructor “Tin” Kouv Chansangva and Hawaiian-born Jaime Reyes) whose inclusion broadens the film’s admittingly narrow scope. Their heartfelt testimony to the sense of empowerment and identity they received from skateboarding and how they are working to spread that experience prove to be some of the most moving and affecting moments in Edward’s already suitably inspiring film.

It must be stated that Skate Dreams fundamentally misses the opportunity to highlight any of the growing queer and trans sectors of skateboarding (especially with the inclusion of organizations like Skate Like a Girl that fund programs for said sectors), but that subject feels large enough for its own film.

While historiography is what the film’s main point of entry is, where it also shines is its framing as the growing influence of social media as pivotal to growing the women’s skateboarding community. Commenting incisively on how they act as tools to dismantle the institutions of men’s skateboarding and take the power away from skateboarding companies and in the hands of the users, Edward’s film is comprehensive on this particular angle, going as far as to delightfully incorporate an Instagram post aesthetic for much of the superfluous skate footage, filling out the film (complete with social media handles of the skaters) to firmly get across how vital the platforms were. The same can’t be said for the film’s coda, featuring an undercooked observation on how the COVID lockdown assisted in the growth of skateboarding as a hobby, which can’t help but feel tacked on and unnecessary.

Through its sprawling portraits and its condensing/processing of history, Skate Dreams is an edifying documentary on the spectacular growth of the women’s skateboarding community and a sobering reminder on how much more ground that still needs to be covered. Its organization of events, such as the early-2000s’ women’s boycott of the X-Games and the competition circuit surrounding the selection of the US Olympic skating team, provide as complete a picture as necessary as to the struggles and tribulations involved in expanding the demographics of the sport. As the self-proclaimed first and only film on women’s skateboarding, it (deservedly) achieves the status as the most comprehensive film on the subject thus far.