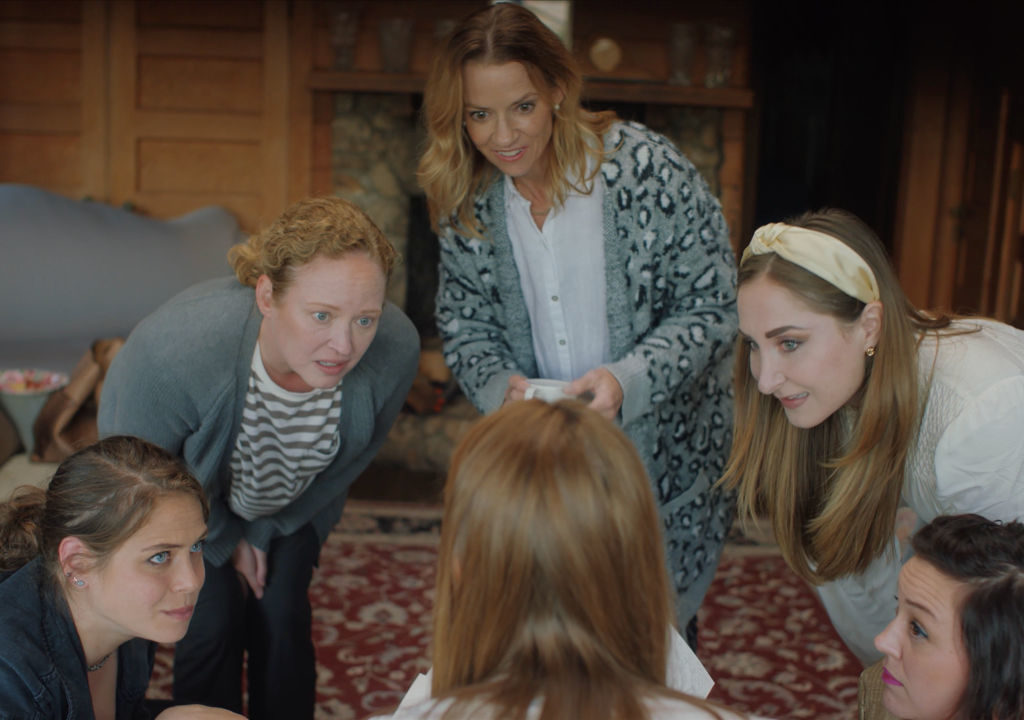 In a secluded room above a church, a group of posh and affluent white women sip tea and eat dessert while making polite conversation. Then, like a switch being flipped, casting all their pleasantries into a new light, school teacher Emily (Stefanie Estes) sternly addresses the group with a proclamation of sorts: “We must be SOFT on the outside, so our vigorous ideas can be digested more easily because we tread QUIETLY.” As the conversation progresses and becomes more focused on recruiting tactics and progressively racially insensitive, it is revealed to the audience that this is the first meeting of the “Daughters for Aryan Unity,” and their demeanor has been a deliberate camouflage for their true intentions.

If you have been keeping tabs on the ascendancy of the alt-right in the leadup to and the aftermath of the Trump presidency, you’ll know that the tactics of organized hate groups have become significantly awash in a veneer of hollow respectability. If you can recall those inexcusable “Dapper Young White Nationalists” profiles that appeared in reputable publications like Mother Jones a few years back, painting literal-card-carrying white supremacists in a prim and proper lighting, there seemed to be an alarming distinction being made within popular opinion between a “real” racist and someone on the alt-right, despite them sharing the same ideologies. In Beth de Araujo’s incendiary feature debut, she uncomfortably divines any supposed air of respectability is a thinly veiled pretense that hides the same hateful and ugly thoughts and actions as any garden variety skinhead who lives out in the open.

Soft & Quiet follows this nascent hate group in real time over the course of one disturbing day, as Araujo endeavors to capture the reality of its candor in grotesque and gruesome detail. The shock of her unflinching portrait remains consistent over the course of her film as her camera’s unbroken gaze denies the audience any form of reprieve from the violence of their rhetoric or the barbarity of their actions.

The meticulously choreographed and protracted shots ensure every action is captured, no matter how fundamentally horrifying — from a skin-crawling sequence, wherein the group violently intimidates two Asian-American women in a supermarket in broad daylight, to a more terrorizing and revolting scene of cruelty in the film’s third act after the sun has fully set. Formally the film uses its cinematography and editing to stunning effect and intimately places the audience in uncomfortable proximity with the darkest shades and deepest layers of humanity’s capacity for hate. Just as well, through the cast’s committed performances and the camera’s impartiality, Soft & Quiet never fatally wades into empathizing the monsters it documents.

However, Soft & Quiet is an extremely hard film to watch and one I am not entirely sure can be recommended. Holding an unflinching mirror to the unfiltered causticity of a hate group of white suburban women who become emboldened through their solidarity to drop the mask of decency and indulge in their hateful outlook in graphic detail, Araujo’s film crosses boundaries in a manner in which I am not entirely sure justifies the effort.

It’s a film that will unquestionably deserve all the trigger warnings assigned to it when properly released, yet the deliberate testing of personal limits toward the depiction of hate crimes risks becoming a cruelty in and of itself. Soft & Quiet’s calculated technique of escalation and pointed overwhelming walks a fine line between showing the actualities of racial trauma and inadvertently retraumatizing through its protracted extremities.

After sitting through the film one time (and likely the only time in my life), I remain unsure whether or not the whole exercise in extremity was necessary at the end of the day. How many unflinching mirrors do we need cinema to hold up to racism before we cross the line into exploitation?

Of course, as a white film critic who has never experienced a targeted racist attack in my life, the questions of whether Soft & Quiet is a necessary endeavor or if its brutal depictions of hate crimes are necessary or exploitative are not for me to determine. The film is effective in its goals to shock you with its blunt-yet-terrifying gut punches, and the discomfort it projects lingers well past the credits — a solid disturbing thriller that truly tests your limits as an audience member.

However in this present era of #StopAsianHate, where Asian individuals are becoming increasingly targeted with hate crimes, I could not imagine a film displaying the prolonged victimization of two Asian women as recommendable even beyond the filmmaker’s very obvious intentions. Where Soft & Quiet succeeds is at pulling back the veil of respectability that cloaks the alt-right movement, especially among its female contingencies, and being so bold in its depictions of the unfiltered realities of racism. Yet we must always remember such depictions and messages come with a cost that I, personally, am unequipped to calculate.