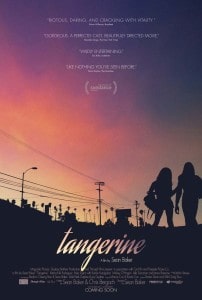 As a film critic, I often receive screeners in the mail from new or first-time directors who want me to review their movies, often with the request that I “go easy on them” because of their limited resources. From now on, I will simply refer them to Sean Baker’s Tangerine as an example of how a great film can be made without high-end cameras and experienced actors.

Tangerine was shot entirely using an iPhone, and holy shit does it look good. I was floored with the end result. Every color popped off the screen, and the exterior shots looked especially gorgeous, something I never expected coming from an iPhone.

This is something that should be looked at and studied by all indie filmmakers who are looking to make their first film but maybe don’t have the money to acquire a RED or an Alexa. Granted, the editing and color correction, which are both stellar, help things a great deal, but man, I seriously can’t stop gushing about what Sean Baker and Radium Cheung accomplished with this cinematography.

Tangerine is one of those films that gets so much right that, even during its low points, I feel the need to praise it. I recently saw this film on the rooftop of the John Jay College of Criminal Justice as part of this year’s Rooftop Films series in New York City, and as the sun began waning behind the surrounding skyscrapers, rapper Dai Burger performed, setting the tone for what would follow – a sassy, high-octane experience that is both edgy and fresh.

Tangerine is a kinetic journey into the lives of two transgender prostitutes in search of a pimp on Christmas Eve in Los Angeles. As early as 10 minutes into the film, I knew this was something special – an important film, both to filmmakers and the trans community as a whole, that unequivocally proves that one doesn’t need fancy cameras and highly paid actors to make something great.

Tangerine opens in a donut shop, where our two leads, Sin-Dee (Kitana Kiki Rodriguez) and Alexandra (Mya Taylor), are catching up after Sin-Dee is released from a short stint in jail. Eventually the conversation turns to Sin-Dee’s boyfriend and pimp, Chester (James Ransone), and Alexandra reveals that he’s been cheating on her with a “fish,” meaning a woman with a vagina. Sin-Dee utterly loses it and begins on a quest across town to find both Chester and the fish and confront them both.

The film’s rapid-fire editing and ever-present and transitioning soundtrack propel the narrative at a nearly breakneck pace as Sin-Dee hustles down the sun-bleached sidewalks of L.A., conversing with other prostitutes, drug addicts and various lowlifes along the way. It’s a sometimes-exhausting technique that fits the story perfectly, making us feel Sin-Dee’s urgency to find Chester and this woman.

While Sin-Dee and Alexandra search for Chester, the perspective periodically shifts to another character, Razmik (Karren Karagulian), a cab driver dealing with the various characters one would a imagine a cabbie might contend with on a daily basis.

This plotline feels disconnected at first, seemingly having little to do with the rest of the movie other than that he works in the same area, but they do converge, especially at the film’s climax, just not in an altogether satisfying way. I didn’t outright dislike Razmik’s story, but I found myself yearning to return to Sin-Dee and Alexandra every time it switched to him.

In addition to BEING SHOT ENTIRELY ON AN iPHONE this is one of the few films to feature transgender leads, something that’s incredibly important but rarely addressed in today’s social climate.

Tangerine is one of the funniest, most entertaining films I’ve seen this year, and I implore everyone to check it out when it becomes available and to spread the word.