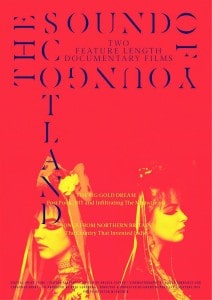 These days, the concept of record labels and bands being on indies versus majors has all but faded away with the advent of the internet and easy, cost-effective methods to self-distribute music. Back in day, bands would strive to get signed and often be presented with the decision of staying on a small indie label or heading to a major label, most likely gaining more fame and wealth but a the cost of their artistic integrity.

Big Gold Dream takes this concept and focuses in on two indie labels, FAST Product and Postcard Records, formed in Scotland during the height of the punk rock movement in the late seventies. It explores how these two labels, although humble in size, would help shape the sound of pop music in the UK, and eventually in America as well, through their eclectic rosters of bands, including Scars, Orange Juice, Josef K, The Human League and Dead Kennedys.

FAST Product, established by Bob Last, began as a punk label but seemed to quickly shift gears into a more experimental post-punk style as the trends in pop music began to shift in the early ’80s, laying the groundwork for what would later become British New Wave.

Postcard Records, on the other hand, featured a much more accessible, radio-friendly stable of musicians, creating more catchy Motown-infused pop tunes. This label was established by the notoriously difficult Alan Horne, who did not appear in the film.

Structurally, this documentary plays out exactly how one might expect with any rock doc. Director Grant McPhee interviews most of the major players in the scene from that time, with plenty of concert footage, music videos and archival interviews interspersed.

For someone not entirely familiar with these labels or all the bands on them, Big Gold Dreams packed in a truckload of information in its two-hour runtime. It balances the discussion of the labels and the bands fairly well, but the amount of people involved and shear onslaught of history being thrown at you can prove to be confusing at times. I was also having difficulty picking up everything the narrator was saying, however the version I saw had an incomplete audio dub so I’m assuming this will be corrected in the final product.

For music history aficionados who are interested in the story behind the sound of young Scotland in the ’70 and ’80s that paved the way for many of the pop groups to become big at that time, Big Gold Dreams is worth checking out. You may also find a few bands you never previously heard of which is always a nice bonus.

The Big Gold Dream – Trailer 1 from grant mcphee on Vimeo.