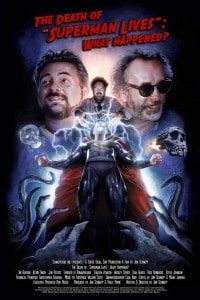 Believe it or not, there was a time when comic-book films, particularly those involving superheroes, weren’t en vogue. Theatres were inundated with sub-par comic-book heroics.  It may also come as a surprise that it was less than 20 years ago when the only game in town was Warner Bros. and DC Comics. Marvel Comics was bankrupt, and no movie had ever broken the triple-digit milestone for an opening weekend.

Between June 16, 1995 (the release of Batman Forever) and May 2, 2002 (the eve of Sam Raimi’s Spider-Man), only six films based on comic books were released, and only two of those broke the century mark at the box office, according to Box Office Mojo.  Comic book adaptations weren’t making money and were not generating the business that Tim Burton’s Batman did just six years prior.

Around 1996 there was hope that this was about to change. Great buzz and curiosity was circling around the first significant adaption since 1989. Tim Burton was to direct Nicolas Cage in a new Superman film, Superman Lives, due to hit theatres sometime in ’98-’99. After years in development and millions spent on pre-production, the film died.

Jon Schnepp’s entertaining and enlightening documentary, The Death of ‘Superman Lives’: What Happened? takes viewers behind the scenes and looks at what was, what was to be and what caused the ambitious production to end. Schnepp’s film joins two equally entertaining documentaries, Jodorowsky’s Dune and Lost Soul: The Doomed Journey of Richard Stanley’s ‘Island of Dr. Moreau’, which both look at ill-fated productions by notable directors.

It’s quite interesting to look at films in hindsight, especially when different iterations had sprung forth from what those directors intended. Superman Lives is no different. Schnepp pulls back the curtain on what was going to be a very ambitious take on the Superman mythos.

Schnepp starts at the beginning by interviewing people involved in the development of the production, including screenwriter Kevin Smith, costume designer Colleen Atwood, producers Lorenzo di Bonaventura and Jon Peters, as well as production artists. They discuss what was planned at the time and are often quite frank with their recollections of their time on the production. 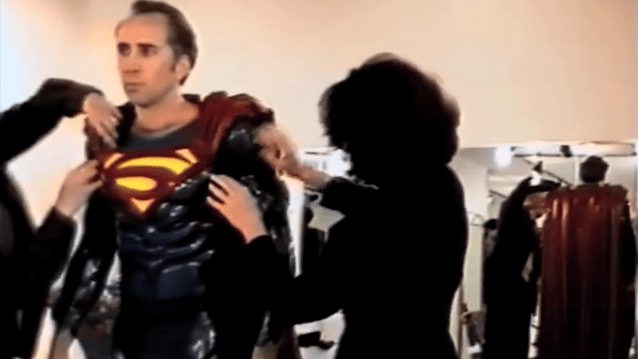 As the film progresses, we follow the development process as a director (Tim Burton) comes on board, and new writers, including Wesley Strick and Dan Gilroy, take passes at the script. Members of the visual effects teams and production artists share their stories about how they came on board and what they had to develop for the film. Casting is also discussed, Kevin Spacey as Luthor, Christopher Walken as Braniac, Chris Rock as Jimmy Olsen and perhaps Sandra Bullock as Lois Lane (she passed). The costume was a very important aspect of the production, and there was plenty of time spent developing its look.

While Nicolas Cage himself is not interviewed, he appears in archival footage and provides enough detail about what he wanted to achieve with his take on Superman. Burton and Cage’s discussions during costume fittings are entertaining and intriguing. Schnepp has assembled the most footage you will likely ever see of Cage (who actually didn’t look as bad as one would think) dressed as Superman and Clark Kent. The film continues to follow the project as it draws to its unexpected conclusion, which was a mere three weeks from production commencing.

Thanks to the film’s chronological structure, it’s easy to see how the project derailed. You see the pieces that ultimately undid the film begin to fall into place. Through the interviews, you also get a sense of what the filmmakers were hoping to achieve and how their ambitions and the business market itself were its undoing.

In Schnepp’s interview with Burton, you can see the wounds of the production are still there. It’s remarkable he agreed to talk about the film. It’s clear that Burton was excited about making his Superman; a Superman movie that would have clearly had his fingerprints all over it.

There are many people in the film with many great stories to tell, but it is producer Jon Peters who steals the show. Schnepp’s interview with Peters is quite funny, informative and very entertaining; he could easily carry a full documentary about his life in Hollywood.

The Death of ‘Superman Lives’: What Happened? is an eye-opening look at how a big-budget production could and did fall apart. In particular, it’s a great examination of the zeitgeist of comic-book films at the time. It was still an untried genre on which major studios still weren’t ready to roll the dice. Schnepp’s documentary is a great examination of what could have been, but it also opens a Pandora’s box of questions about what would be, had it happened.

For this viewer, the fact that it didn’t happen is a good thing for so many reasons. Thanks to the many interviews, test footage, costume footage and shared artwork, one gets the sense that this would have been a unique take on the mythos that could have either made or broken the genre’s future. Comic book fans can find the film playing at various festivals and conventions preceding its global release on July 9. Check the official site tdoslwh.com for details.