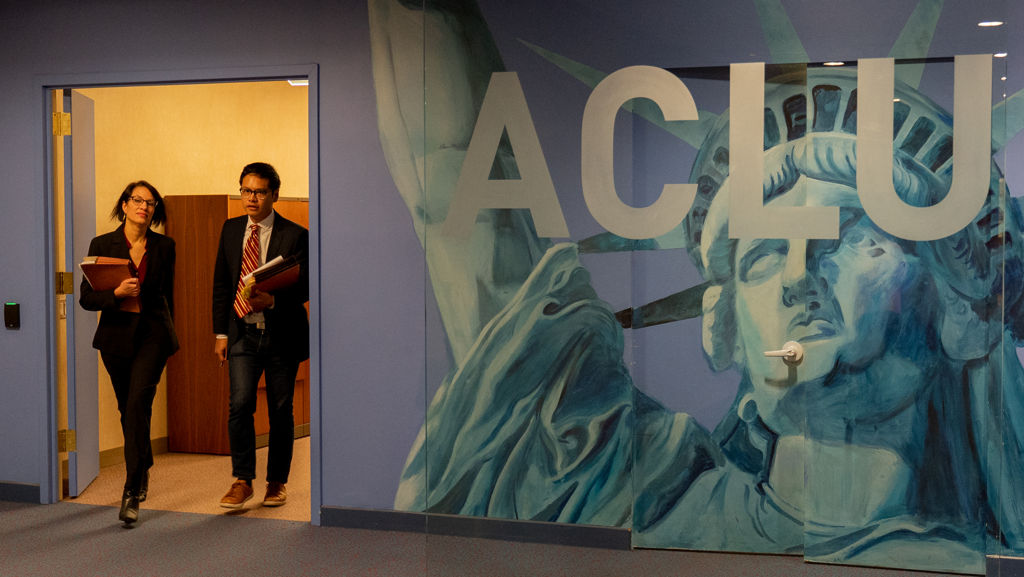 Donald Trump appears in flashes during The Fight, directed by Eli B. Despres, Josh Kriegman and Elyse Steinberg. At rallies and at his inauguration, he utters soundbites that have lasting repercussions.

When he disappears, it’s left to the public and the handful of lawyers at the American Civil Liberties Union, the ACLU, to untangle his words. At least, that’s what this documentary is saying.

Donald Trump bad, ACLU good. The “good” comes with a caveat, however, opening up a counter narrative of the ACLU that fails to be fully fleshed out. Without more on this alternate side, everything stays black and white, when there should be more grey.

Much of the film’s focus is on four cases, most of which concern everyday citizens fighting for their constitutional rights. Lee Gelernt, an immigration lawyer, focuses much of his time on the various versions of the Travel Ban, as well as immigrant family separation.

He takes on a case entitled Ms. L v. ICE, where an asylum seeker had her daughter taken away. Brigitte Amiri is the lawyer in reproductive rights, and her case, Garza v. Hargan, concerned a pregnant, 17-year-old girl who had come over the border. She ended up in the custody of the Office of Refugee Restatement and was being blocked from having an abortion.

Chase Strangio and Joshua Block gathered plaintiffs for Stone v. Trump to combat the ban of transgender persons serving in the military. Dale Ho works on the voting rights side, and in the case of Department of Commerce v. New York, was trying to stop the citizenship question from becoming part of the census.

Attempts are made to add personal touches by showing the lawyers at home (Ho), protesting (Strangio), drinking “train wine” upon winning a case (Amiri), and searching for phone chargers on two occasions (Gelernt). The scenes of each lawyer reading a hate postcard or listening to a voicemail from a disgruntled citizen are genuinely hilarious. With so much seriousness, at least the staff can still find humor.

The office tour, where the lawyers give their own take on the place, comes across more as a “work for us” ad and doesn’t quite have the humanizing effect it should. When Block expresses his hesitation to argue his case as a cisgendered person and when Ho practices in front of a mirror — curses flying, trying to get his statement right, as he’s not argued in front of the Supreme Court before — these scenes show their realness, as well as the care and thought they put into their jobs. For this reason, it would have been great to have interviews with them regarding the notable Unite the Right Rally in Charlottesville in 2017 and how they felt about the ACLU’s involvement in the event.

Only a small portion of time is devoted to the not-so-favorable clients and cases. The ACLU helped the Charlottesville Rally become a reality, and although the ACLU says they are not responsible for the death of Heather Heyer, their involvement in the case makes it hard for them to distance themselves.

These moments are just blips in the film, and by bookending the documentary with human rights victories, footage of protests and heartbreaking photos of children separated from their parents, it’s easy to forget the negatives exist. The version of the ACLU on screen is the universal one.

This film is missing the critical lens on leadership and structure, the spice to make it interesting. And it’s not that we want to drastically change the way we view the ACLU, we just want to zoom in closer to see the flaws and to know that, like their lawyers, the organization is complicated and human.

The work the ACLU does is vital, and this documentary reinforces that notion. The controversial aspects that are presented create a more complete picture than will probably be in the minds of many viewers. As stated in the film, the ACLU has a cyclical nature, often taking one step forward and two steps back, and the same can be said of this documentary.

It does a great job of showing important decisions made over the last couple of years but takes two steps back in allowing the audience to form a deeper outlook on an organization that has a lot of influence. Yet we all know what can happen if power ends up in the wrong hands.