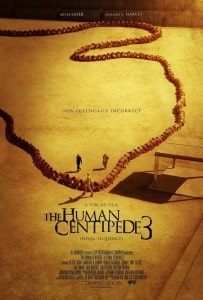 In 2009, a little horror film – The Human Centipede (First Sequence) – broke onto the scene and became a notorious sensation. In the film, a mad scientist creates the first “medically accurate” human centipede, where three individuals’ digestive systems are fused together into one gruesome tract.

It was a decent horror film that wasn’t as gruesome as one would expect considering the subject matter.  Much of the horror was presented subjectively, and it proved rather affective. In the 2011 film The Human Centipede II (Full Sequence), Director Tom Six changes tone and takes a meta approach to the subject matter, and this time he doesn’t hold back on the gore, creating a very dark and twisted sequel that is better than the original in many ways.

In it, a disturbed loner takes his obsession with the film The Human Centipede too far and creates his own twelve-segment human centipede in gruesome detail. Six has now returned with the concluding chapter, The Human Centipede III (Final Sequence), and once again, he changes the tone of the film, which this time proves to be the film’s undoing.

Prison warden Bill Boss (Dieter Laser) and his accountant, Dwight (Lawrence R. Harvey), find themselves under the gun when Governor Hughes, played by Eric Roberts, threatens to fire them if they don’t get their prison population under control. After numerous harsh methods fail to quell the inmates, they decide to try the unexpected. They will create the first prison human centipede. However, before they can even try, they need to be sure it’ll work and so they seek the advice of Six – the creator of the Centipede films. 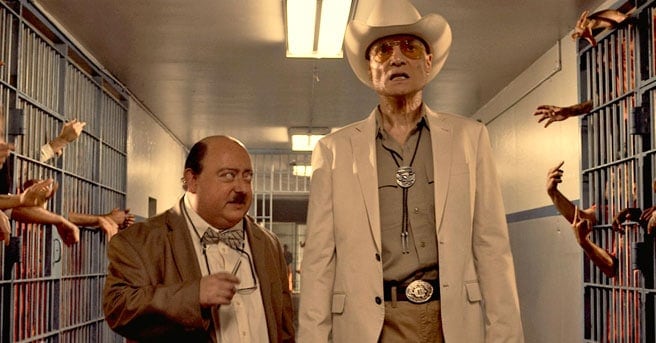 Six must be commended for wanting to change things up with each new installment. However, his desire to create something new and original with each new entry is not evident here, as it is riddled with every cliché in the book. Every move is telegraphed, and as a result, the end product is incredibly dull.

The film is a satire of the United States penal system and its stance on capital punishment. It’s pretty clear that this entry shouldn’t be taken seriously. Because it is very much self-aware, it becomes a parody of the previous films’ premise. At 102 minutes, this satirical comedy is just one excessively long, drawn-out, one-note joke that really takes too long to get to its very flat punch line. This new film is just an exercise in excess.

The film isn’t as gruesome as the previous film and is surprisingly tame in the gore department…well, at least when compared to the last one. Six instead decides to go balls-to-the-wall politically incorrect to deliver the desired shock value, pretty much jumping into Uwe Boll territory, and fails miserably.

Returning to the franchise as a lead character, Laser gives one of the most over-the-top, unfiltered, what-the-hell-am-I-watching performances you’ll likely ever witness. You’ll likely be wondering what he was on and if he had a stroke while performing. It’s about the only reason to see the film; hopefully someone will just do a compilation of his scenes so one doesn’t have to sit through the rest. He’s incredibly bad, but you simply can’t take your eyes of him.

Harvey, also returning as a lead character, played the loser in the last film and returns here as a new character and delivers a decent comedic performance. The film also features Tommy “Tiny” Lister, Bree Olson and Tom Six in a cameo. There were some humorous bits to be found in Six’s cameo, but overall, the performances were pretty flat. The first two films were actually better performed, yet this one has returning actors in it – go figure.

Sadly, the final film is a weak conclusion to the trilogy. It’s not very funny, not very shocking and not very original. Outside of watching Dieter Laser chew the scenery, there really is nothing here to barely even warrant a recommendation. Fans of Uwe Boll films may find something to like, but fans of the Centipede series may not enjoy it. After all, the only reason anyone would watch it is for the centipede, but you have to sit through more than an hour of unoriginality to get there. Be warned, this film won’t shock or disgust you; you’ll be too bored to care.