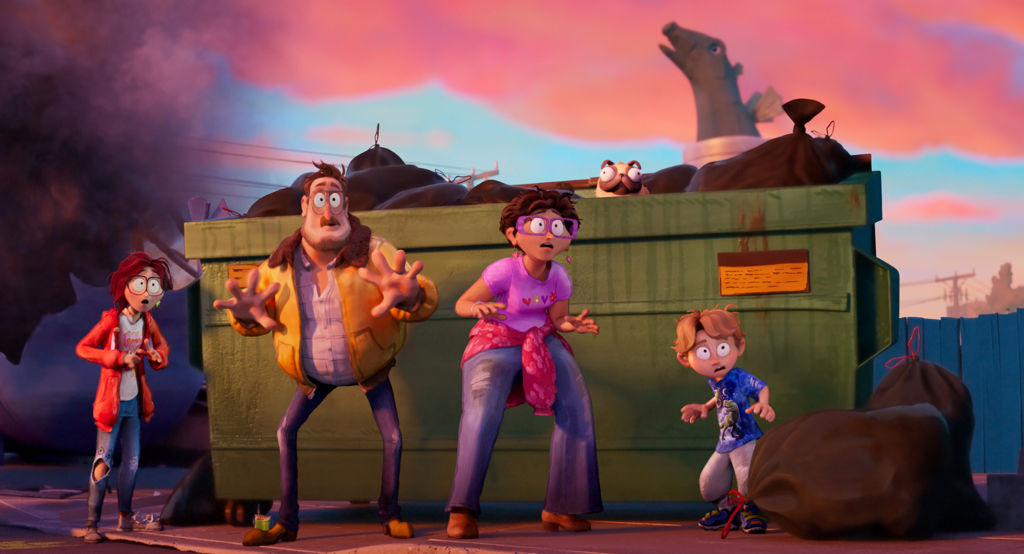 The filmmaking super-duo, Lord and Miller, are back, this time teaming up with Michael Rianda and Jeff Rowe, two of the creative minds behind the wonderful Gravity Falls, to bring us The Mitchells vs. The Machines, an animated comedy that comes hot off the heels of Spider-Man: Into The Spider-Verse and contains every bit of that film’s charm and style, though it may not reach those same lofty heights.

Produced by Sony Pictures Animation and being released on Netflix, this family adventure features the voice talents of Abbi Jacobson as Katie, a film-obsessed teenager who gets accepted into art school in California but whose rocky relationship with her dad, voiced by Danny McBride, makes her journey out west a bit more complicated.

In order to mend their connection, Katie’s dad decides to cancel her plane ticket and instead kick off a family road trip, driving her cross-country with her mom (Maya Rudolph), little brother (Rianda) and their family pug, Monchi. Things get off to a decidedly rocky start, but the trivial family squabbles are soon forgotten when a tech billionaire accidentally unleashes an army of sentient robots onto the world that decide they want to get rid of all humans.

At its core, The Mitchells vs. The Machines is a heartfelt comedy about the bonds of family and learning to accept and embrace each other for our varying interests and quirks. It’s a simple premise that’s elevated by the ample amount of humor and the fun dynamic between the colorful cast of characters.

Like so many other action-comedies of this ilk, the funniest moments are front-loaded and the bigger action set pieces taking center stage in the later acts, and while there’s a more defined balance here than some others, the action sequences were not nearly as strong as the family-road-trip elements. It was the robot invasion that forced Katie and her dad to realize their stubbornness toward each other and inevitably causes them to rekindle their bond, however the actual robot scenes were far less interesting than simply watching the Mitchells attempt to pull off this family trip.

Olivia Coleman voices a Siri-like AI that’s behind the robot uprising, and she’s fantastic as always; Eric Andre plays Mark Bowman, the young, conceited tech giant who invents, and is eventually imprisoned by, the robots. This sci-fi look at our possible future seems to be reminding us to unplug once in a while and reinforce our real-life connections with one another, but this sentiment isn’t quite as focused as the smaller story with Katie and her father, though the messaging does intersect throughout.

Utilizing the same animation style as Into the Spider-Verse, the film is bathed in vibrant color, accentuated with doodles and drawings that evoke Katie’s energetic Youtube shorts, a visual style that’s thankfully set apart from standard Pixar-style CG animation. It makes for  a memorable aesthetic, juxtaposing the Mitchells old-school, somewhat analog existence with the neon-soaked synthwave vibe of the monolithic robot home base.

Hilarious and wildly entertaining, The Mitchells vs. The Machines is an absolute gem and one of the few must-sees of 2021 so far. The snappy animation, great voice acting, and fun character moments make this a family-friendly movie that adults will appreciate as much as kids. Also, the simple presence of Monchi gives this film major bonus points.