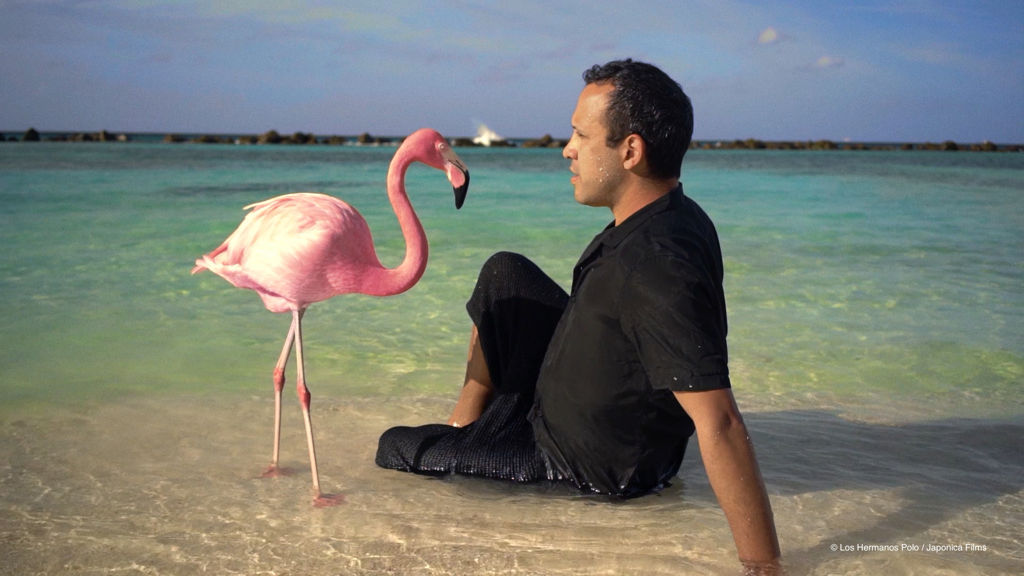 Consider the pink flamingo. Curved neck, hooked beak, penetrating yellow eyes and perched on one scrawny leg with the other securely tucked into its plumage, fashioning its signature pose.

For most, this striking bird is a brief object of amusement, possibly even seen simply as plastic effigies decorating a garden or stitched symbols adorning a novelty Hawaiian shirt. For the likes of director Javier Polo Gandia (Europe in 8 Bits), this garish bird is an object of intense fascination around which he builds his latest film in order to uncover the apparent “mystery” of why their image remains so ever present and influential in our culture.

Presented with a docufiction approach that focuses on a bland sound engineer (as played by chiptune musician Rigo Pex) who suddenly becomes obsessed with the flamingo and begins to believe he sees the image of the bird everywhere he goes, the film takes the form of a journey of self-discovery for this character, using the iconography of the flamingo as his map so to speak. In his desire to understand his recent fixation, he traces the influence of the flamingo across the world and interviews a nebulous assortment of figures with some level of insight to help unlock the apparently elusive meaning of this pink being.

These assortment of “experts” include an animal biologist, a dancer, a graffiti artist, filmmakers Eduardo Cassanova and John Waters, collectors of pink flamingo merchandise, an art historian, musicians Kero Kero Benito and Allee Willis, “the Pink Lady of Hollywood,” a person who owns a factory where they make plastic flamingos, and others with some connectable association to the flamingo, no matter how tenuous.

Even with this guiding structure of a proposed self-discovery journey for Rigo Pex, The Mystery of the Pink Flamingo can never escape a feeling of scattershot assemblage. From its thin justification of a premise for the sake of its investigation to the arbitrary feeling that hangs over all its chosen interview subjects, the film feels like a product of free association rather than an actual investigation.

When the film’s insight on its subject is on point and fascinating is usually when the discussion is centered around the flamingo’s value as kitsch and its aesthetic legacy in relation to camp and “bad taste.” This could be due to these interviews with proclaimed practitioners of kitsch, such as Waters, Willis, Eduardo Casanova and the flamboyant “Pink Lady,” being far and above the most entertaining sit-downs the film has to offer, but mostly this is where the film feels like it has a detectable direction and thesis. When it is freely revolving around “the idea” of the flamingo, the film can find itself on a tangent with no discernable direction.

Speaking of, Gandia proves himself a fan of visual tangents, not to mention his film is frequently interrupted with his own garish flourishes, accented by the cinematography of Guillermo Polo. These bizarre sequences, which could include the likes Rigo swimming naked in a pink pool or being chased by hundreds of people with flamingo pool toys, pop off the screen with gaudy luster.

While visually striking, they never feel organic and instead feel as if the filmmakers are working to push the film’s focus even further away from its stated focus. Much like the bird it directly focuses on, the aesthetics of The Mystery of the Pink Flamingo feel flashy but ultimately (as the film proves) aren’t as ideologically full of depth as you first assumed.

Gandia’s film is certainly an oddity, a uniquely structured documentary with a commitment to its wayward exploration of its topic that can indeed wow you with its visuals and carry you through its amorphous investigation. Yet this unstructured approach is more to its detriment, as the film always feels like it is chasing an ever-elusive direction or purpose.