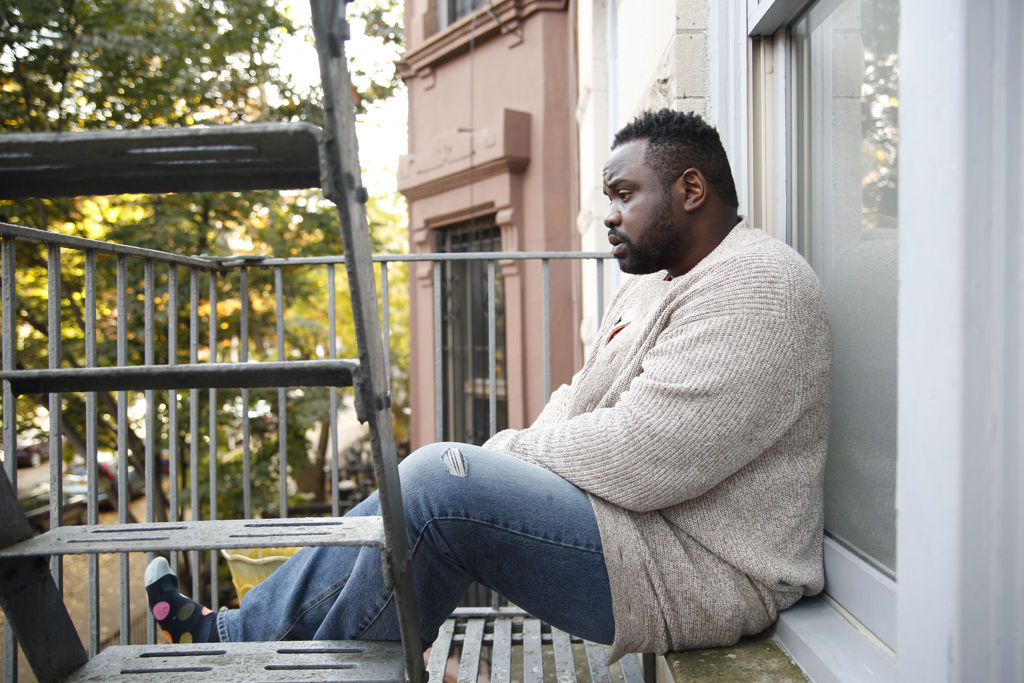 Most of us have forgotten where our keys are. Whether it’s our car keys or house/apartment keys, it’s happened to all of us. And if it’s not your keys, it’s your wallet; and if it’s not your wallet, it’s your ID. That’s why we do the ‘pocket pat downs’ and the ‘purse check,’ but sometimes we still lose them. In The Outside Story, directed by Casimir Nozkowski, Charles (Brian Tyree Henry) experiences this universal frustration firsthand.

After receiving a food delivery and coming back to his apartment, Charles grabs some cash and runs outside to catch the delivery guy (Jordan Carlos), who he didn’t tip. When he gets back upstairs, he pulls out a set of car keys belonging to his recent ex, Isha (Sonequa Martin-Green), and realizes that he forgot his apartment keys inside.

Charles is an editor for TCM in-memoriam reels for celebrities considered “at-risk,” and an actor named Gardner St. James is on his deathbed so Charles needs to get back in to finish his assignment. To make matters worse, he forgot his shoes, and just the thought of wearing socks around New York City gives me the chills.

For the first time Charles has to interact with his neighbors without Isha, who’s served as a buffer, creating relationships with them when he didn’t. Their breakup is familiar: one person cheated, and the other is insecure and jealous and can’t seem to accept an apology; but it’s also more than that, as we’re asked these existential questions and wonder how healthy jealousy is for relationships and, if someone you loved kissed another, whether you would forgive that person.

The film seeks these answers while Charles explains aspects of the breakup to numerous people and flashbacks of Isha creep in. Despite the depressing backdrop, the film finds its humor in Tyree Henry and the surrounding neighborhood weirdness. Recently, Tyree Henry’s been a sidekick or the comic relief, and those type of laughs, the circumstantial and forced ones like in Godzilla vs. Kong, get tiresome quickly, but here, the responsibility of the humor doesn’t fall solely on his shoulders, giving him the dramatic moments needed to process the relationship.

Each neighbor encounter creates momentum with its own quirks and story, sometimes taking Charles on mini adventures. There’s Officer Slater (Sunita Mani) in charge of parking, who tickets everyone parked outside of Charles’s building and who takes Charles to some great food spots but then ditches him after he asks her out. He also encounters Andre (Michael Cyril Creighton), who’s uptight, is in a throuple and reluctantly gives Charles the use of his fire escape so he can get back into his apartment, as well as his bathroom after all the food he tried goes south.

A member of Andre’s throuple gives Charles the most sage advice on his situation, that “life is short” and jealousy is a “poison and it steals your life force.” Then there’s Elena (Olivia Edward), who plays the piano beautifully but often doesn’t want to due to her stage mom putting too much pressure on her. It’s her piano playing that causes Charles to really sit in his emotions, as his eyes close and tears fall when listening to her piece.

Through each of these stories, we’re further entrenched in this neighborhood, where everything looks so normal and carefree. And through these moments we mourn the type of spontaneity it displays that’s so uniquely New York City. This film is special, and part of its charm is to want some of the simplicity it captures, which hopefully isn’t gone for good.