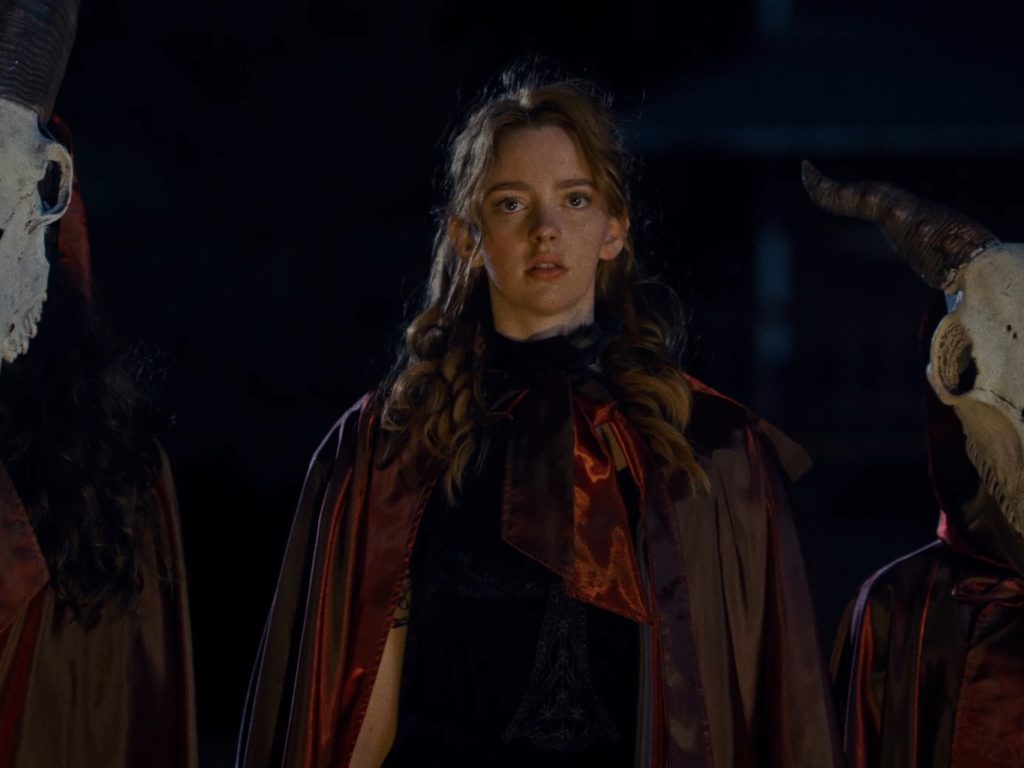 I love the idea of blending the Western and horror genres, but it’s not something we’ve seen too much in the past. I loved 2015’s Bone Tomahawk; and then there was 1999’s cannibal movie, Ravenous, which was pretty great too; and there was also Tremors 4: The Legend Begins, but it’s best we not relive that one. With the recent trend in folk horror, the market is rife for more of these genre mashups, and Aaron B. Koontz’s The Pale Door is a great start, presenting the perfect blend of cowboys and train robberies alongside supernatural terror.

Playing out like a Western version of From Dusk Till Dawn, the film involves a gang of robbers who pull off a train heist — only, instead of finding a safe full of riches, they uncover a trunk containing a young woman.

After their leader, Duncan (Zachary Knighton) gets shot during the robbery, the young woman tells the group that her village is nearby and they have doctors who can help him, so they decide to take her home. When they arrive, they find a mostly dead town, save for one brothel that is teeming with beautiful women who take them in and begin showering them with food, drink and…companionship. All is not as it seems, however, as the group soon realizes these women are actually a coven of witches looking for their next source of power.

The Pale Door works best when it’s a high-energy mashup — blending action, horror and a sprinkle of comedy to liven things up even more. The gang itself is composed of a colorful cast of characters, including Noah Segan, Pat Healy and Tina Parker as some of highlights but who are also unfortunately relegated to minor-character status. Devin Druid plays Duncan’s overly emotional younger brother, and Bill Sage plays Dodd, the rough bad boy of the group.

Where it falters is in its attempt to create drama and evoke some kind of sympathetic reaction from the audience. On multiple occasions we witness these earnest heart-to-hearts between characters that inch toward something genuine but never quite mesh with the crazy witch action that we actually want to see. And when we do see the witch action it’s kinetic and satisfying.

The witches in their true form are creepy as all get out and prove themselves to be more-than-formidable foes against this gruff band of outlaws. It’s an ambitious film that seems to stretch its budget to the limit and it has some awesome set pieces to boot.

With Koontz’s anthology film, Scare Package — which hit Shudder just a couple months ago — and now The Pale Door, which is a flawed but fun Western horror, it’s clear this is a director who has a true love of horror cinema and whose next project I’ll be eagerly awaiting.