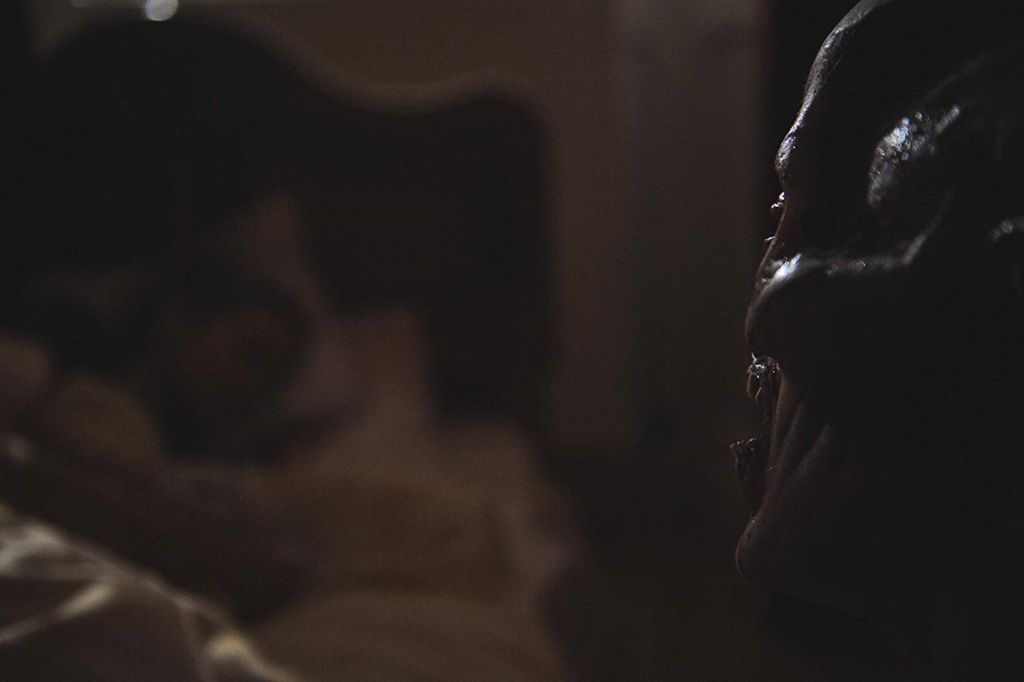 Whether or not writer-director Paddy Murphy intended it, his feature length debut never really shakes the uncomfortable framing of pro-life propaganda disguised as middle-of-the-road horror allegory. The unfathomable attempt by The Perished to weigh in on the unending abortion debate and to try and say something compelling between the cheap, unexplained scares and facile haunted-house aesthetic it trades in makes Murphy’s film rather inscrutable.

Even to give it the benefit of the doubt and classify the film as a half-baked metaphor for the very real medical trauma associated with an abortion procedure, The Perished plays its hand a little too forcefully in its telling of a twenty-something woman quite literally haunted by the demonic manifestation of her aborted fetus. Subtlety is always the horror filmmaker’s best friend, and I can only assume Murphy’s film forgoes this for the sake of ill-advised agenda pushing.

The transgressor in the film is Sarah Dekker (Courtney McKeon), who is presented early on as an irresponsible individual who doesn’t understand the consequences of her actions (i.e. partying and pre-marital sex). As Murphy’s script throws her frivolousness in her face in very forced moral posturing (despite her inevitable pregnancy resulting from the ineffectiveness of contraception and not from poor decision making), she opts for an abortion after being thrown out by her parents and distanced by her boyfriend (Fiach Kunz). The procedure goes fine, but for the crime of terminating her pregnancy, she pays the immeasurable cost of an intense, traumatic terrorizing by the spirit of her fetus.

Holing up with friend Davet (Paul Fitzgerald) until the post-surgery symptoms pass, she becomes victim to some peculiar phenomena that seem to only enforce to the audience how “bad” the decision she made is. Haunted by the distorted (stock) sounds of infant tears, sporadic and excessive vaginal bleeding, and a demonic apparition of her unwanted fetus who attempts to crawl itself back into her body, I wonder how one is meant to interpret the loaded implication of these images if not solely as a thinly veiled admonishing of her choice. The film even makes a point to set Davet’s home as a former Catholic-run facility for unwanted pregnancies and thus the site of a “mass baby grave” (the film’s words, not mine) whose collective spirits are searching for a new mother.

The issue is of course not that this subject is in poor taste, far from it. The Perished could have greatly benefited from being less serious about itself and airing more on the side of exploitation, rather than the dry morality play or Very Special Episode it aspires to be. The horror is reserved, ineffectual and clouded by the film’s need to make several superficial statements about abortion rights. When the demonic fetal apparition appears and starts haunting Sarah, the tonal shift it represents is so mishandled that it delivers more befuddlement than scares.

Moreover, The Perished is plagued by just plain, cheap production. This is unavoidable in certain circumstances of independent film of course, but when the sound mixing is so off in certain scenes to make dialogue near unintelligible, money was not the only issue at work. Murphy’s directing style is serviceable but bland, and when most of your film is unending, repetetive debates over what your protagonist will do regarding her abortion and her ex-boyfriend, it pays your film no favors. And relying on the sporadic appearance of a fetal demon or distorted crying on the soundtrack to shake things up does not count.

Perhaps it is in poor form to ascribe so much intention to the film, but with its desire to incorporate abortion into its rather rudimentary story of a haunted house, it leaves The Perished  without much room for interpretation. Whether or not Paddy Murphy intended it or not, his film comes across as forcibly pro life underneath its hollow horror aesthetics, and overall his film is not competent enough to exhibit this balance with any grace.