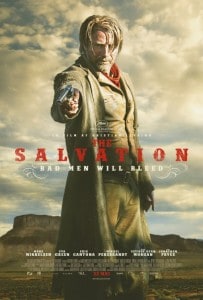 It is 1871 in the American Midwest. After serving in the Danish/German war, Jon (Mads Mikkelsen) and his brother Peter (Mikael Persbrandt) have spent the last several years living on the frontier as pioneers. Jon’s dream of bringing his family to America is finally realized when they arrive in town after they had been apart for seven years.

Unfortunately their reunion is short lived as tragedy befalls them when they encounter a pair of drunken criminals. In short order, the criminals are tracked down and shot dead by the bereft Jon. Unbeknownst to Jon, one of the men he gunned down was the brother of a ruthless local gang leader named Delarue (Jeffrey Dean Morgan), who will do anything to find the man who killed his brother. Jon’s ordeal has only just begun.

The Salvation, directed by Kristian Levring, opens with a crawl describing the period and what the main characters have been doing. Comparisons to the Clint Eastwood’s classic Unforgiven are unavoidable. The villain Delarue seems to be cut from the same cloth as Little Bill Daggett. In fact, The Salvation seems to utilize every known trope of the Western genre and unfortunately follows each of them to their stereotypical conclusion.

I’ve stated many times before that it’s okay to recycle plot devices as long as they are presented in an engaging and/or original way. If we become invested in the character’s plight, we as viewers can forgive things even if it detracts from the film overall.  However, if it’s just going through the motions and we aren’t being offered anything new, then it becomes just another oater. Unfortunately that is exactly what this turns out to be.

Mikkelsen just seems to be on autopilot. The man has range, as can be witnessed in The Hunt, Casino Royale or even Valhalla Rising, but the utter hell his character goes through isn’t well conveyed. The moment Morgan appears as Delarue, I immediately envisioned Powers Boothe in the role, and that likely hindered my ability to buy Morgan in the part. Outside of trying to look menacing and shooting a few innocent people, there really is nothing more to this caricature of a villain. 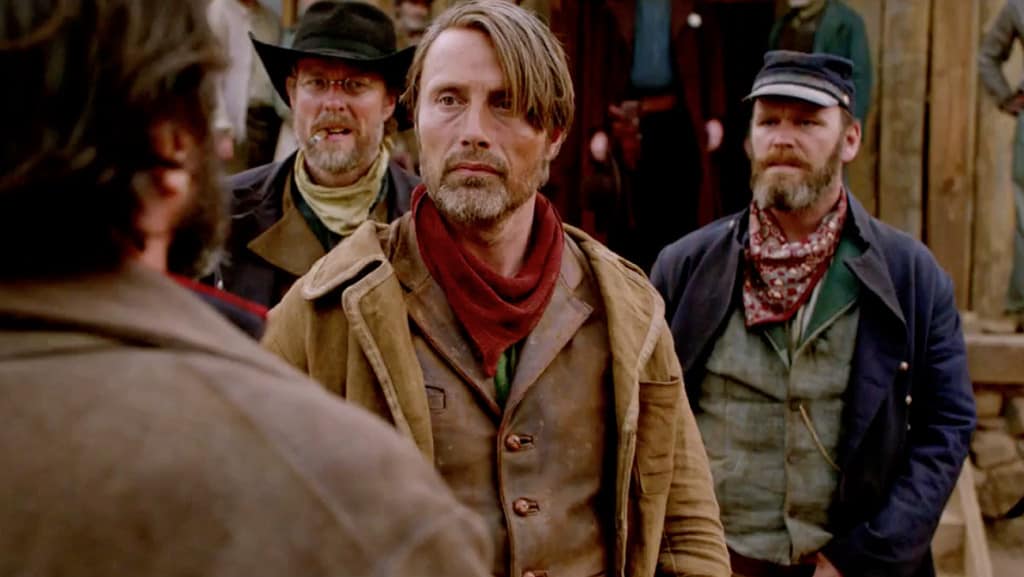 Eva Green also stars as Madelaine, the wife of the murdered brother, who also happens to be a mute. Yes, a mute. Not enough time is spent establishing this character, so often times some of her actions just seem to come out of left field. Would it have been asking too much if she could have simply written a memo from time to time?

Persbrandt’s portrayal of Peter is the only one that stood out. He doesn’t say a lot, but his actions speak volumes and that makes him an interesting character, one who simply isn’t around enough. Rounding out the cast is Jonathan Pryce who plays the put-upon mayor and town undertaker.

There are some themes worth exploring here, such as the depths one would go to for economic gain or to take an “eye for an eye,” but they are presented so on the nose that the film becomes predictable, leaving behind a very generic Western that doesn’t really bring anything new to the table. Even at a brisk 92 minutes, it does at times get to feel a bit long. With actors seemingly just going through the motions, it is rather difficult to get emotionally invested in any one story, and as a result you don’t really care what ultimately happens to anyone. Regardless of genre, that’s never a good thing.