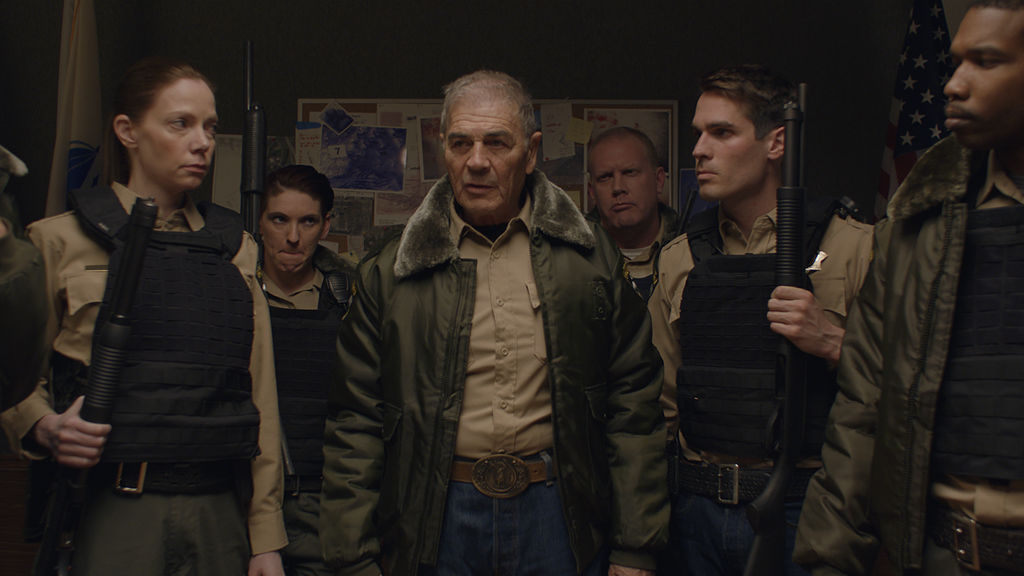 Back in 2018 (which feels like a lifetime ago), I became completely enamored with Jim Cummings’ feature debut, Thunder Road, a dry, dark comedy about a police officer slowly succumbing to his emotions after the death of his mother. Impeccably written and featuring a standout performance by Cummings in the lead role, it ended up being one of my top movies of the year. Now, for his sophomore outing, The Wolf of Snow Hollow, Cummings is back with a horror comedy that doubles down on the same style of humor while adding some satisfying spooks in for good measure.

Playing out like a cross between a Coen Brothers and David Fincher film, combined with that notable Thunder Road sense of humor, The Wolf of Snow Hollow takes place in the titular, fictional town in Utah, an isolated, snow-covered little slice of Americana, where everyone frequents the same diner and knows everyone else by name.

After the brutal killing of a young woman by a seemingly wolf-like creature, the ill-equipped sheriff’s department, led by the great Robert Forster in his final role, must quickly find the culprit before another victim is found.

The story is told from the perspective of the sheriff’s son, John, played by Cummings, who is introduced as a man barely holding it together. As the film progresses, it’s evident that this is as much about him dealing with the stresses of life as it is catching a werewolf.

He’s a recovering alcoholic; he believes his father’s health is failing; his ex-wife is giving him grief; and he’s about to say goodbye to his teenage daughter, who is heading off to college. He desperately wants to become sheriff and prove to the other officers he has what it takes to be a leader, but the pressure is mounting and it’s clear he’s about ready to explode.

This blending of genres is what makes The Wolf of Snow Hollow shine. The progressive dismantling of John’s ability to control his anger adds both a comedic flare to the film and an element of patheticness, while making you feel sympathy for the guy.

It’s not dissimilar to his character in Thunder Road, but it’s not a carbon copy either. Cummings’ biggest comedic heft in exploring the overbearing weight of the world crushing down on his characters, and it’s not only uproariously funny, but it’s also incredibly fascinating, a trend that I hope he continues throughout his career.

Losing Robert Forster before the release of this film feels both sad and strangely coincidental because he portrays an affable sheriff hiding his health issues in order to continue working. It’s a wonderful final performance and reinforces the fact that we lost a truly great actor.

Balancing horror, comedy, mystery and dramatic elements is a lofty pursuit, but with the strong script and strategic editing choices, writer-director Cummings straddles all the narrative facets with ease. It’s a film that knows how to properly pace itself for the most part, attempting to scoop out its flavors in equal parts, never forgetting to keep the audience engaged as the mystery unravels.

With all these parts however, it stands to reason that some might shine through stronger than others, and the actual mystery component is what’s lacking here. The constant pressure to solve the case is a contributing factor in John’s breakdown, and the fact that he and his team were barely finding any clues and inept at any actual detective work, save for Riki Lindhome’s character of Julia, made the mystery feel a bit lacking.

Still, The Wolf of Snow Hollow is a wildly entertaining and funny horror-comedy that manages to set itself apart from the more typical genre trappings by introducing a compelling cast of characters and some deeper themes that one doesn’t typically see in a movie of this ilk.

Thunder Road was a film that I re-watched multiple times, and I can see myself doing the same with this title, quoting the lines and awkwardly laughing at John’s misfortune, hoping to see his ultimate redemption.