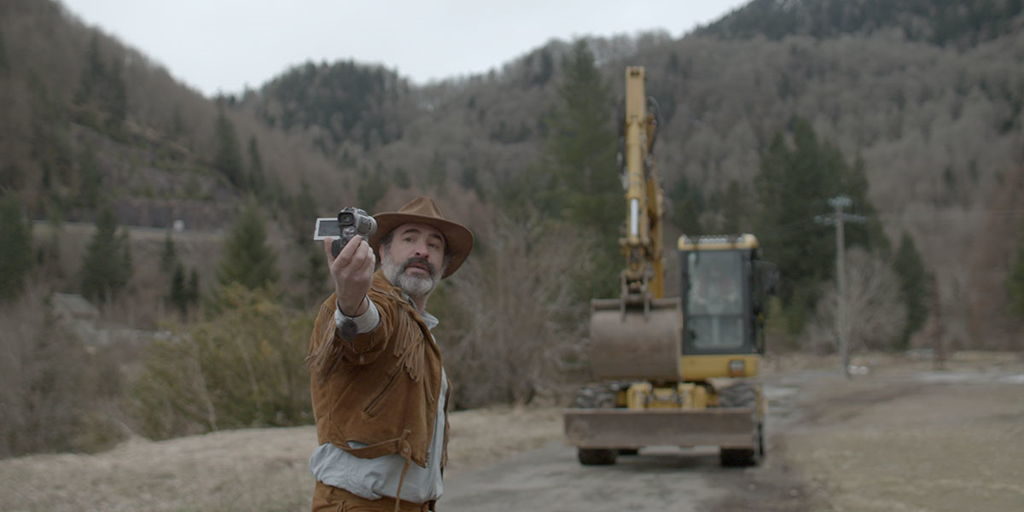 This is a repost of our review from Tiff 2019, Deerskin is available now through virtual cinemas.

Deerskin is the kind of film that tunes you into its weirdo frequency from the jump and suggests you either get it or feel irreparably lost for the next 77 minutes.

A recently divorced man named Georges (Oscar winner Jean Dujarden) drives to a mountain town to resettle, stopping by a rest stop first to stuff his jacket into a toilet. In the throes of a midlife crisis, he purchases a new 100-percent-deerskin jacket and becomes possessed by its “killer style,” obsessively modelling it as he is cut off financially by his wife and is living in this mountain town with seemingly no purpose.

Soon, the jacket begins talking to him, and together they conspire to rid the world of all other jackets so that Georges may be the only one clothed in such a manner, collecting other deerskin items along the way to complete his ensemble. Their plan takes form as he acquires a digital film camera and he convinces an editor (Adele Haenel) to assist him in making a documentary of his quest to rid the world of all jackets…or something like that. 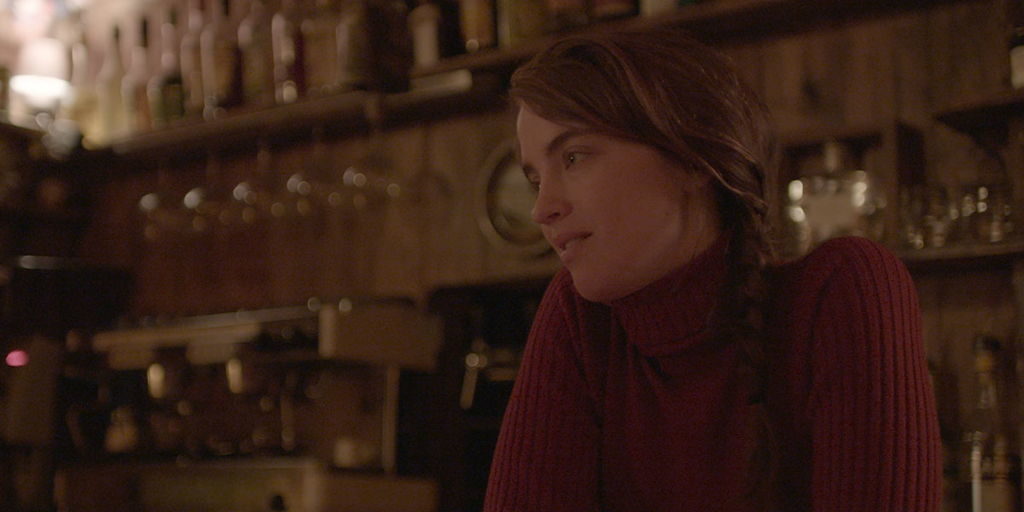 This plot of the living, dominant qualities of an inanimate object over a deeply delusional man’s psyche should not be that surprising coming from Quentin Dupieux, who is best known for the abstract horror film Rubber about the tire that comes to life because…why not? Yet, Georges singular quest to be the only jacket owner and his filmic way of achieving it, by shooting shoddy scenes of him tricking people into handing over their outerwear by pretending to be a real director, is hilariously quirky even for this director.

At its core the film has the two jokes — one about Georges’ obsession with jackets and one about his delusions of being a filmmaker — and the manner in which Deerskin recycles them is downright impressive at times. Within the first 15 minutes, you know the path the film has set out on, and it gives you the option to either indulge its unapologetic weirdness or to  be frustrated by how little sense it makes. 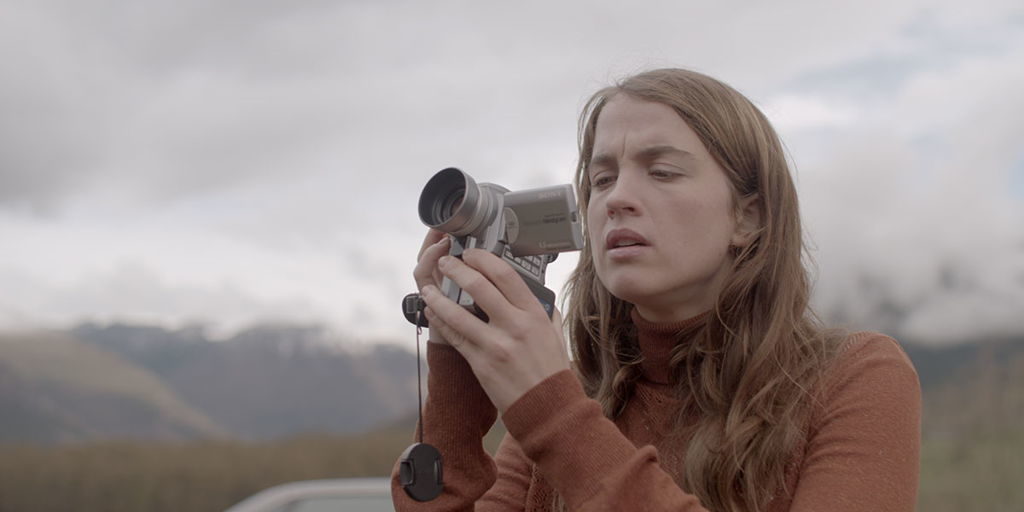 The constant reiterations of these jokes gets tiring unfortunately. It turns out there are only so many ways of showing how obsessed a man can be with jackets, and even as he films cruddy mockumentary-style diaries expressing his deteriorating mental state, Deerskin can get redundant. The film has its one note — which it plays very, very well — and Dujarden gives a surprisingly engaging performance for what is essentially a two-hander with an article of clothing.

Even with its short runtime, the film can feel a bit like a slough. This is possibly due to Dupieux’s clinical stillness, which he aims for with his handheld cinematography or the unpleasant greyness of the mountain town setting. It gives off an appropriate feeling of being a dead end, but I think the real problem is there just isn’t much to Deerskin beyond its two jokes.

That being said, Deerskin operates much like most of Dupieux’s filmography, where “seeing is believing,” and you are compelled to seek them out because their premises are just too out there to summarize properly. It’s strange waves may feel redundant to me, but the film remains such an obstinate oddity — and committed to whatever it is — to not, on some level, appreciate the audacity of it all. 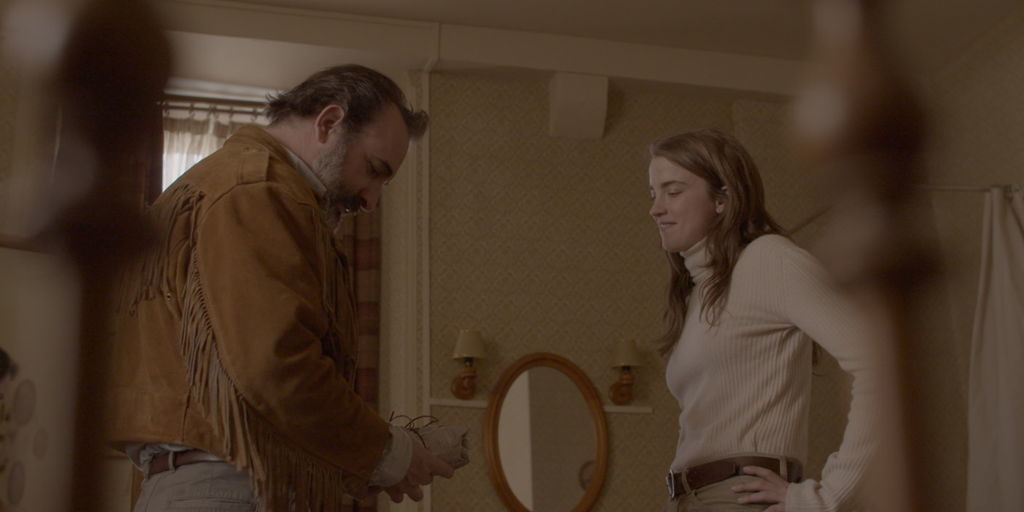 Georges’ talking to himself like the jacket is another person, the peculiar footage he shoots (which inadvertently documents his madness), the string of strange lies he tells as his pre-jacket life crumbles behind him, and all the other sudden, dramatic escalations out of nowhere have their weird charms about them, and it is hard not to get endeared to it. Deerskin benefits greatly from the fact there just aren’t that many things you can compare it to.

I think, at the end of the day, Dupieux made the best possible film one could have made from this oddball premise. It’s one-dimensionality aside, Deerskin still manages to absorb you into its bizarre rhythms and make you feel something for a character whose every action and emotion is filtered through a tasseled jacket. By virtue of its weirdness and its committed performances, Deerskin is worth the price of dispelling your sanity for its short runtime.