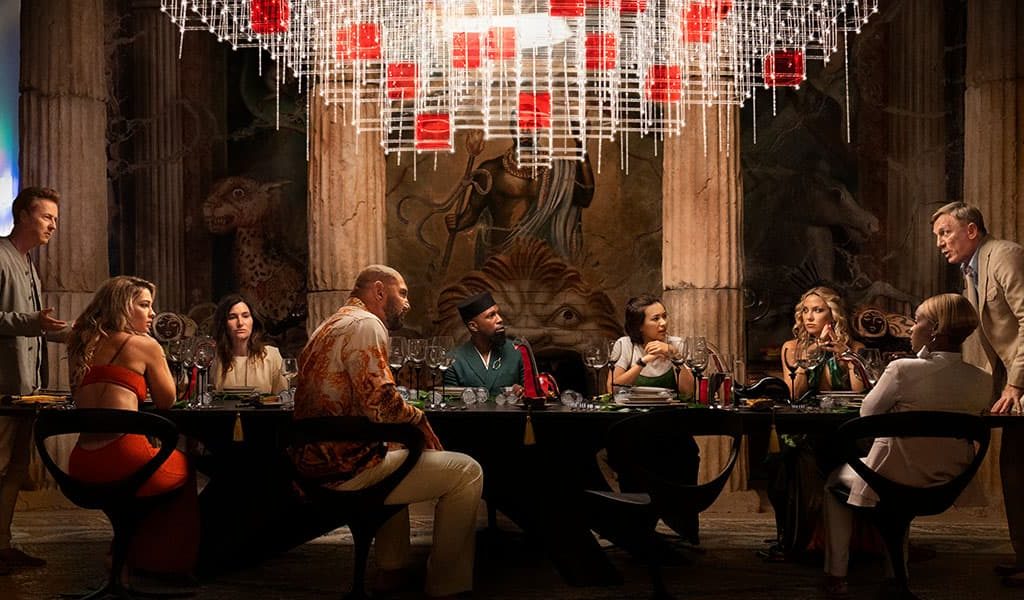 This review is spoiler free, but does contain information regarding the cast members, the location, the time period and the main character’s occupation. No major plot points are revealed.

The central metaphor of the “Glass Onion,” a layered object which nevertheless has its center splayed in plain sight for anyone willing to gaze deep enough into is core, is an all-too-perfect one for the type of “whodunnit” that writer-director Rian Johnson has now spun off into a franchise. The first product of the inexplicable Netflix production deal that outbid rival streamers Amazon and Apple to the tune of one hundred million dollars to have the continuing adventures of Southern detective Benoit Blanc (Daniel Craig) exclusive to their platform, Glass Onion is in every sense of the term a Knives Out film.

Much like the 2019 surprise hit, which saw the gentlemanly, no-nonsense wit of Blanc clash with the hermetic and wealth-obsessed selfishness of the Thrombey clan, a formula for the series is established as Blanc is placed in the company of a new privileged group of “shitheads,” as the script labels them, in a new, exotic location, far removed from the Massachusetts manor of Knives Out. And much like the first one, when murder strikes this unsuspecting yet vindictive group, everyone could be a suspect; every motive is believable; and Johnson endlessly plays with his audience’s desire for a simple solution of who dunnit, to gaze deeper into the onion as he devilishly peels back another layer to his mystery.

Less of a continuation as much as a new installment (but nevertheless maintaining the sequel logic of going bigger for the second time at the plate), Blanc is shuffled away to a remote island off the coast of Greece belonging to impetuous tech billionaire Miles Bron (Edward Norton) for a murder-mystery weekend with a diverse group of hostile acquaintances he has labelled “the disruptors.” Part of an annual get-together to make their opposed walks of life converge, they all gather on Bron’s private island for a weekend murder-mystery game. As you would expect with the eternally greedy upper crust of society, they are all not on the best terms, none less so than ex-communicated Cassandra “Andi” Brand (Janella Monae) who recently took Bron and the “shitheads” to court over her stake in his company. Unlike the first film, which kept the conspicuous characterizations of the ensemble at least contained within the Thrombey bloodline, Johnson allows his characters to serve as unsubtle cartoonish mirrors to timely archetypes with which have become overly familiar in the past couple of years.

A perennially canceled supermodel turned entrepreneur in social media addict Birdie Jay (Kate Hudson). A men’s right activist and twitch streaming meathead in Duke Cody (Dave Bautista). A grassroots progressive political candidate running for Senate on a self-contradicting platform in Claire Debella (Kathryn Hahn). These outlandish characterizations would probably imply a level of dysfunction or unbelievability of the ensemble as a whole, but unsurprisingly, the cast exhibits endearing chemistry with one another and inhabit their animated roles with infectiously funny performances. While their contemporaneous details imply a conscious effort by Johnson to be as “of the moment” as conceivable, the cast works wonders to breathe life into the “very online” caricatures they inhabit.

Johnson’s film delights in being unabashedly ripped from the headlines with much of its dialogue and zingers, to the point where it can come across as so earnest to be charged with being tryhard. Did the film need to be set during the height of COVID-19 pandemic in late 2020? Probably not, but how else was Glass Onion supposed to slip in an Among Us reference and a slew of unexpected Zoom cameos? Johnson’s populist humor is an acquired taste, but the frequency with which the jokes are supplied and the ability of the cast to inject their personality into every line works wonders for a handful of too obvious clunkers in a sea of fantastic punchlines.

And speaking of his writing, Johnson has again designed a maliciously convoluted mystery that teases the audience by setting up the players and playing with their anticipations. Along with Knives Out (which, despite being three years old, will not be spoiled in this review) Glass Onion isn’t so much about pulling at threads to find who committed the crime as much as putting things you have already seen into new, radical contexts. This is iterated mostly through Bob Duscay’s punchy editing and Steven Yedlin’s suggestive, lingering cinematography, which captures the sprawling opulence of the major filming location, an outfitted Aman Resorts villa in Spetses made to reflect the ego of Norton’s tech billionaire character with such palpable intrigue and awe.

But it truly comes down to Johnson’s script in how it mystifies with revealing what was purposefully hidden, not for the sake of being solved or out of contempt for its audience’s desire to solve it, but instead to enjoy the process of how the pieces were put together. It is decidedly pleased with itself for its own intricacy, and honestly it has every right to be as, without going into spoilers, it peels off the layers of its mysterious onion with such masterful control over its story elements that its bombastic, revealing conclusion feels utterly on tone and satisfying.

Those with their reservations concerning the “MCU-ificiation” of Craig’s comely and refined detective character should be relieved to hear Glass Onion is bigger and possibly better than its predecessor. While its deliberate doubling down on what made Knives Out the breath of fresh air into the long-dormant whodunit genre makes it more of the same, there is enough inventiveness with the newly minted formula to ensure the remaining films rolled into the deal with Netflix would be anything but derivative.

The only potential drawback of Netflix funding its own Poirot franchise is the increasing risk of it being deprived of theatrical audiences. Glass Onion is the type of raucous entertaining experiences that deserves the largest audience and largest screen possible.