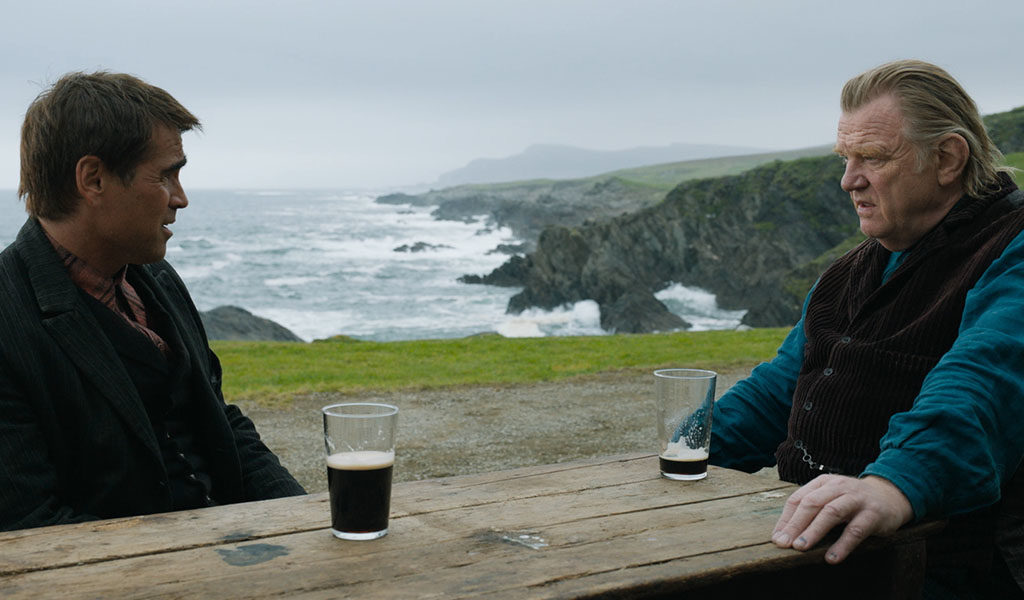 Martin McDonagh’s latest film, crafted from his established, pitch-black sense of humor, is the anti-buddy comedy. Banshees of Inisherin is a “hangout” movie where — rather than focusing on the experiential deepening of a friendship — the sudden, dramatic, seemingly sporadic dissolving of one is mined for all the painfully awkward, uncomfortably honest conversation McDonagh’s script can wring out of the idea.

Reuniting with the comedic duo of Brendan Gleeson and Colin Farrel — whose mentor-pupil dynamic as disgraced assassins in hiding produced staggering, screen-commanding chemistry and endlessly quotable banter in McDonagh’s debut In Bruges (2006) — Banshees exchanges the crass, acerbic witticisms of hardened hired guns forced to kill time in the storybook atmosphere of Belgium for the pastoral quietude of isolated, maritime Ireland, where, at the tailend of a civil war, two lifelong friends abruptly drift apart. Comparatively, the stakes may seem less imperative in its small-town drama setting, but McDonagh’s latest can make the most petty of squabbles between companions feel like biblical morality plays.

Banshees is set in the modest village of Inisherin off the western coast of Ireland, where your daily schedule of chores back in 1923 always ended up back at the only pub with your handful of neighbors. The sanctity of this hushed existence, untouched by the civil war raging on its last legs across the lake, is disturbed by the sudden severance of a friendship of two pillars of this humble community. What initially brought the mismatched jovial dullard and self-described nice guy Pádraic Súilleabháin (Colin Farrell) and quietly intelligent musician Colm Doherty (Brendan Gleeson) is never quite made explicit, but what is made quite clear is that their union had an expiration date.

Accelerated by a recent epiphany by Colm regarding his mortality and the mundane insignificance of their existence in Inisherin, he swiftly breaks their friendship, leaving Pádraic shocked and stewing in stubborn confusion. Determined to discover what changed between them, Pádraic becomes obsessive over his distanced buddy, leading to more dramatic disruptions for this once peaceful colony patiently awaiting the war’s end.

McDonagh’s script harps on the suddenness of friendships’ end and the upheaval of the status quo in transitory times, maliciously letting this quiet bombshell fester in the mind of Farrell’s Pádraic, slowly twisting him into a shadow of his former genial self. Farrell’s character’s descent into desperation and cruelty is mesmerizing to witness against the stony Gleeson, with Farrell playing off his impenetrable hostility with cock-eyed optimism.

The wonderfully awkward chemistry between the two is as thorny and as hilarious as it was the last time that the duo teamed up, and McDonagh allows the degradation of the characters’ friendship to unfurl through a slow-burning series of agonizing social faux pas in a confined environment. Banshees can at times be an embittered cringe comedy about the social awkwardness of avoiding a once-close pal in the intimate proximity of a small village, and at others, a ruinous exploration of your typical ‘nice guy’s breaking point’ when his limited world feels like it is conspiring against him. In both these modes, McDonagh is poignantly reserved with his direction, letting every pregnant pause in conversation between Pádraic and Colm hang with uncomfortable tension.

Reteaming once again with cinematographer Ben Davis and shot in and around Inishmore, the film captures the tranquil gloominess of coastal Ireland beautifully, making it one of the most visually stunning films McDonagh has yet directed. Accentuating the turbulence between its two main characters with the rolling, rocky hills and wide vistas of its setting, Davis gives the fictional Inisherin a palpable, lived-in quality. McDonagh’s theatrically stagey approach to his compositions is utilized well for what very well could be performed on a stage, with nothing much lost in translation, but Banshees makes its pastoral setting feel integral to the drama, like a character in and of itself.

Much like the quaint, touristy charms of Bruges ironically reflecting the darkly cynical outlook of hardened killers, McDonagh brilliantly casts the idyllic agrarian charm of Ireland’s coast to underline the tumultuous social life bubbling under its surface. The move leads to incredibly effective tension for such a scaled-back premise.

Accompanying the engrossing tête-à-tête of Gleeson and Farrell are the welcome presences of Kerry Condon and Barry Keoghan filling out the personality of the minor village population. As Pádraic’s sister Siobhán, Condon steals the show as the enervated yet tender voice of reason to the petty squabble between Colm and Pádraic, providing some of the film’s most cutting and funny lines on the situation. Keoghan’s Dominic, the vulgar public nuisance who acts as Pádraic’s confidant (and who Pádraic uses to feel better about himself), plays perfectly off the actor’s venerable ability to cause discomfort with his performance by beginning as an oafish comic relief until, much like most characters’ dialogue, he turns caustically honest. Across the board, the cast handles McDonagh’s black dramedy effortlessly, knowing how to balance the irreverent quips with the heavy tone shifts.

Coming off of the, in hindsight, contentious handling of racial themes in Three Billboards Outside of Ebbing, Missouri (2017), McDonagh has effectively returned to his roots in terms of setting and subject matter, probing the thorniness of human companionship without the added misplaced ambitions of commenting on how bigotry manifests in positions of authority in Mid-South states.

Banshees of Inisherin is simply about the dissolving of a friendship and how the ripples from this break can upend a town when it is small enough for it to become everyone’s problem. Melancholic and hysterical in equal measures, how the film handles this balancing act so well, given how wildly it can swing between these two modes, is a testament to the film’s distinctive quality.