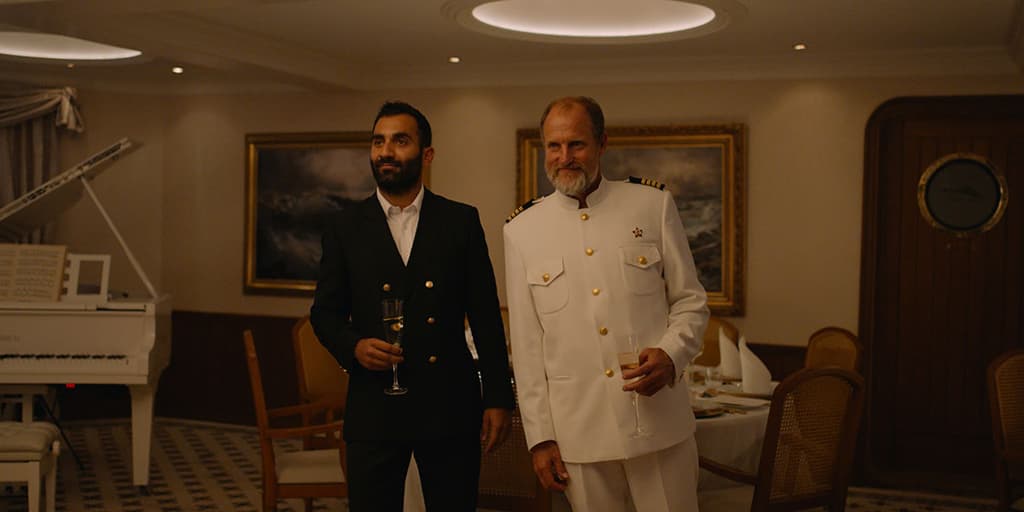 Considering the blunt imagery that the phrase “eat the rich” conjures in one’s mind, is it even possible for a satire that takes this sentiment as its main comedic driving force to be subtle anymore? Or more to the point, should it even want to be, when the present era has shown the disparity between the extravagantly wealthy and the dwindling working class has only gotten more vast and naturally ridiculous?

In the mind of Cannes darling Ruben Ostlund, when the target for his skewering employment of his signature cringe-inducing comedy is the idle rich and their accustomed levels of luxury and comfort, he favors aiming for the nose with the restraint of a executioner dropping the axe at a beheading. His latest, the Palme d’Or-winning Triangle of Sadness, does not have a subtle note in its entire script, which presents its audience with the intended metaphoric takeaway in such heavy-handed fashion that it could easily be misconstrued as a lack of respect for his audience. Then again befitting Ostlund’s cultivating brand, its utter lack of subtlety is also inexplicably its most audacious strength.

The film initially centers on the tumultuous relationship between a power couple within the vainly hollow industry of commercialized aesthetics. It is split into a triptych of misfortune, which ostensibly represents the titular triangle. (In the parlance of the film, it refers to a vapid modeling industry term for the area connecting the eyes and bridge of the nose.) Introduced in the midst of airing out a power imbalance, which becomes thematically rehashed in the many outrageous turns that Triangle takes, the insolent bickering between Carl and Yaya (Harris Dickinson and Charlbi Dean, in what has tragically become her final film role) over who makes more money (she being a highly sought-after social media influencer and he being a struggling male model) and what exactly each gets out of the relationship starts Ostlund’s latest on a strong foot in familiar territory.

Carried by the excellent chemistry of Dean and Dickinson, who make meals out of the booming emotional spats they share, Triangle immediately recalls the disquieting pain and awkwardness of being truthful with each which was weaponized to unbearable effect in Force Majeure. Teaming once again with cinematographer Fredrik Wenzel, Ostlund favors visual stillness with his almost exclusively stationary camera, lingering on his characters and the pregnant pauses the tension of their argument causes. An early highlight of a knockdown, dragout row over a dinner cheque between the two separated by a hotel elevator incessantly attempting to close allows both actors and director to undercut emotional tension with utter absurdity.

The film initially sets up the strife of Yaya and Carl’s disintegrating union as a mildly scathing indictment of the vapidness of those whose income is tied to how good they look, but Ostlund gets more broad and more absurd with the subsequent chapters which take aim squarely on the uber rich. A rather bloated second chapter on a luxury yacht populated with caricatures of the upper class drawn so broadly as to be walking punchlines –- a Russian capitalist (Zlatko Burić) who made his fortunes off of peddling “shit” (fertilizer) to the masses, a pleasant elderly British couple (Amanda Walker, Oliver Ford Davies) who manufacture weapons to “uphold democracy,” a Marxist captain (Woody Harrelson) who begrudgingly serves his patrons while intoxicated, etc. – follows the strong foot of chapter one and Triangle becomes slightly misshapen.

The grotesque spectacle that serves as the film’s centerpiece featuring an extended epidemic of sea sickness befalling the guests in the midst of perfect storm on the high seas is ambitious in terms of Ostlund’s imagination for his set pieces and horrific in its graphic content with its willingness to go there, but it hints at that paradoxical weakness-strength dynamic of his satire. Indulgent as Ostlund is, he allows scenes to endure long past the point of their underlying message being understood. Occasionally, such as with the provocative second chapter, it allows the shock of what he stages to dissipate until the frustrating duration becomes an amusing joke in itself, and other times it just feels like it is dulling the effectiveness of its scornful satire by laying the point in.

Clocking in at just under two and a half hours, the spectacle of the second chapter, coupled with Ostlund’s favoritism toward letting his scenes last and his camera linger, leaves the equally bloated third chapter to drag out into an expectantly funny but rather telegraphed denouement. While it does allow for some of his script’s more poignant and invigorating explorations of his theme of the power dynamics that uphold class struggle (with an excellent turn by Dolly de Leon as an unexpected third-act breakout role), it also thankfully offers his caricatures of the mega wealthy to become actual characters in the shared misfortunes that befalls them.

The prevailing issue being, if one feels Ostlund was deliberately talking down to his audience as he ruthlessly mocked the upper class with reckless abandon and a lack of subtlety, the dramatic conclusion and too-obvious twist to his extensive tirade won’t do much to convince you otherwise. Ensuring the message be so forcefully applied means it can never be misunderstood what he is going for, but nevertheless overly insisted upon, as if “eat the rich ” is as radical today as when the term was coined during the French Revolution.

His satire is a wild, brazen rollercoaster upheld by shock value and pointed cynicism that comes to rest not on a bombshell but a tired reiteration. For what it is worth, the ride shines as a piece of pitch-black comedy over a convincing anticapitalistic statement.