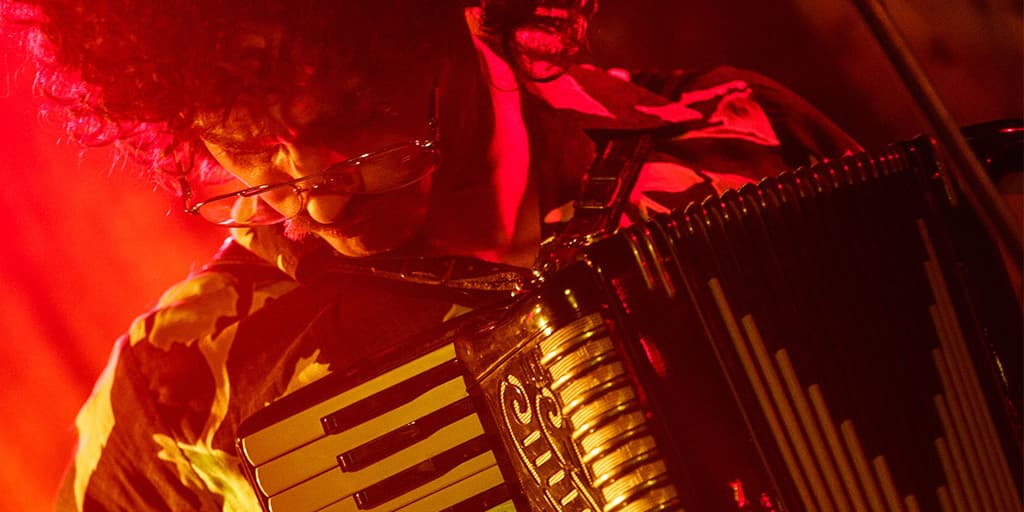 The parodic deathblow dealt to the musician biopic subgenre, courtesy of Jake Kasdan’s Walk Hard: The Dewey Cox Story, has left subsequent genre entries with an unfortunate prospect: either reinvent the formula entirely or suffer under the weight of your own generic conventions, which the team of Kasdan and Judd Apatow so astutely pointed out.

While originally conceived as a direct shot at the formulaic dramatization of the career of Johnny Cash in Walk the Line, the film has come to represent a scathing critique of the entire genre — a cudgel to be wielded against any and all musician biopics to beat down the derivatives upon which they are built. In the case of the career of musical comedian and song-parody savant, “Weird” Al Yankovic, receiving the same treatment, the only sensible course of action in adapting his life is not to work against the perpetual charges of Walk Hard but with them. In Eric Appel’s Weird: The Al Yankovic Story, the road to finding the truth in the life of the man behind “Eat It” is not through truth but through parody.

The product of collaboration between veteran internet sketch site Funny or Die and Yankovic himself, Weird follows in the steps of Walk Hard in distinguishing itself as a spirited parody of the genre itself rather than anything resembling factual biography. Taking creative license with the life of Alfred Yankovic, the film delights in relaying a hyperbolic, overblown and an entirely made-up meteoric rise and fall and rise of a once-in-a-lifetime kind of talent that draws its details from the tired formulas of the biopic genre in an overly on-the-nose manner.

Weird’s script, penned by Appel and Yankovic, parodies the musician biopic with such knowing tongue-in-cheek callouts of its flaws, but much like the benign-song-parody style of Yankovic, it never feels like a critique or deconstruction as much as pithy observation. The result is plenty of laughs at the expense of the tired genre but an otherwise skeletal and hollow-feeling narrative that is stretched uncomfortably around the formulas at which it pokes fun.

Raised by hindering parents (Julianne Nicholson and Toby Huss) who belittle his dreams, despite his preternatural abilities for “changing the words to songs” and the accordion, a starry-eyed Yankovic (Daniel Radcliffe) leaves home to make it big in the music world. Along the way to superstardom, Radcliffe’s Yankovic finds inspiration for his parodies, hooks up with a mentor — one who sees his potential, in broadcaster Dr. Demento (Rainn Wilson) — is tempted into rock ‘n’ roll excess by his manipulative girlfriend Madonna (Evan Rachel Wood), falls victim to his own ego, and encounters numerous adversities that come with the pressures and highs of success, etc.

Committing wholeheartedly to the bit as it does, Weird becomes a superficial story surrounding musician-biopic caricatures who only really exist to be slotted into their roles as dictated by the genre. It’s part of the joke, sure, and a lot of the conventions it pokes fun at lead to some big laughs, but one wonders what the shelf life on such an on-the-nose, surface parody will be. Despite being an exaggerated amalgam of multiple musicians, Dewey Cox still felt like a character, where Weird’s cast are decidedly one-note.

Radcliffe, still thriving in this endearing part of his career that pushes him to experiment with the films he selects for himself, is profoundly entertaining in the archetypal biopic-ified musician. Making next to no effort to actually embody the musical comedian outside of his signature wardrobe and hairstyle. (One of the better jokes in the film that, in hindsight, feels like a shot at Bohemian Rhapsody is Radcliffe delivering his lines with his normal voice and the real Yankovic dubbing his singing).

Radcliffe understood the assignment as written and leaned into the hyperbole with the caricature he plays. Likewise, Wood’s Madonna, who is written as the film’s conniving, succubus-like villain, is steeped more in camp than in impersonation. Mostly Weird’s persistent comedic trick outside of it taking aim at genre cliches is when it serves as an incessant cameo conveyance system to see where Funny or Die can slot in the usual faces of their many online collaborations (“Was that Quinta Brunson as Oprah??”). Either as pivotal figures in 1980s music culture or quick walk-ons, a lot of notable faces drift through Weird’s frame, which are fun to spot but point to the prevalent issue with the film.

What holds Weird back from properly unseating Walk Hard from the throne of music biopic clapbacks is that, despite its best efforts and the abundance of laughs its script provides, it can never truly shake the “feature-length Funny or Die sketch” allegations. Appel stretches what little his film could pull by distilling the biopic down to its bare elements to barely cross the feature-length mark. Weird even draws itself out with a lagging third act that cranks up the absurdity and parody into the action-film genre with a plot involving international crime lord Pablo Escobar (Arturo Castro), which is awkwardly tacked on. Pulling from the “so random” ethos of Funny or Die’s sketch comedy schtick means everything in Weird has the substance and depth of one of its 15-minute YouTube videos stretched out to 108 minutes, and sometimes you can just feel where they are filling for time.

This really was the only way for a Weird Al biopic to go because odds are that the man himself would never want to fit his life story into the self-serious mold of films like Notorious (2009) or The Doors (1991). For what it is worth, at least at its core, the Funny or Die sketch that was stretched thin into Weird: The Al Yankovic Story was one of their better ones, with the laughs coming fast and furious and plenty of over-the-top ridiculousness to cover for the lacking narrative and depth. If Al Yankovic doesn’t take his life story seriously, why should any of us?