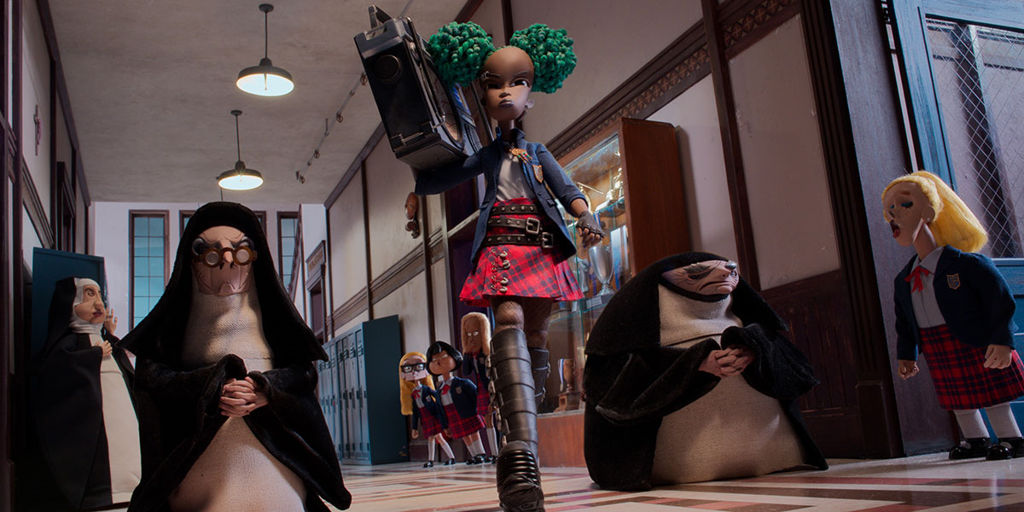 Henry Selick’s long-gestating follow-up project to the acclaimed Coraline (2009), his first and only directorial effort with Laika Studios before departing over contractual negotiations, was ostensibly accepted as a permanent resident of development hell. Not through a lack of trying, the Nightmare Before Christmas director has been tragically silent in the animation world since his fourth animated feature. After a brief, contentious period employed by Disney/Pixar to head a stop-motion division that wielded a handful of canceled projects and an independent production period that bore even less fruit, it seemed unlikely that a fifth feature would ever see the light of day. But much like Netflix implausibly resurrected the permanently stalled final feature from Orson Welles when it released The Other Side of the Wind on its platform in 2018, the streaming giant’s animation division picked up one of Selick’s many projects stuck in limbo the same year they posthumously placed Welles back in the directing chair. The resulting Wendell & Wild, a co-production with Jordan Peele’s Monkey Paw Productions, is Selick’s first released feature in 13 years, and it is clear from the extended inert period when we was caught between projects has done little to dull his craftsmanship (although I’m not sure the same can be said about his storytelling).

Centering on the unlikely relationship between misanthropic pre-teen and junior “hell maiden,” Kat Elliot (Lyric Ross), and her two bumbling, titular demonic charges (co-writer Peele and Keegan-Michael Key) and how this hellish union will come to affect the ownership status of the rapidly degenerating suburb where Kat grew up,  Wendell & Wild starts simply enough. There are two worlds: the human domain, where the orphaned and delinquent Kat – carrying the trauma of the tragic death of her parents into a snooty, all-girls school as part of a “no child left behind” initiative, struggling to accept her losses and pressured to return to her hometown, and the netherwold, where ambitious but idle demon brothers Wendell and Wild work for their gargantuan demon father, Buffalo Belzer (Ving Rhames), who runs a Hieronymous Bosch-esque theme park to torture the souls of the damned. The Laurel-and-Hardy-like demon duo, playing off Key and Peele’s established comedic chemistry perfectly, dream of designing their own hellish theme park, and when they become suddenly, eternally bonded to Kat, they escape to the human world to wreak zany, zombie-raising havoc.

While it is not clear from a first watch how the collaboration between Selick and Peele evened out over the initial idea (which was adapted from an unpublished children’s book written by Selick and Clay McLeod Chapman), the resulting film attempts to overstuff its modest runtime with subplots upon subplots and concepts that rarely if ever are given the time to breathe and develop. While being wary of spoilers, the shuttered suburb awkwardly comes to figure into a confusing Machiavellian scheme of a married pair of real estate moguls who run a chain of private prisons to get the city council to sign onto their development plan. The private school Kat attends is also partially a front for a pair of demon hunters (Angela Bassett and Igal Naor) and run by a crooked headmaster (James Hong), who has nefarious designs for the “no child left behind” program. And when Peele and Selick attempt to congregate these threads into a coherent whole, the slipshod results leave something to be desired and feeling as though it is constantly being pulled in too many narrative directions to truly reverberate.

All these heavy facets and colorful characters struggle valiantly for screen time against one another, resulting in the messy Wendell & Wild irregularly rushing through plot points at a numbing pace – to the point where Kat’s journey to conquer her trauma and discover her connections to the demon world as a “hell maiden” feel undercooked and tertiary, effectively dulled of their emotional resonance. For example, an enthralling, virtuoso scene of a wonderfully executed animated spectacle, where Kat literally and metaphorically confronts a chimera constructed out of fragments of her traumatic past, is given the dramatic weight of what is recognizably a climax, but in Wendell & Wild, it only exists as another subplot in a cluttered flow of ideas.

This glaring flaw aside, Wendell & Wild confirms Selick’s phantasmagoric, stop-motion ingenuity are as intact as when he adapted Neil Gaiman’s novel for Laika in 2008. The meticulously crafted sets and stylized models of Selick’s and Peele’s imaginations overflow with charm and gothic moodiness as the film stages inventive and striking set pieces with noticeable texture and fluidity. Everything from Kat’s punk/goth fashion sense to the theatrical shadow puppet flashbacks and fantasy sequences to Wendell and Wild’s chimeric papercraft concept model for their theme park feels deliberately attuned to Selick’s signature, kiddy-horror style and oozes undeniable personality. On top of all this, the film is exhilarating and heartening to witness in motion with the film’s visually striking puppet models acting in terms with a sense of realism and musicality to their complex yet effortless movements.

Wendell & Wild can be remarkably entertaining when it can sort itself out long enough to let a scene play out or a character develop without interrupting its pace with another story hook. Selick’s return to animation easily wins you over with its painstaking craftsmanship, its forceful sense of distinctive personality, and its playfully morbid imagination. This is all without mentioning that its soundtrack is stacked with classic punk rock acts like Death, Bad Brains, and In Living Color scoring many of its scenes.
Even if the convoluted writing back and forth between Selick and Peele did not result in the most melodious of collaborations, there is enough tactile substance in Wendell and WIld’s tangled execution to celebrate Selick’s return and once again wait on his next project with eager anticipation. Hopefully, Netflix will not force us to wait another decade for a follow-up.