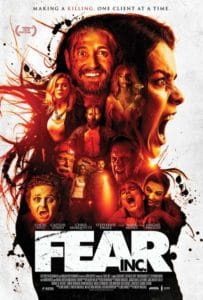 Reading the synopsis of Vincent Masciale’s feature debut, Fear, Inc., it sounded like a horror-themed version of David Fincher’s The Game, a film I’m a huge fan of, so my interest was instantly piqued. While it does indeed draw heavily from Fincher’s film and it in no way eclipses it, Masciale seemingly knew this going into it and instead of attempting to sneakily bite off Fincher, he revels in this emulation, creating a surprisingly funny, albeit flawed, horror-comedy.

Lucas Neff plays Joe, an unemployed horror buff living off his girlfriend’s wealth and yearning to have some real terror brought to him this Halloween. Enter Fear, Inc., a custom-scare service that tailors realistic horror experiences that guarantee a truly horrific time. After inviting over his childhood friend, Ben (Chris Marquette), and Ben’s wife, Ashleigh, to celebrate the holiday, he makes a drunken decision to call the company, despite his friend warning against it and mentioning that his boss tried it out and hasn’t returned to work ever since.

After calling the Fear, Inc. number, a strange voice on the other end says they’re all booked up, and Joe writes it off. But then strange things begin to happen and he believes the game may be on after all. Like The Game, the audience is in a constant state of flux, wondering if what the characters are experiencing is part of the game or if things have a taken a darker turn. Interestingly, however, with Joe being the horror fiend that he is, doesn’t believe any of it.

Even after he witnesses some very real-looking murders, he believes everything is part of Fear Inc.’s plan, so he plays along and attempts to avoid any horror tropes that come his way. All the scares are modeled after classic horror films, from Friday the 13th to The Shining to Saw, but after things begin to get a bit too real, even Joe starts to wonder what’s going on. 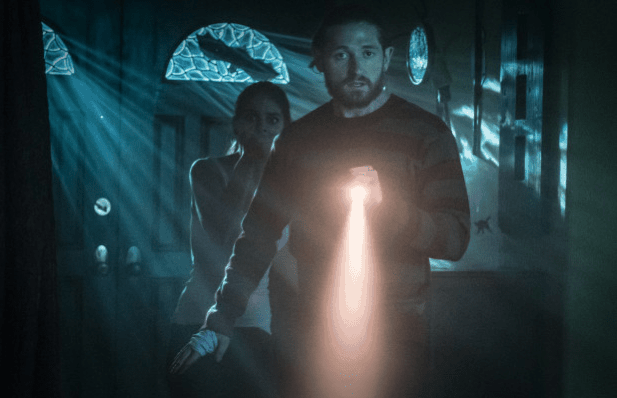 In addition to referencing a bevy of horror franchises, Masciale even has the characters make the comparison to The Game outright, as if letting the audience know he’s fully aware that this is treading similar territory. These on-the nose references are actually a refreshing addition, acknowledging the film as something of a parody, complete with a Scream-esque opening sequence featuring Abigail Breslin.

The film isn’t without its problems, however, the first of which is the character of Joe himself. He’s unlikable at best, and while this may be playing into another horror trope, it doesn’t do the film any favors when the person we’re following for 90 minutes is super annoying. While I was genuinely intrigued to discover the secrets behind Fear Inc., I could have cared less about Joe and found myself more concerned about his girlfriend, Lindsey (Caitlin Stasey), Ben and Ashleigh, who are haplessly roped into this experience.

The other problem I had with Fear, Inc. concerns its ending or, rather, its four endings. I understand that having false endings was a conscious decision playing into the parody aspect of the film, but by the time the last one rolls around, the shtick had been well worn out.

Be that as it may, as a horror buff myself, I still had a fun time with Fear Inc., despite the periodic leaps of faith it takes and the silly, all too numerous false endings it employs.