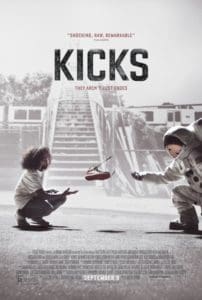 While some people can’t wrap their heads around the idea of sneaker culture or the concept of becoming a sneakerhead, I myself have flirted with the hobby and even supported the idea floating around that sneakers should be officially added as one of the core elements of hip hop. In Justin Tipping’s feature debut Kicks, he effectively injects this culture into a wonderfully scripted coming-of-age story about a teen trying to get back his stolen Air Jordans.

The film centers on Brandon (Jahking Guillory), a scrawny, poor 15-year-old kid living in the inner-city who wants nothing more than to be respected by his peers. After setting his sights on a pair of Jordans he works and scrimps and saves until he has enough money to buy them from the crazy guy who sells hot shoes at a discount from his minivan.

The first day wearing the Retro V. 1s goes swimmingly at first: he impresses his friends Albert and Rico and gains the attention of a pretty classmate who invites him to a party later that night. Unfortunately, Brandon will never make it to that party as he gets jumped by a visiting thug from Oakland by the name of Flaco who beats him up and takes his shoes. Determined to get them back, he enlists the help of Albert and Rico and heads to Oakland to retrieve his stolen merchandise.

Kicks begins with introducing Brandon as a slightly quiet dreamer, someone who wants nothing more than to elevate himself above all the violence and poverty surrounding him. At the beginning of the film, we see an astronaut slowly descending toward him while he exclaims to the audience, “Sometimes I wish I had a spaceship where I could hang out and it’s quiet — and no one could fuck with me.” Tipping sets the tone with this introduction, letting the audience know that this is going to be something special. 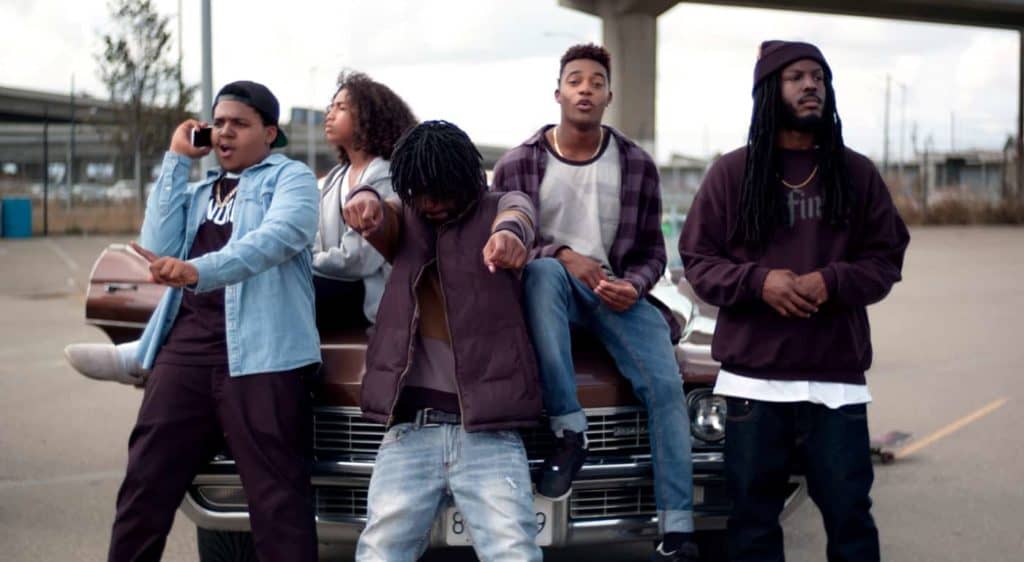 It’s very much a dramatic comedy. While Brandon’s situation is hardly a laughing matter – and the film does explore some very real, socially important and dark subject matter – it’s done in a fairly lighthearted way, mostly through the at-times hilarious banter between the three friends. If you checked out last year’s Dope (and I would recommend it if you have not), there’s a similarity between the two, but I would argue that Kicks manages to outshine Dope in nearly every aspect.

The film is sort of divided into chapters, but rather than numbering them, each is titled after a hip-hop track that plays at the beginning of each, further infusing the hip-hop culture into the film’s narrative, which it’s already heavily steeped in. While this does little for the story as a whole, it adds to the overall style of the film, which peppers in plenty of slow motion and music-video-esque visuals that just make it look awesome.

Kicks is a funny, touching and street-smart coming-of-age dramedy that oozes with style and is propelled by an excellent script and equally great performances. This is an easy contender for my top Tribeca film and should definitely be marked down on your must-see list.