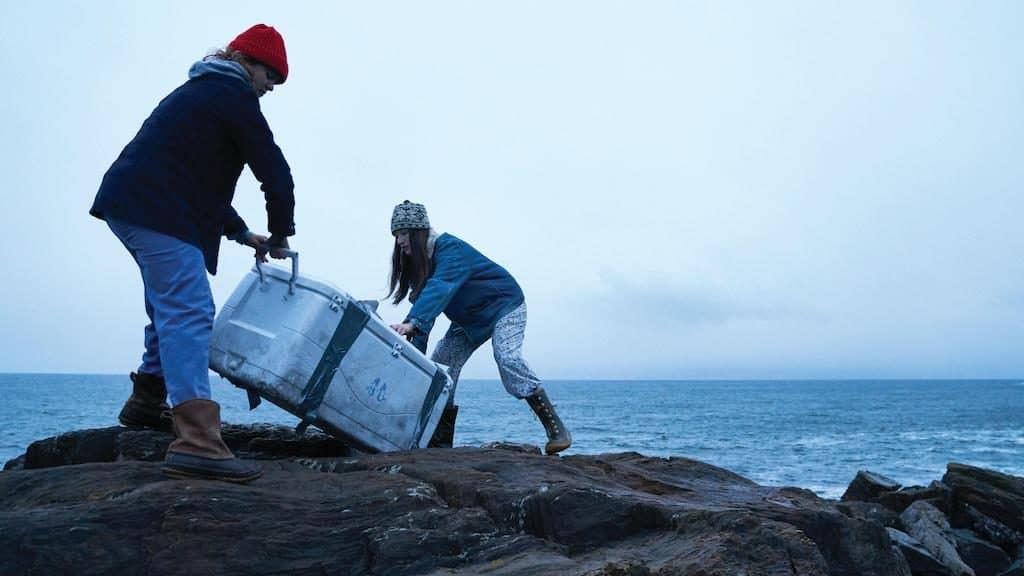 This is a repost of our review from Tribeca 2019. Blow the Man Down will be available on Amazon Prime this Friday, March 20.

Opening with a thunderous rendition of Blow the Man Down, Bridget Savage Cole and Danielle Krudy’s dark comedic noir of the same name hits the ground running even before the gorgeous title card hits the screen. Funny, sincere and consistently enthralling, Blow the Man Down marks an incredible step forward in the careers of its two talented directors.

Set in the cold little town of Easter Cove, Maine, the film stars Sophie Lowe and Morgan Saylor as Priscilla and Mary Beth Connolly, sisters who are mourning the passing of their mother, questioning how they’re going to make ends meet after her illness left them broke and directionless. After a night of heavy drinking, Mary Beth ends up in the car of a scuzzy out-of-towner who is working at the local bed and breakfast that’s owned by the domineering Enid, played by Margo Martindale.

A drunken altercation ensues; Mary Beth discovers bloody clothes in his trunk; and, after a pursuit through a labyrinthian dock filled with crab traps, the man ends up dead. Priscilla aids her sister in disposing of the corpse, but this is where the true mystery begins to reveal itself.

The chilly locale and pitch-black humor felt throughout will no doubt evoke memories of Fargo for many viewers, but Cole and Krudy have crafted something wholly unique here, as the sisters soon discover their podunk little town has a lot more bubbling under the surface than they could have imagined. The Hitchcockian score by Jordan Dykstra and Brian McOmber and act divisions punctuated by stirring sea shanties accentuate the marked noir vibes, setting a bleak tone early and reinforcing the hard-working citizens who call this seaside town home.

Interestingly, considering that this is a fishing port, the principle cast is comprised nearly entirely of female actors, showing who’s really keeping things afloat. It’s a consortium of busybodies, played by Marceline Hugot, Annette O’Toole and June Squibb, who pull all the strings, much to the chagrin of Enid.

Each one of these characters is given plenty to work with in the excellent script, with Martindale portraying Enid similarly to her role in Justified with a villainous, yet motherly, quality, where it’s difficult to not like her despite her nefarious personality.

Blow the Man Down is the type of story that grabbed me from minute one, and the combination of its stark visuals, strong performances from a great cast, and intriguing script kept me glued to the screen. It’s a well executed noir with plenty of comedic moments to bolster an already strong set of complex characters and a killer feature debut for its two directors. Give Margot Martindale an Oscar already.