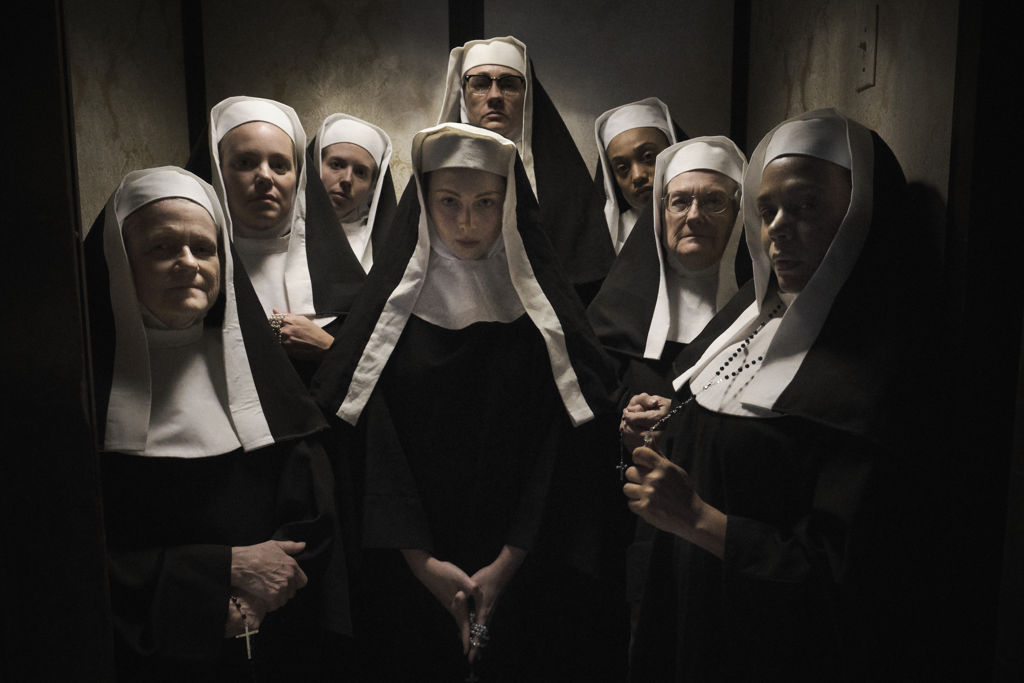 Indie auteur Mickey Reece’s latest, and perhaps most ambitious project to date, Agnes, is at once a conventional, yet massively compelling possession film, as well as a subtle rumination on religion and acceptance of past traumas. It’s not something that will not entirely work for everyone, and unfortunately that includes myself, but Reece is nothing if not a unique storyteller.

Agnes opens with the demonic possession of the title character, played by Hayley McFarland —  a young nun living a quiet life in a convent whose reality comes crumbling down after her body is inhabited by a malevolent force. The news of this quickly gets back to the church, and they send a disgraced priest, Father Donaghue (Ben Hall), and a young man new to the cloth, Benjamin (Jake Horowitz).

The first half of Agnes is a surprisingly humorous, albeit a mildly depressing take on a possession story. Hall excels as Father Donaghue, a man who lost not only his faith, but also himself, after a scandal left him a drunk shell of a man. He believes the church sending him to this exorcism is there last “fuck you” to him before sending him to a church in some far off land to spend the rest of his days in shame.

Benjamin, the neophyte who has yet to take his vows, was likely sent as an attempt to keep Donaghue in line and to report back any shadiness to the church. Both men go into the situation believing it to most likely be a medical issue rather than something supernatural in origin, but both will quickly discover that they are slightly out of their element.

Despite the massive number of movies dealing with demonic possession, it’s through the well developed characters and snappy script that Reece manages to keep things fresh and compelling. Perhaps more interesting is his decision to completely pull a 180 halfway through the runtime and not only change perspectives, but also execute a complete tonal shift. Both halves are successful on their own, one being an entertaining horror story and the other being an uneasy drama about a woman trying to put the pieces of her life back together.

For me, though, the first half was so strong that it was a bit of a letdown to abandon it in lieu of something else. If anything, it’s a very interesting decision and shows that Reece marches to the beat of his own drum, not being bogged down by convention and taking the film where the themes want to go despite what audiences might expect.

What’s frustrating is the seeming lack of socialization that Molly C. Quinn’s former nun, Mary, has in the latter half. She interacts with people as if she was raised on some distant planet, not understanding the concept of being human. We know she didn’t join the convent until later in life so presumably she remembers what it was like to live in regular society.

Agnes is a slow-burn thriller that may not work for everyone, but there’s an undeniable memorability to it that lingers with you days after experiencing it. Despite the tonal shift not completely working for me, it’s a risky endeavor whose strong character moments nearly make up for its stalling in momentum.