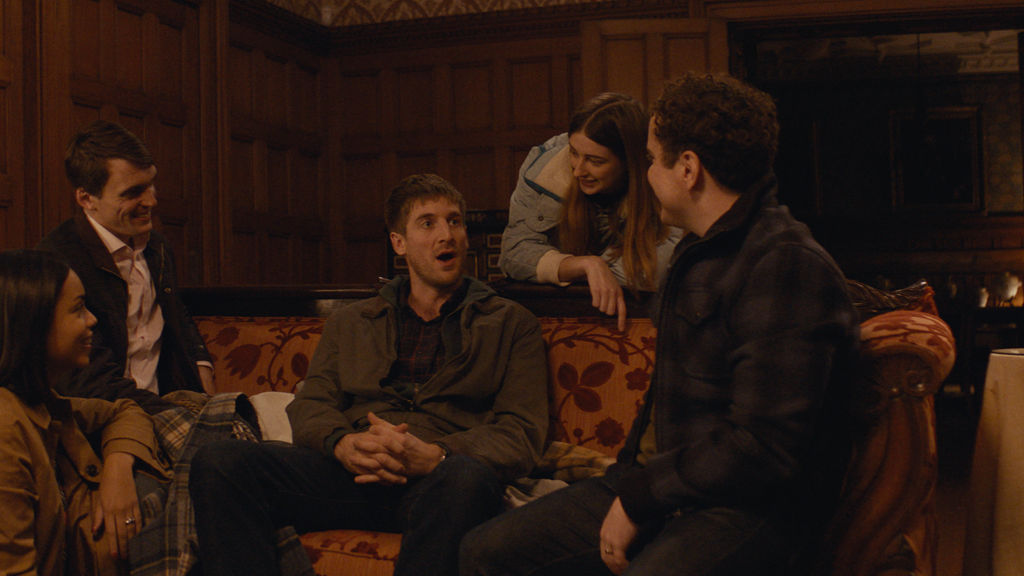 Andrew Gaynord’s dark comedy about distrust and paranoia, All My Friends Hate Me, pits a birthday boy against his supposed friends as they gather for a weekend retreat in a posh manor. Unfortunately, the proceedings prove redundant as everyone involved is pretty awful.

Pete (Tom Stourton) is turning 31, and his “friends” from university decide to throw him a party, despite not seeing him for years. Pete has grown up, worked in a refugee camp, and found a lovely girlfriend who he plans on proposing to, but after just a few short hours, he finds that his friends seemingly haven’t changed at all.

Worse yet, they end up inviting this random stranger, Harry, who they found at a local pub, to the festivities, and it appears that Harry has something against Pete. What transpires over the next few days is Pete becoming increasingly suspicious of not only this Harry person, but all his friends in general.

Where Gaynord’s film excels is in its extreme level of awkwardness. For those who appreciate uncomfortable moments, this title has them in spades. Nearly every moment involves Pete in an awkward situation or saying the wrong thing at the wrong time, so fans of cringe will have a lot to like with this one.

The problems with All My Friends Hate Me don’t really bubble to the surface until the climax, when all the truths, such as they are, are revealed. Both Pete and his friends are intensely unlikable people, mostly comprised of self-centered rich dicks who have zero compelling qualities. Pete himself is also a selfish goober and suspicious of everything around him. This thoroughly unpleasant group of characters isn’t inherently a bad thing; in fact the film remains entertaining despite them. The problem is where the film goes is thoroughly inconsequential and bafflingly mediocre.

Without spoiling any specifics the revelation here is that actually Pete is the asshole, something the audience likely knew from very early on in the runtime. Even after everything gets out in the open the messaging at the end is still completely muddled, making me wonder what any of this was for. Why did I subject myself to this awkward series of events just to have everything fizzle out in such an uneventful manner?

This is the unfortunate thing about All My Friends Hate Me, is that the set up is interesting but where it goes, or rather where it doesn’t go, is simply not satisfying enough to justify the effort.