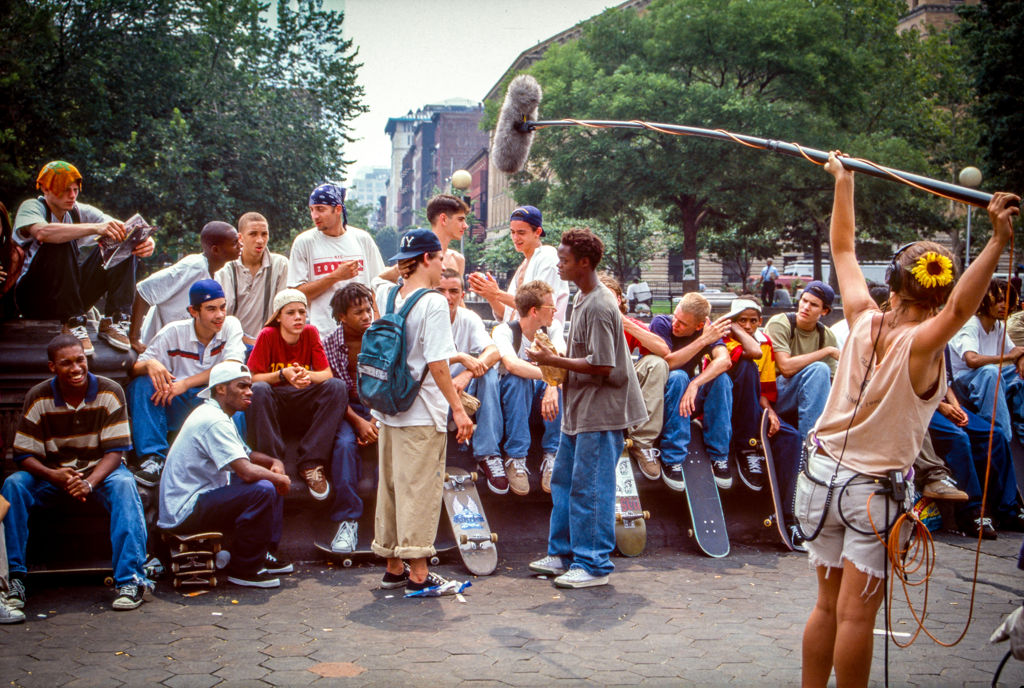 I can’t remember exactly how old I was when I first saw Larry Clark’s film Kids, an unflinching look at urban youth in the ’90s, but I can say for certain that I was way too young. Released in the summer of 1995 and taking the film world by storm, the gritty, hyper-realistic take on NYC’s disenfranchised teens quickly became a cultural touchstone and propelled some of its young cast into stardom, while others struggled to escape their damaging pasts.

Eddie Martin’s latest documentary, The Kids, takes a look at the production of Clark’s film and focuses on the lost skaters who inspired and who would then later even star in one of the most controversial titles of the decade.

While many believed it to be a largely improvised, almost documentary-style film, Kids was scripted by a young Harmony Korine, a then-19-year-old film student who began hanging out with a group of close-knit skater kids who hung out in Washington Square Park. The eclectic group, unofficially led by the charismatic duo of Harold Hunter and Justin Pierce, were part of a large friend circle and eventually drew the attention of Larry Clark, who began photographing the two and their friends and ingratiating himself into their inner circle.

Clark decided to adapt their lives to a movie; Korine wrote the script; and before the kids knew it, they were part of a real feature film project. Clark found the rest of his cast by approaching other skaters and random kids he met in the city, like Leo Fitzpatrick and Jon Abrahams, and by holding an open casting call, which brought in future stars Chloë Sevigny and Rosario Dawson.

The Kids isn’t designed to be just a documentary about the making of the film, however, instead aiming to take a deeper look into the backstory of the actual kids involved and exploring the impact of the film and where they ended up. Sadly, as many of us know, Hunter and Pierce passed away and the film eulogizes them in a respectful manner.

The interview subjects are sparse, with only a handful of the Kids cast present, perhaps resulting in a doc that is focused on the tertiary characters rather than a deeper dive into the broader impact of the film on both those involved and on pop culture as a whole. To not include many of the major players seems like a disservice to what has become an indie classic and, as the film briefly touches on, a major cultural canon.

Neither Dawson, Sevingy, Fitzpatrick, Clark or Korine are featured in the film; it’s stated that the director did attempt to get the latter two involved but that they turned it down. Although it’s not the fault of the director, by not featuring Korine or Clark or being able to hear their thoughts and opinions on the topics discussed in the film, the doc is simply feels incomplete.

This is perhaps the biggest takeaway from The Kids: the perceived exploitation of these kids at the hands of Larry Clark and, to a lesser extent, Harmony Korine. (Archival footage is enough to prove that Clark hardly had these kids’ best interests in mind.) For those two, these kids looked like a lucrative art project, but for many of the kids involved, it was much more; it was an opportunity to cultivate a future for themselves.